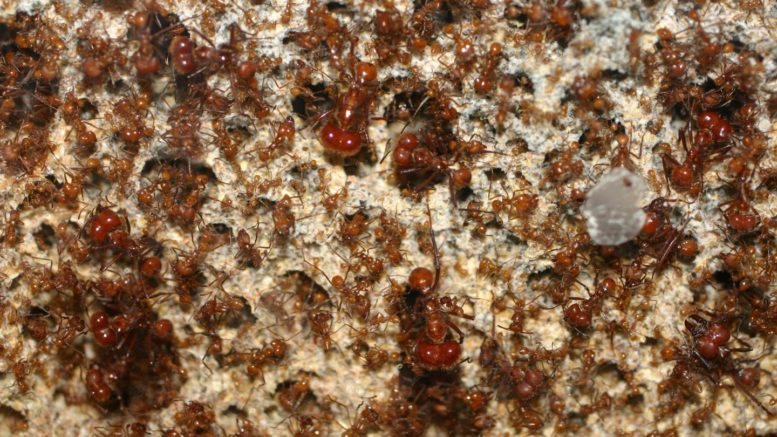 For the last 60 million years, fungus-growing ants have farmed fungi for food. In their cultivation of those fungi, they've successfully relied on bacteria-produced antimicrobial ingredients to protect their crops from other species of parasitic fungi. Now, researchers reporting in the journal Trends in Ecology & Evolution say they are looking to these ants to find new ways to stop or slow the evolution of antibiotic resistance that now presents a major threat to modern medicine.

"Somehow the ant-bacteria alliance seems to have been able to sidestep the problem of antibiotic resistance," says Massimiliano Marvasi of the Università degli Studi di Firenze, Italy. "This led us to hypothesize that the application of potent cocktails of continually evolving variants of antimicrobial compounds was the most likely model by which to explain this dynamic."

Marvasi's team had been studying the fitness of multi-drug resistant pathogens in the environment. While exploring this, first author of the new review Ayush Pathak suggested that they compare what they saw in other environments including clinics to what happens in the fungus gardens of attine ants.

In clinical settings, antimicrobial use leads quickly to the rise of resistant bacterial strains. But the ants weren't having this same problem. The question was: Why?

The researchers say that the secret to the ants' success may be explained by the fact that the bacteria they associate with rely on antimicrobials that vary subtly and continually over time in both structure and combination. This element of surprise, enabled by the presence of gene clusters under selective pressure, allows the ant-associated bacteria to produce ever-changing and unpredictable antimicrobials. As a result, it's much tougher for the parasitic fungi to become resistant, even over the course of millions of years.

The ants' example suggests that mixing and administering continually varying cocktails of slight structural variants of known antibiotics might hold promise as a means to address antimicrobial resistance in the clinic, the researchers say. Along with the continued development of new molecules and classes of antibiotics, they suggest this strategy should now be assessed in the lab and ultimately in the clinic.

"I think the development of effective strategies for mixing subtle antibiotic variants could give a new life to old antibiotics," Marvasi says.

The researchers say the next step is to investigate the effects of selection pressure upon the bacterial gene clusters that produce antibiotic variants. "A better understanding of this relationship and its coevolutionary processes at the genetic level will complement development of new strategies for combating the rise of resistance as well as potentially giving rise to novel antibiotic compounds," Pathak says.