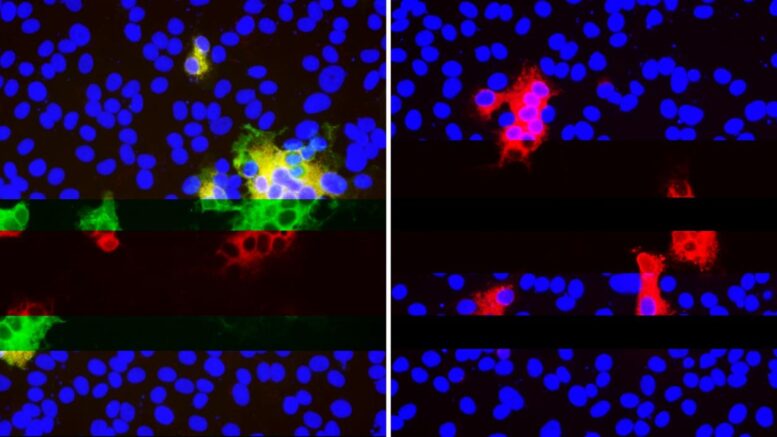 In a recurring pattern of evolution, SARS-CoV-2 evades immune responses by selectively deleting small bits of its genetic sequence, according to new research from the University of Pittsburgh School of Medicine.

Since these deletions happen in a part of the sequence that encodes for the shape of the spike protein, the formerly neutralizing antibody can't grab hold of the virus, the researchers report today in Science. And because the molecular "proofreader" that usually catches errors during SARS-CoV-2 replication is "blind" to fixing deletions, they become cemented into the variant's genetic material.

"You can't fix what's not there," said study senior author Paul Duprex, PhD, director of the Center for Vaccine Research at the University of Pittsburgh. "Once it's gone, it's gone, and if it's gone in an important part of the virus that the antibody 'sees,' then it's gone for good."

Ever since the paper was first submitted as a preprint in November, the researchers watched this pattern play out, as several variants of concern rapidly spread across the globe. The variants first identified in the United Kingdom and South Africa have these sequence deletions.

Duprex's group first came across these neutralization-resistant deletions in a sample from an immunocompromised patient, who was infected with SARS-CoV-2 for 74 days before ultimately dying from COVID-19. That's a long time for the virus and immune system to play "cat and mouse," and gives ample opportunity to initiate the coevolutionary dance that results in these worrisome mutations in the viral genome that are occurring all over the world.

Then, Duprex enlisted the help of lead author Kevin McCarthy, PhD, assistant professor of molecular biology and molecular genetics at Pitt and an expert on influenza virus--a master of immune evasion--to see whether the deletions present in the viral sequences of this one patient might be part of a larger trend.

McCarthy and colleagues pored through the database of SARS-CoV-2 sequences collected across the world since the virus first spilled over into humans.

When the project started, in the summer of 2020, SARS-CoV-2 was thought to be relatively stable, but the more McCarthy scrutinized the database, the more deletions he saw, and a pattern emerged. The deletions kept happening in the same spots in the sequence, spots where the virus can tolerate a change in shape without losing its ability to invade cells and make copies of itself.

"Evolution was repeating itself," said McCarthy, who recently started up a structural virology lab at Pitt's Center for Vaccine Research. "By looking at this pattern, we could forecast. If it happened a few times, it was likely to happen again."

Among the sequences McCarthy identified as having these deletions was the so-called "U.K. variant"--or to use its proper name, B.1.1.7. By this point, it was October 2020, and B.1.1.7 hadn't taken off yet. In fact, it didn't even have a name, but it was there in the datasets. The strain was still emerging, and no one knew then the significance that it would come to have. But McCarthy's analysis caught it in advance by looking for patterns in the genetic sequence.

Reassuringly, the strain identified in this Pittsburgh patient is still susceptible to neutralization by the swarm of antibodies present in convalescent plasma, demonstrating that mutational escape isn't all or nothing. And that's important to realize when it comes to designing tools to combat the virus.

Although this paper shows how SARS-CoV-2 is likely to escape the existing vaccines and therapeutics, it's impossible to know at this point exactly when that might happen. Will the COVID-19 vaccines on the market today continue to offer a high level of protection for another six months? A year? Five years?

"How far these deletions erode protection is yet to be determined," McCarthy said. "At some point, we're going to have to start reformulating vaccines, or at least entertain that idea."