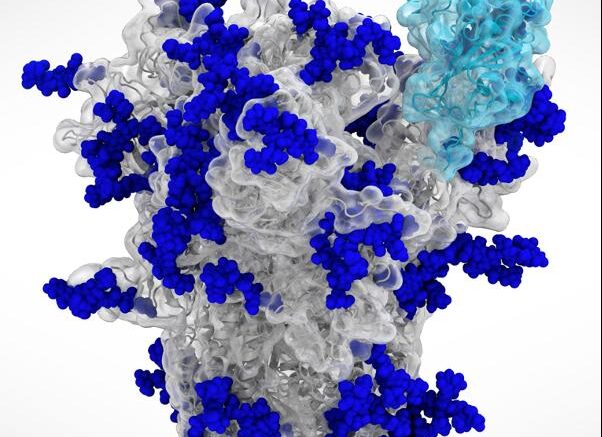 Image of the SARS-CoV-2 spike in the active position. Dark blue glycans shield the spike from the immune system, participate in activation, and stabilize the active form. The receptor binding domain changes shape in order to bind human cells is shown in cyan. Courtesy of Lorenzo Casalino, Amaro Lab, UCSD

One thing that makes SARS-CoV-2, the virus that causes COVID-19, elusive to the immune system is that it is covered in sugars called glycans. Once SARS-CoV-2 infects someone's body, it becomes covered in that person's unique glycans, making it difficult for the immune system to recognize the virus as something it needs to fight. Those glycans also play an important role in activating the virus. Terra Sztain-Pedone, a graduate student, and colleagues in the labs of Rommie Amaro at the University of California, San Diego and Lillian Chong at the University of Pittsburgh, studied exactly how the glycans activate SARS-CoV-2. Sztain-Pedone will present the research at the 65th annual meeting of the Biophysical Society.

For SARS-CoV-2 to become activated and infectious, the spike proteins on the outside of the virus need to change shape so it can stick to our cells. Scientists knew that the glycans that coat these spikes help SARS-CoV-2 evade the immune system, but it was not known what role they played in the activation process. Studying these molecules is tricky because they are so small and have many parts that move in subtle ways. "There are half a million atoms in just one of these spike protein simulations," Sztain-Pedone explained.

Using advanced High Performance Computing algorithms that run many simulations in parallel, the research team examined how the positions of each of those atoms changes as the SARS-CoV-2 spike becomes activated. "Most computers wouldn't be able to do this with half a million atoms," Sztain-Pedone says.

The team was able to identify the glycans and molecules that are responsible for activating the spike protein. "Surprisingly, one glycan seems to be responsible for initiating the entire opening," Sztain-Pedone says. Other glycans are involved in subsequent steps. To validate their findings, the team is currently working with Jason McLellan, a professor at the University of Texas, Austin, and colleagues who are performing experiments with spike proteins in the lab.

There is potential to use the simulations developed by Sztain-Pedone and colleagues to identify treatments that will block or prevent SARS-CoV-2 activation. "Because we have all these structures, we can do small molecule screening with computational algorithms," Sztain-Pedone explained. They can also study new virus mutations, such as the B.1.1.7 variant that is currently spreading, to "look at how that might affect the spike protein activation," Sztain-Pedone says.