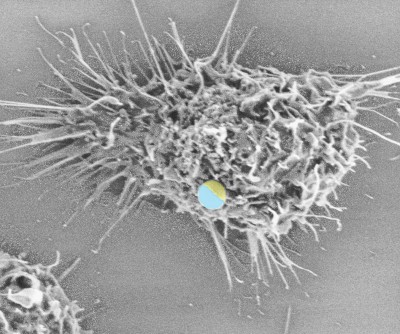 Indiana University researchers have identified a mechanism involving the body's ability to resist fungal infection. The work could help advance research on cancer therapies that use the body's own immune system to fight disease.

In a study published Nov. 18 in the journal of the Proceedings of the National Academy of Sciences, IU scientist Yan Yu and colleagues found that two immune receptors -- named Dectin-1 and TLR2 -- must work together to trigger an inflammatory response that resists fungal infection.

The study's leaders compared the use of two receptors to trigger immune response to the use of two identification codes, versus a single password, in online security -- a form of authentication popularly known as "dual login."

"It was previously known that Dectin-1 and TLR2 enhanced each other's function to achieve maximal immune response against fungal infection," said Yu, a professor in the IU Bloomington College of Arts and Sciences' Department of Chemistry. "But nobody had been able to pinpoint the mechanism by which immune cells manage the receptors to regulate the anti-fungal inflammatory response."

In order to fight infections, immune cells -- also known as white blood cells -- must first identify outside pathogens, which triggers a "search and destroy" response throughout the body. As part of this process, immune cells reply upon specific combinations of immunoreceptors to accurately and effectively detect foreign bodies.

If this process fails, Yu said, people are left vulnerable to life-threating diseases. She added that identifying the specific receptors whose "passwords" work together to regulate proper immune responses may help lead to new treatments for these diseases, as well as improve existing cancer immunotherapies.

To understand specifically how Dectin-1 and TLR2 trigger an immune response, Yu's team created two microparticles -- disguised as fungi -- with different binding patterns on their surface that activate these receptors. They then observed how different patterns triggered different levels of immune response.

By comparing the different patterns against the response to their "faux fungus," Yu and colleagues could see that white blood cells mounted the strongest defense when the molecules that bind to Dectin-1 and TLR2 were placed 500 nanometers apart.

"Both these receptors are regarded as important for stimulating immunity in cancer treatment," Yu said. "This discovery suggests the cancer immunotherapy could be made more effective by developing drugs that target both receptors in a single compound."

Yu added that the discovery was made possible in part by the use of Janus-particles, a nanotechnology named after the two-faced god of Roman mythology, in which two receptors are placed on opposite sides of the same particle. The researchers found that these particles triggered a weaker immune response due to their separation compared to particles where the receptors were paired evenly across their surface. As a result, Yu and colleagues concluded that close proximity played an important role in triggering a "maximal" immune response.

"The unique properties of Janus particles let us 'decouple' the receptors without affecting the rest of the experiment, which was key," she said. "No one had revealed this mechanism prior to our work."

Next, Yu said her team plans to use the study's methods to understand how the immune system resists other nonfungal infections -- as well as ultimately work toward creating new nanomaterials to enhance cancer immunotherapy.

Other authors on the paper were Wenqian Li, a Ph.D. student in biochemistry working in Yu's lab at IU, and Jun Yan at the University of Louisville School of Medicine. This study was supported by the National Institutes of Health.