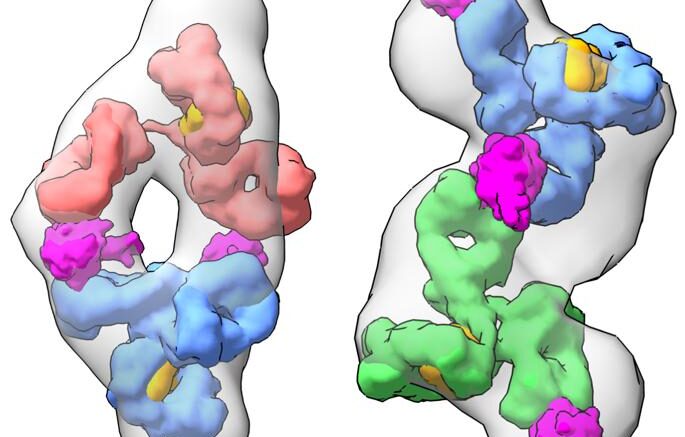 Vaccines are turning the tide of the pandemic, but the risk of infection is still present in some situations. If you want to visit a friend, get on a plane, or go see a movie, there is no highly accurate, instant test that can tell you right then and there whether or not you have a SARS-CoV-2 infection. But new research from Lawrence Berkeley National Laboratory (Berkeley Lab) could help get reliable instant tests on the market.

A study led by Michal Hammel and Curtis D. Hodge suggests that a highly sensitive lateral flow assay - the same type of device used in home pregnancy tests - could be developed using pairs of rigid antibodies that bind to the SARS-CoV-2 nucleocapsid protein. Such a test would only require a small drop of mucus or saliva, could give results in 15 minutes, and could detect a COVID-19 infection one day before the onset of symptoms. Their work was published in the journal mABs.

The current gold standard tests for COVID-19 use a form of polymerase chain reaction (PCR) to identify the presence of SARS-CoV-2 nucleic acid (RNA) rather than a viral protein. They are quite accurate, with false negative rates ranging less then 5% (depending primarily on the sampling site, sample type, and stage of infection). However, PCR tests must be sent away for analysis at an accredited lab.

Rapid antigen tests use antibodies to detect specific parts of the viral particle itself. Current antigen tests have a very low rate of false positives, but are plagued by high false negative rates, and therefore can't replace PCR tests for definitive COVID-19 diagnosis. If a more accurate antigen test was brought to market, it could serve as a helpful initial screening tool similar to how home pregnancy tests work. In the case of a positive result, the user would need to begin appropriate precautionary measures (isolation and other transmission-prevention behaviors) and then have the diagnosis confirmed by an official test at a health clinic.

"As we move toward gaining normalcy and reopening economies worldwide, there is continued demand for rapid, low-cost tests that can be self-administered without the need for a trained professional," said Hammel, a biophysicist in Berkeley Lab's Biosciences Area. "Currently used COVID-19 PCR tests are expensive, at about $100 per test, and on average, U.S. labs are performing one million tests per day. An accurate rapid antigen test could cost $1 each and eliminate the wait time."

Hammel, Hodge, and their colleagues used small angle X-ray scattering (SAXS) performed at Berkeley Lab's Advanced Light Source (ALS) to examine about 20 antibody-antigen interactions. Their data showed that a particular pair of monoclonal antibodies bound to the nucleocapsid protein very strongly and stably, in part due to the antibodies' rigidity. All antibodies vary in their degree of rigidity based on the amino acid sequence of their "arms," which are the part of the Y-shaped molecules that bind to antigens. "The combination of the two rigid antibodies was also observed to increase networking - a process in which multiple antibodies bound to the same antigen at different sites form larger clumps or 'networks,'" explained Hodge, a postdoctoral researcher and first author on the study.

Antibody networking and high binding stability are known to improve the sensitivity of lateral flow assays, and researchers have long speculated that antibody flexibility plays a role in both properties. But studying the physical dynamics of antibody-antigen pairs to find the most effective antibodies is very difficult with traditional imaging techniques, which require the molecules to be stabilized or crystallized. The SAXS technique developed by Hammel and his colleagues allows scientists to examine antibodies and antigens in their natural state, i.e. when moving freely in a liquid.

"We showed that we can rapidly identify new antibody-antigen pairs that result in a more sensitive detection assay," said Hammel. "This technique could be applied to hundreds of antibodies in a short amount of time to identify the most suitable antibodies to achieve as-of-yet unattained sensitivity of antibody-based diagnostics, which are key for early diagnosis of SARS-CoV-2 as well as other pathogens."

The team is now investigating methods of improving test sensitivity even further.

2 Comments on "How X-rays Could Make Reliable, Rapid COVID-19 Tests a Reality"