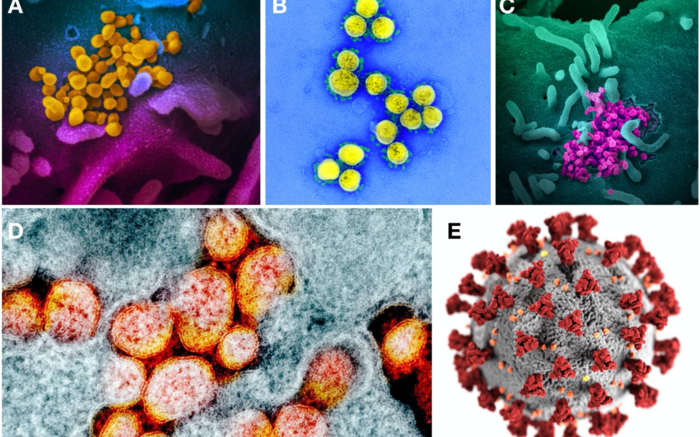 First images of SARS-CoV-2. A, B, C, D: Some of the first images presented with false colors published in February 2020 by the NIAD. E: First public-domain model designed in 3D published on 30/gener/2020 by CDC. Courtesy of Andreu-Sánchez, et al.

According to a study by the Instituto de Radio Televisión Española and the UAB conducted during the COVID-19 lockdown, black and white images of SARS-CoV-2 make the virus seem more infectious. The results, published in PLoS ONE, demonstrate that color and three-dimensional images of SARS-CoV-2 in the media has favored the perception of the virus as a beautiful, but not quite realistic or contagious virus.

The Covid-19 pandemic has produced an increase in the amount of scientific information provided by the media. In many cases, the information related to this crisis is accompanied by images representing SARS-CoV-2. In a previous study, researchers discovered that despite having access to real images of the virus, the majority of images in the media were colored, three-dimensional illustrations of the coronavirus.

To discover how the attributes of the images representing SARS-CoV-2 affected viewers’ perception of the virus, researchers from the Instituto de Radio Televisión Española and the Universitat Autònoma de Barcelona conducted a study, now available in PLoS ONE, in which different images of SARS-CoV-2 were presented. Participants were asked about parameters such as beauty, scientific nature, realism, perception of infectiousness, fear, and the didactic nature of the images. The study also covered formal characteristics such as color versus black and white, 2D versus 3D and photo versus illustration and how these affect perceptions of the virus.

The study concludes that the beauty of the coronavirus images is more likely to be seen in color and three-dimensional images. And these are the images that are most used when informing about SARS-CoV-2, despite the fact that the real images of coronavirus are black and white, two-dimensional photographs. In this sense, the research discusses the role media has in distributing images that beautify the virus with the aim of informing about the pandemic.

Researchers also found a negative correlation between the beauty detected in the images and their didactic value. The more beautiful the images were perceived as being, the less educational they seemed to spectators.

The results of this study can be applied directly to the scientific communication sector, in the design of communication plans and protocols in situations in which the behavior of the population as a whole is key.

Dr. Miguel Ángel Martín-Pascual from the Instituto de Radio Televisión Española and lecturer at the Department of Audiovisual Communication and Advertising at the Universitat Autònoma de Barcelona, as well as author of this study, considers that, "The media has a great responsibility in providing the correct information to its audience, including the images used. There is a need to evaluate whether beautified images of coronavirus not corresponding to real photographs of the same virus is a practice that, far from being educational for the audience, could actually be understood as a way of visually presenting fake news. Presenting beautified images of what according to the director of WHO is considered to be our public enemy No. 1, should give us something to think about."

Dr. Celia Andreu-Sánchez, who also took part in this study as member of the Neuro-Com group of the Universitat Autònoma de Barcelona, explains that, "Our results lead us to consider the possibility that the viewers’ perception of the images representing SARS-CoV-2 could have influenced their behavior as well as their emotional states." She continues to say that this is why “we suggest that scientific communicators take heed of this study when communicating scientific content related to public health in the future, in which the behavior of the population is essential."