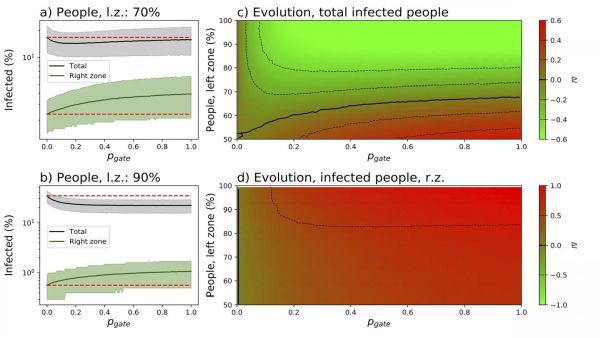 Evolution of infection in people as a function of asymmetry in population distribution shows that when the border from high density to low-density areas is closed, total overall disease spread doubles. Courtesy of Massimiliano Zanin

Pandemics are fueled, in part, by dense populations in large cities where networks of buildings, crowded sidewalks, and public transportation force people into tighter conditions. This contrasts with conditions in rural areas, where there is more space available per person.

According to common sense, being in less crowded areas during a pandemic is safer. But small town mayors want to keep people safe, too, and migration of people from cities to rural towns brings concerns. During the COVID-19 pandemic, closing national borders and borders between states and regions has been prevalent. But does it really help?

In a paper published in Chaos, two researchers decided to put this hypothesis to the test and discover if confinement and travels bans are really effective ways to limit the spread of a pandemic disease. Specifically, they focused on the movement of people from larger cities to smaller ones and tested the results of this one-way migration.

"Instead of taking mobility, or the lack of mobility, for granted, we decided to explore how an altered mobility would affect the spreading," author Massimiliano Zanin said. "The real answer lies in the sign of the result. People always assume that closing borders is good. We found that it is almost always bad."

The model used by the authors is simplified, without many of the details that affect migration patterns and disease spread. But their focus on changes in population density indicates travel bans might be less effective than migration of people to less dense areas. The result was reduced spread of disease.

Zanin and collaborator David Papo placed a hypothetical group of people in two locations and assumed their travel was in random movement patterns. They used SIR dynamics, which is common in epidemiological studies of disease movement. SIR stands for susceptible, infected, and recovered -- classifications used to label groups in a simulation and track disease spread according to their interactions.

They ran 10,000 iterations of the simulation to determine the resulting disease spread among people in two locations when migration is one way: from dense cities to less dense towns. They also studied the effect of "forced migration," which moves healthy people out of dense cities at the onset of a pandemic.

The results showed that while movement from big cities to small towns might be slightly less safe for the people in small towns, overall, for a global pandemic situation, this reduction in the density of highly populated areas is better for the majority of all people.

"Collaboration between different governments and administrations is an essential ingredient towards controlling a pandemic, and one should consider the possibility of small-scale sacrifices to reach a global benefit," Zanin said.

Be the first to comment on "In a Pandemic, Migration Away From Dense Cities More Effective Than Closing Borders"