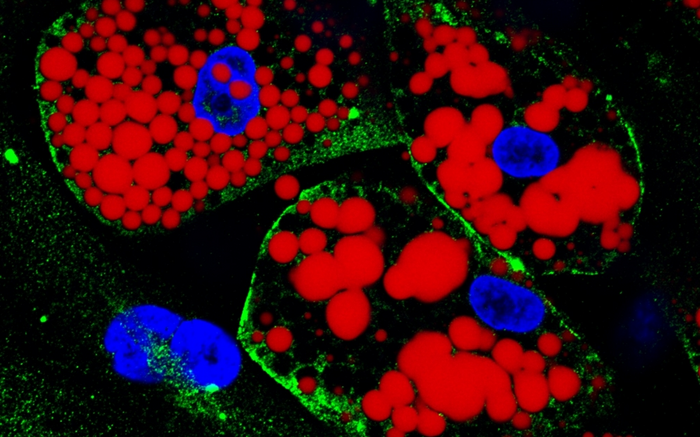 Cultured differentiated adipocytes: lipids are stained red; the protein ACE-2, which serves as the receptor for SARS-CoV-2, is green; cell nuclei are blue. Courtesy of Amanda Passos & Flávio Protasio Veras

Experiments conducted in Brazil by researchers at the State University of Campinas (UNICAMP) and the University of São Paulo (USP) showed that visceral fat – fat around the liver, intestines and other organs, considered a risk factor for cardiovascular disease, diabetes and high blood pressure – contributes more to severe COVID-19 than subcutaneous fat.

To reach this conclusion, Marcelo Mori, a professor at UNICAMP’s Institute of Biology and one of the leaders of the study, infected in the laboratory two types of adipocytes (fat cells): one obtained from human stem cells isolated from subcutaneous tissue and the other differentiated from stem cells taken from visceral fatty tissue.

“It was possible to observe that visceral adipocytes are more susceptible to infection by SARS-CoV-2. Viral load increased far more in this fat cell type than in subcutaneous adipocytes. We believe this was due mainly to higher levels of the protein ACE-2 [ to which the virus binds to invade cells] on the cell surface,” Mori told Agência FAPESP.

The researchers also found that when visceral adipocytes were infected, they produced a larger amount of pro-inflammatory cytokines, which warn the immune system of the existence of a threat to be combated.

An article on the study is published in Nature Communications. Several research groups at UNICAMP collaborated with the group at USP, alongside colleagues at the Brazilian Bioscience National Laboratory (LNBio-CNPEM), National Cancer Institute (INCA) and D’Or Research and Education Institute (IDOR). The principal investigators were Luiz O. Leiria (USP), Mariana Osako (USP) and Daniel Martins-de-Souza (UNICAMP).

Mori’s team at UNICAMP was the first in the world to show – in July 2020 – that SARS-CoV-2 can infect human fat cells and to suggest that adipose tissue serves as a reservoir for the virus (read more at: agencia.fapesp.br/33729).

“After that, other studies confirmed that adipocytes can indeed be infected, and when we analyzed samples from patients who died of COVID-19, we found the presence of the virus in adipose tissue to be relatively frequent, corresponding to about 50% of cases,” Mori said.

The group then decided to investigate whether there were differences between the way visceral and subcutaneous adipose cells responded to infection. As far as metabolic diseases are concerned, the evidence in the scientific literature shows visceral fat to be the main villain, while subcutaneous fat tends to be neutral or even beneficial.

“We wanted to see if there was a similar association in the context of COVID-19,” Mori said. “And in fact our model suggests that the more visceral adipose tissue there is in obese individuals, the more the virus can replicate, and this amplifies the inflammatory process.”

In subcutaneous adipocytes, on the other hand, the group observed a decrease in lipolysis, the breakdown of fats and other lipids by hydrolysis to release fatty acids, which can be used as a source of energy during physical activity or fasting periods.

“Our hypothesis is that this represents an antiviral cellular response,” Mori said. “There are studies showing that inhibition of lipolysis lowers the replicative capacity of SARS-CoV-2, which can be explained by the fact that the virus needs lipids to produce its envelope, as well as energy from cells to make copies of its genetic material.” Reduced lipolysis in subcutaneous adipose tissue, therefore, could be positive for the patient and bad news for the virus.

Visceral adipocytes were exposed to different strains of SARS-CoV-2: the ancestral lineage originally from Wuhan, China, and isolated from one of the first Brazilians diagnosed with COVID-19; and the gamma variant (P.1.), which emerged in late 2020 in Manaus, the capital of Amazonas state in Brazil. The difference in susceptibility compared to subcutaneous adipocytes was observed only in response to the ancestral virus.

“We concluded that the Manaus variant is less effective at infecting visceral fat cells than the ancestral strain,” Mori said. “A proteomic analysis [of all the proteins produced by the cells] showed that the Wuhan strain led to a reduction in several proteins associated with the cellular response to interferon [ an immune system mechanism to combat viruses], whereas the gamma variant led to an increase. In other words, the Manaus strain made adipocytes produce more proteins that promote an antiviral response.”

Recent research points to a downtrend in the number of severe cases of COVID-19 due to novel variants among people with obesity. “But this could be influenced by other factors, such as vaccination or prior infection. Or these individuals may have been taking extra care because they knew they belonged to a high-risk group,” Mori explained.

To try to deepen their understanding of all these processes, the group plans further experiments involving adipocytes cultured with the delta and omicron variants.

Another plan for future research is to investigate possible medium- to long-term metabolic impacts of infection by SARS-CoV-2. “We want to find out whether infection changes the risk of developing diabetes or cardiovascular disease, for example,” Mori said. “One way of doing so could be to analyze samples from patients who had COVID-19 and were later submitted to bariatric surgery, in order to see if morphological and functional alterations occurred in visceral adipose tissue as a result of the infection.”