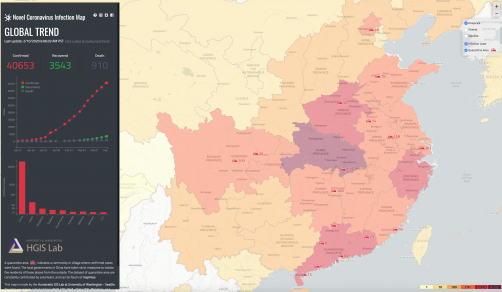 As scientists pin down the origin, governments enact prevention measures and labs look for a cure, news about the outbreak of the novel coronavirus often comes down to two questions: where and how many people are infected?

A new interactive map from University of Washington geographer Bo Zhao aims to answer those questions in real time.

Zhao produced this interactive map of the coronavirus, which updates every few hours with data from the Centers for Disease Control and Prevention, the World Health Organization, the People’s Republic of China, and other government agencies, including those in Hong Kong, Macau and Taiwan. By zooming in on various countries – such as China – users can see the numbers of cases, recoveries and deaths, as well as trends over time.

“Mapping is a powerful tool to tell social, cultural and political phenomena,” said Zhao, an assistant professor of geography who specializes in the social implications of maps and using innovative methods in mapping. “As a geographer, and in what people call the ‘post-truth era,’ it’s important to weigh in with data sources to show people how things are happening.”

The outbreak of the coronavirus, which is believed to have originated in Wuhan, China in December, has been declared a public health emergency by the WHO.

Zhao recently produced an online atlas to illustrate the global refugee experience. The coronavirus, he said, is another societal issue that people can gain perspective on by seeing it on a map.

While the Chinese government has been criticized for its response to the crisis, and concerns have arisen about its transparency, Zhao said China’s National Health Commission data is the most accurate available for the country.

But the outbreak is not just affecting China or the city of Wuhan, he added. It is a global issue, and that’s the perspective users can gain from the map. The numbers on display are important, too, he said, because there are more recoveries than deaths.

“That can give people encouragement,” he said.

As more detailed data become available, Zhao plans to add county-level totals from China, and state and provincial totals from the United States and Canada, respectively.