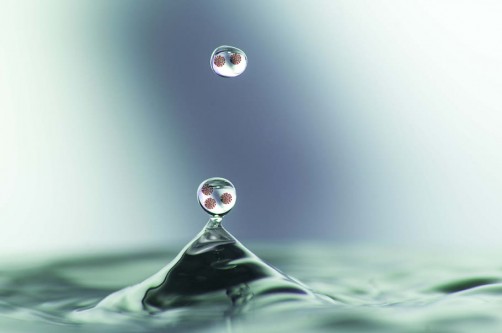 Laser and biology experts at Lawrence Berkeley National Laboratory (Berkeley Lab) are working together to develop a platform and experiments to study the structure and components of viruses like the one causing COVID-19, and to learn how viruses interact with their surrounding environment. The experiments could provide new insight on how to reduce the infectiousness of viruses.

The new platform will build upon Berkeley Lab’s world-leading R&D efforts in laser-based plasma acceleration, in which a laser pulse creates an exotic, superhot state of matter known as a plasma that in turn rapidly accelerates charged particles – electrons and ions. Berkeley Lab scientists last year bested their own world record in accelerating electrons to high energies in a 20-centimeter span.

In the new setup, the accelerated electrons will generate X-rays that will act as microscopic strobes to capture images of virus-laden droplets that are dripped into the path of the X-rays. At the same time, synchronized within quadrillionths of a second, a second laser beam will strike the droplets to capture another layer of data about the virus particles and their makeup, and about other matter in the droplets.

“The idea is to learn about the virus and what’s around it,” said Thomas Schenkel, acting director of the Accelerator Technology and Applied Physics Division at Berkeley Lab who is part of the team planning the experiments. “How does it behave inside a droplet and what binds to it? How long is the virus viable in a droplet?”

The goal is to study the virus in certain biofluids, like saliva, and how it reacts to compounds mixed into the droplets. Biosciences experts at Berkeley Lab will prepare the samples and participate in the data analyses.

In this pilot study, researchers will use surrogate viruses that have similar properties to the SARS-CoV-2 virus that causes COVID-19 but are safe for laboratory workers to work with.

“These droplets aren’t just mini sacks of water, but a complex mixture of proteins and salt that affects viral stability,” said Antoine Snijders, a staff scientist and chair of the department of BioEngineering and BioMedical Sciences in Berkeley Lab’s Biological Systems and Engineering Division.

The droplets are intended to simulate the environment of the body’s respiratory system.

“What’s exciting about this study is that it will lead to a better understanding of the chemical characteristics of respiratory droplets and the virus contained within them,” Snijders added. “Once we understand the chemical characteristics, and the mechanism of viral inactivation within these droplets, we may be able to reduce efficiency of airborne disease transmission.”

The effort is supported by Berkeley Lab’s Laboratory Directed Research and Development (LDRD) program, through which the Lab directs funding to specific areas of research. Berkeley Lab, like the U.S. Department of Energy’s other national laboratories, is making COVID-19 research a priority.

The experiments will combine two techniques: X-ray imaging for structural information, and mass spectrometry to learn details about the chemical makeup of samples down to the level of individual proteins and molecules.

The secondary laser in the experiments will provide the spectroscopic information by charging up and breaking apart matter in the samples. Those bits and parts, such as individual protein components of a virus, can then be chemically measured and analyzed by a detector.

Conceivably, the setup could be used or modeled as a testing platform for coronavirus disease. Schenkel noted that with existing capabilities at the Berkeley Lab Laser Accelerator (BELLA) Center, it is possible to image and measure about five droplets every second. A proposed BELLA Center upgrade, called kBELLA, could drive that rate up to 1,000 droplets per second.

Eric Esarey, BELLA Center director, said an ultimate aim in developing laser plasma acceleration techniques is to reduce the size and cost of particle accelerators that could serve in a range of capacities for the medical, industrial, and research communities.

“In principle, this could be a compact, powerful, and low-cost device that could be put in lots of laboratories and lots of hospitals,” he said.

New types of X-ray sources based on laser-plasma accelerators are in active research in the BELLA Center, and they continue to be improved. These improvements are needed to provide high-resolution imaging of very small viruses in their environment.

Schenkel added that researchers can proceed with modifying a Berkeley Lab-developed computer code that models the laser and electron beams to optimize them for the new research.

“We are excited to use our tools to advance our understanding of COVID and contribute to future pandemic prevention,” Schenkel said.

“There are many analytical techniques that have originated from research with atom-smashers and particle beams years ago and that have since become workhorse tools in biomedical science.” He added, “When we discussed this new idea, there was a strong sense of urgency and excitement. This project is one example where we can immediately adapt our capabilities in response to the current crisis and advance our arsenal for the prevention of future pandemics. We want to show that this works so that we can establish it as a new capability for the community.”