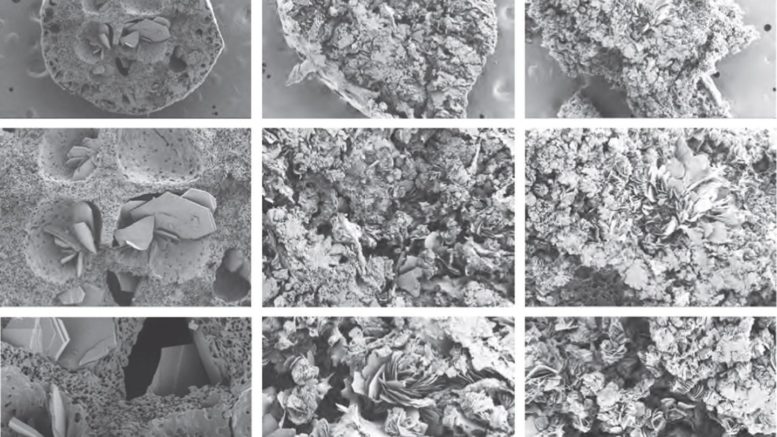 These are SEM cross-section images of the implant after drug release for 30 days. Courtesy of UNC School of Medicine

A new study published in Nature Communications shows a promising alternative for those who have to take a daily pill regimen. Targeting HIV treatment and prevention, researchers across multiple departments at the University of North Carolina at Chapel Hill collaborated on a seven-year study in animals to make a better injectable drug implant that can combine multiple drugs and is ultra-long-acting, while also addressing many of the challenges faced with current HIV treatment and prevention methods.

"There is no FDA-approved or marketed technology for long-acting prevention of HIV, and we are the first to use this delivery method with multiple antiretroviral drugs," said Rahima Benhabbour, PhD, MSc, first author of the study and assistant professor in the UNC_NCSU Joint Department of Biomedical Engineering. "To have an HIV prevention treatment that consists of an injection once or twice a year would make an incredible impact for patients." She added, "This technology is not only promising for HIV, but for any kind of condition that requires a daily intake of medication. We're talking about a safe, removable, long-lasting injection that takes away the burden of adhering to a daily medication regimen."

Antiretroviral drugs are used in both prevention and treatment of HIV, and multiple types are used in combination to counteract resistance to any one antiretroviral drug. These drugs need to be taken consistently every day. There are many obstacles that stand in the way of adherence to these medication regimens. Benhabbour says this especially applies to otherwise healthy people trying to prevent infection.

"In sub-Saharan Africa where prevalence of HIV is highest, accessibility to these medications can be difficult, and there is much stigma associated with the virus," Benhabbour said. "It is a very big deal for someone who doesn't have HIV to go out of their way to not only access the drugs, but then associate themselves with HIV by taking a pill every day."

There's also the factor of human error. Anyone who strives to take a daily multivitamin can understand that some days the pill gets skipped, or gets taken at a different time of day. But such small deviations can make antiretroviral drugs less effective.

"Because one of the biggest difficulties associated with HIV prevention is lack of adherence to drug treatment, we wanted to create a drug delivery system that essentially solved this problem," said senior author J. Victor Garcia, PhD, professor of medicine at UNC School of Medicine, director of the International Center for the Advancement of Translational Science and member of the UNC Center for AIDS Research.

The injectable implant is comprised of three elements - an organic solvent, a polymer, and the drug or drugs that need to be delivered. The formulation results in a honey-like liquid that turns into a solid when injected under the skin. This phase inversion happens when the solvent diffuses into the body leaving behind the polymer and medication(s) - the combination of which determines over what time period the medication(s) will be released into the blood system.

In this study six antiretroviral drugs were tested, and all kept their physical and chemical properties within the formulation and upon release. All six were also released from the implant at effective levels for a sustained amount of time ranging from one month to a year.

The injectable drug implant created by UNC's research team is the first to address several drawbacks to the current method of long-acting drug delivery for HIV - namely the ability to remove it and quickly eliminate the presence of residual drug(s) in the system.

"If a patient needs to withdraw from the treatment because they've had a bad reaction to the drug(s), or maybe a woman has become pregnant, our implant can be easily surgically removed," said Martina Kovarova, PhD, contributing author to the study and associate professor of medicine at UNC SOM.

This is the first ever injectable implant for HIV that can be removed as early as one week, or as late as months after the injection, and have drug levels virtually eliminated from the system within one week. If the implant does not need to be removed, it biodegrades into lactic and glycolic acids, which are already found in the body and are easily absorbed.

Researchers plan to continue developing and improving this multi-drug delivery system, observing its effects in relevant in vivo models and eventually humans.

This study was a collaboration amongst the UNC_NCSU Joint Department of Biomedical Engineering, UNC School of Medicine, UNC Eshelman School of Pharmacy, UNC Center for Aids Research, and Merck Research Laboratories. It was funded by grants from the National Institute of Allergy and Infectious Diseases and the International Center for Advancing Translational Science.