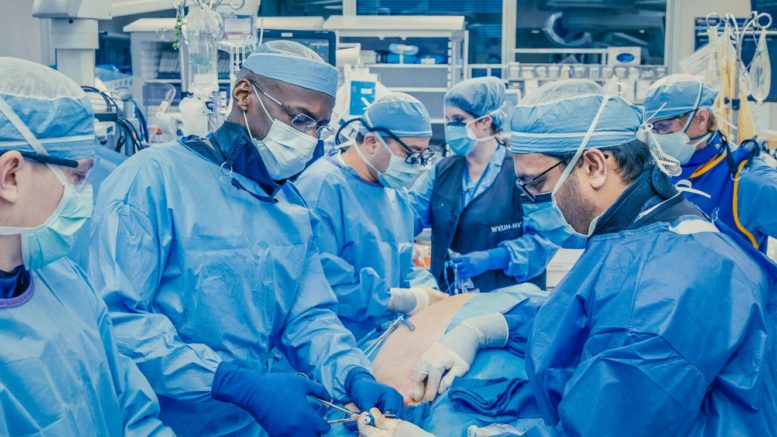 New research out of WVU provides insight into which COVID-19 patients tend to fare better on ECMO than others. Here, members of the research team--Jeremiah Hayanga (second from left) and Vinay Badhwar (third from left)--work with their colleagues at the WVU Heart and Vascular Institute to treat a patient using ECMO. Courtesy of West Virginia University

When COVID-19 patients are critically ill, the biggest threat to their lives is lung dysfunction. If their lungs don't work, their blood can't circulate enough oxygen to the brain, the liver and other organs.

A new cohort study out of West Virginia University suggests one piece of life-support equipment--an extracorporeal membrane oxygenation machine--can be especially useful for treating some of these COVID-19 patients. But ECMO may be less helpful for COVID-19 patients who are older, who have preexisting conditions and whose heart function has deteriorated.

The findings appeared in ASAIO Journal.

An ECMO machine works by pumping someone's blood outside of their body, oxygenating it and returning it to the body. In this way, the ECMO machine gives the lungs--and sometimes the heart--time to rest and heal.

It can keep some patients alive when ventilators alone aren't enough.

The research team analyzed 32 COVID-19 patients with severely compromised lung function who were supported with ECMO.

At the time of the researchers' analysis, 22 of the patients--or 68 percent--had survived. Of those 22 patients, 17 were still on ECMO. Only five had been removed from ECMO and lived.

Those five patients had something interesting in common: they all received a kind of ECMO that supports the lungs but not the heart. None of the patients who had lung and heart ECMO support had been removed from ECMO successfully yet.

This disparity probably exists because patients who got ECMO support for both their heart and lungs were sicker to begin with, and their heart function was more compromised.

Insights like these help clinicians to "counsel patients and family members about the individualized risks and benefits of ECMO," said Jeremiah Hayanga, WVU's director of ECMO and a member of the research team.

The team also included Vinay Badhwar, the executive chair of the WVU Heart and Vascular Institute, and Jeffrey Jacobs, a consultant to HVI and a non-faculty collaborator with the School of Medicine's Department of Cardiovascular and Thoracic Surgery.

"Patients whose disease is restricted to the lung have been shown to have better survival, and this is indeed true for all indications of ECMO," Hayanga said. "When both heart and lung function are impaired, however, there is a reduction in survival, and selection in these patients warrants even greater scrutiny."

The researchers also discovered that patients who were under 65 and had fewer preexisting conditions--such as obesity, diabetes and heart disease--also fared better on ECMO than their older counterparts who had more medical issues.

"Our previously published research on national ECMO use has highlighted that patients over age 70 have drastically reduced survival," Hayanga said. "This may likely be a function of their coexisting illnesses and a lack of reserve. Indeed, the Extracorporeal Life Support Organization that provides oversight for ECMO programs around the world considers age 65 as a relative contraindication. As such, patients with advanced age require careful evaluation to ensure the benefit outweighs the risk."

Besides being relatively young, what else might improve COVID-19 patients' outcomes from ECMO? Steroids.

Of the five patients who were successfully removed from ECMO, four had been receiving steroids through an IV. This discovery contradicts earlier findings out of China, which suggested steroids might do more harm than good.

But just because the data suggest younger, healthier COVID-19 patients--especially those prescribed steroids--may be more likely to respond well to ECMO, that doesn't mean other patients should never receive ECMO support.

"At the WVU HVI, we pride ourselves in offering individualized, patient-centric care to all patients," Hayanga said. "Our multidisciplinary team takes a very individualized approach to all patients who may benefit from ECMO support, and we fully assess the potential benefits and risks of supporting any patient with this advanced method of life support."

Be the first to comment on "Machine That Oxygenates Blood May Help Critically Ill COVID-19 Patients, Study Finds"