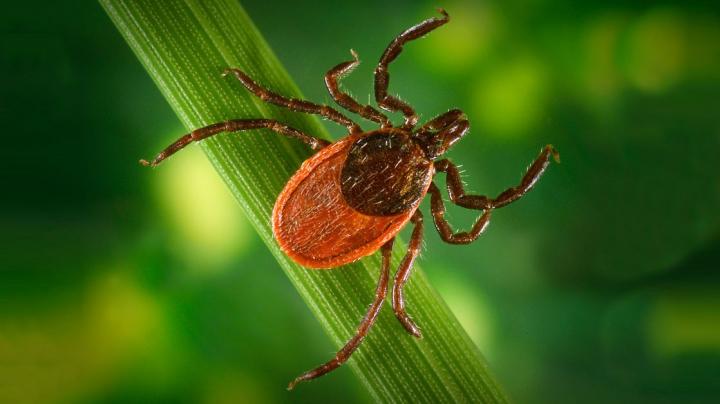 A data model developed by Columbia researchers showed about 162 U.S. counties may have Lyme disease cases not yet been reported to the CDC. Courtesy of Centers for Disease Control and Prevention

The Centers for Disease Control and Prevention (CDC) receives reports of about 30,000 cases of Lyme disease each year. The real number, according to the agency, is closer to 300,000.

A new report, published on March 3, 2020, in Journal of the American Medical Association, describes a data model developed by researchers from Columbia University and RTI International, a nonprofit research institute, that helps identify areas of the United States where Lyme disease cases may go unreported.

"We believe our analysis can help predict the trajectory of where Lyme disease will spread," said Maria Pilar Fernandez, a post-doctoral researcher at Columbia and lead author of the study. "Identifying high-risk areas can lead to surveillance in counties and areas where infections are likely to emerge. It also allows authorities to alert physicians and the public, which can lead to early treatment, when it is most effective."

To develop their model, the researchers analyzed publicly available data, tracking the geographic spread of Lyme disease over nearly two decades. They studied an estimated 500,000 cases of the illness reported to CDC from different counties across the United States between 2000 and 2017.

Lyme disease is difficult to diagnose, and accurate case assessment depends on many variables, the researchers said, from provider awareness and testing methods to reporting practices, state budgets and personnel.

"We were able to show that about 162 U.S. counties may already have Lyme disease, but they have not yet been reported to the CDC," said Maria Diuk-Wasser, associate professor in the Department of Ecology, Evolution and Environmental Biology at Columbia and a co-author on the study.

The CDC collects Lyme disease data from state and local health departments, which base the number of cases on notifications from clinicians, hospitals and laboratories.

Lyme disease is difficult to diagnose, and accurate case assessment depends on many variables, the researchers said, from provider awareness and testing methods to reporting practices, state budgets and personnel.

Although Lyme disease has been diagnosed in almost every state, most cases reported to the CDC are in the Northeast and upper Midwest.

If diagnosed early--a rash commonly appears around the site of the tick bite--the condition can be effectively treated with antibiotics. Longer term infections can produce more serious symptoms, including joint stiffness, brain inflammation and nerve pain.

Models have been created in the past to identify high-risk areas in a few states or regions in the United States, but the new one expands the geographic scope to all areas in the U.S. where the disease is most likely to occur.

"In the future, the model can be expanded," Fernandez said. "We hope to continue to keep track of the spread and inform authorities about areas where Lyme disease is likely to emerge."