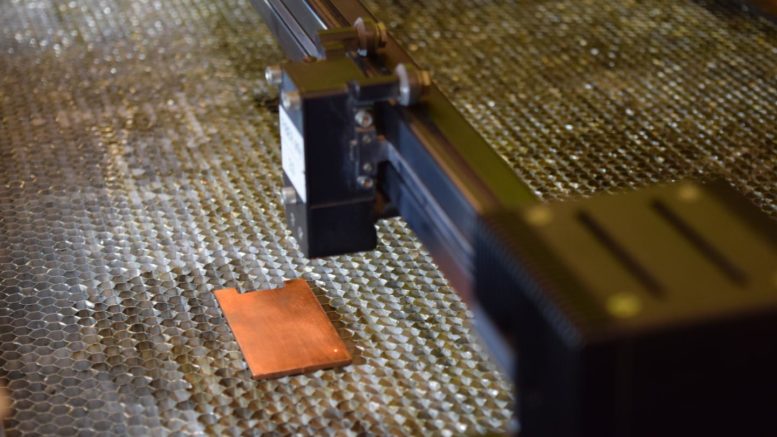 A laser prepares to texture the surface of copper, enhancing its antimicrobial properties. Courtesy of Purdue University photo/Kayla Wiles

Bacterial pathogens can live on surfaces for days. What if frequently touched surfaces such as doorknobs could instantly kill them off?

Purdue University engineers have created a laser treatment method that could potentially turn any metal surface into a rapid bacteria killer -- just by giving the metal's surface a different texture.

In a study published in the journal Advanced Materials Interfaces, the researchers demonstrated that this technique allows the surface of copper to immediately kill off superbugs such as MRSA.

"Copper has been used as an antimicrobial material for centuries. But it typically takes hours for native copper surfaces to kill off bacteria," said Rahim Rahimi, a Purdue assistant professor of materials engineering.

"We developed a one-step laser-texturing technique that effectively enhances the bacteria-killing properties of copper's surface."

The technique is not yet tailored to killing viruses such as the one responsible for the COVID-19 pandemic, which are much smaller than bacteria.

Since publishing this work, however, Rahimi's team has begun testing this technology on the surfaces of other metals and polymers that are used to reduce risks of bacterial growth and biofilm formation on devices such as orthopedic implants or wearable patches for chronic wounds.

Giving implants an antimicrobial surface would prevent the spread of infection and antibiotic resistance, Rahimi said, because there wouldn't be a need for antibiotics to kill off bacteria from an implant's surface.

The technique might apply to metallic alloys that also are known to have antimicrobial properties.

Metals such as copper normally have a really smooth surface, which makes it difficult for the metal to kill bacteria by contact.

The technique developed by Rahimi's team uses a laser to create nanoscale patterns on the metal's surface. The patterns produce a rugged texture that increases surface area, allowing more opportunity for bacteria to hit the surface and rupture on the spot. A YouTube video is available at https://youtu.be/3vFFdNXsoN0.

Researchers in the past have used various nanomaterial coatings to enhance the antimicrobial properties of metal surfaces, but these coatings are prone to leach off and can be toxic to the environment.

"We've created a robust process that selectively generates micron and nanoscale patterns directly onto the targeted surface without altering the bulk of the copper material," said Rahimi, whose lab develops innovative materials and biomedical devices to address health care challenges.

The laser-texturing has a dual effect: The technique not only improves direct contact, but also makes a surface more hydrophilic. For orthopedic implants, such a surface allows bone cells to more strongly attach, improving how well the implant integrates with bone. Rahimi's team observed this effect with fibroblast cells.

Due to the simplicity and scalability of the technique, the researchers believe that it could easily be translated into existing medical device manufacturing processes.

The work was funded in part by Purdue's School of Materials Engineering and the Wabash Heartland Innovation Network. This research was performed at the Birck Nanotechnology Center in Purdue's Discovery Park.