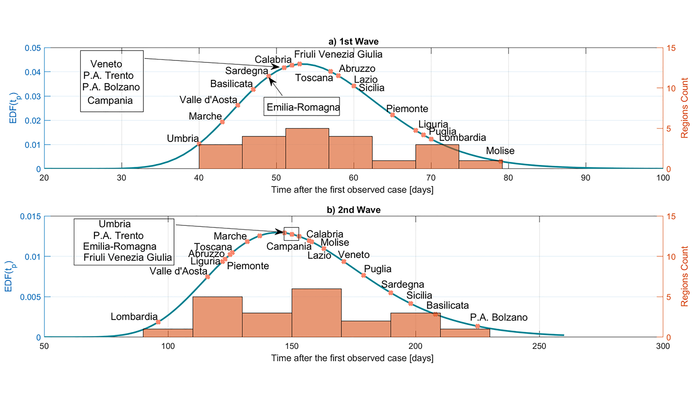 Accurate forecasting of epidemic scenarios is critical to implementing effective public health intervention policies. While much progress has been made in predicting the general magnitude and timing of epidemics, there's still room for improvement in forecasting peak times, as unfortunately evidenced with H1N1 and COVID-19, when peak times occurred later than predicted.

In a paper published in Chaos, researchers from France and Italy use dynamical stochastic modeling techniques to reveal that infection and recovery rate fluctuations play a critical role in determining peak times for epidemics.

"Some averaged quantities, like infection and recovery rates, are highly sensitive to parameter fluctuations, which means that the latter must be understood, even when average behavior is the only focus of interest," said co-author Maxence Arutkin. "Our work shows that epidemic peak timing depends on these fluctuations, and neglecting them in epidemiological models can lead to inaccurate epidemic scenarios and unsuitable mitigation policies, not to mention enable viruses to evolve into new variants."

Using a susceptible-infected-recovered epidemic model that incorporates daily fluctuations on control parameters, the study applies probability theory calculations to infection counts at the beginning of an epidemic wave and at peak times for populations in Italy. While previous works using standard epidemiological models have suggested there is a delay between the epidemic peak date and its prediction (without fluctuations), the researchers suggest the epidemic peak time depends not only on the mean value of the infection and recovery rates but also on their fluctuations.

To predict epidemic trajectory, an important parameter is the basic reproduction number, R0, which describes the average number of infections transmitted from an individual. Infection and recovery rate fluctuations lead to lognormal probability distribution of the number of infected people, similar in its analytical form to price distributions for financial assets.

"In the short term, even when average infections transmitted from a single individual are less than one, we can observe epidemic resurgence due to parameter fluctuations," said Arutkin. "Also, a dispersion of the epidemic peak time can be quantified showing that, without taking these fluctuations into account, the peak time estimates are biased."

The study reveals that improved prediction depends on both R0 levels and fluctuations in infection and recovery rates and may provide policymakers with a tool to assess the consequences of parameter fluctuations based on different R0 levels.