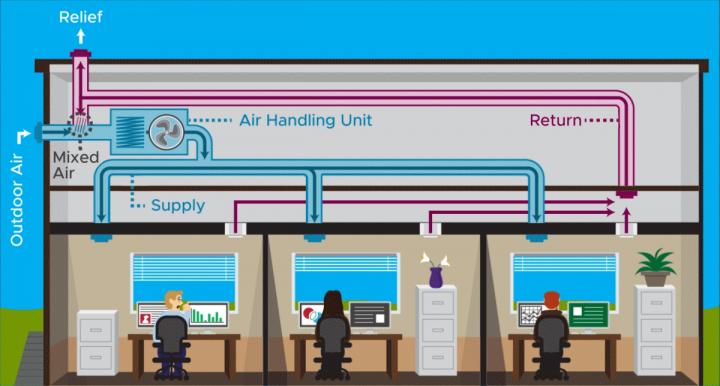 When the infected person in the office to the left coughs, respiratory droplets containing viral particles exit via the office's vent in the ceiling. Some droplets exit the building, while some are sent back into the building and into multiple rooms through the air-handling unit. A PNNL team found that a high ventilation rate can increase viral particle levels downstream of a source room. Courtesy of Cortland Johnson/Sara Levine, Pacific Northwest National Laboratory

Vigorous and rapid air exchanges might not always be a good thing when it comes to addressing levels of coronavirus particles in a multiroom building, according to a new modeling study.

The study suggests that, in a multiroom building, rapid air exchanges can spread the virus rapidly from the source room into other rooms at high concentrations. Particle levels spike in adjacent rooms within 30 minutes and can remain elevated for up to approximately 90 minutes.

The findings, published online in final form April 15 in the journal Building and Environment, come from a team of researchers at the U.S. Department of Energy's Pacific Northwest National Laboratory. The team includes building and HVAC experts as well as experts in aerosol particles and viral materials.

"Most studies have looked at particle levels in just one room, and for a one-room building, increased ventilation is always useful to reducing their concentration," said Leonard Pease, lead author of the study. "But for a building with more than one room, air exchanges can pose a risk in the adjacent rooms by elevating virus concentrations more quickly than would otherwise occur.

"To understand what's happening, consider how secondhand smoke is distributed throughout a building. Near the source, air exchange reduces the smoke near the person but can distribute the smoke at lower levels into nearby rooms," Pease added. "The risk is not zero, for any respiratory disease."

The team modeled the spread of particles similar to SARS-CoV-2, the virus that causes COVID-19, via air-handling systems. Scientists modeled what happens after a person has a five-minute coughing bout in one room of a three-room small office building, running simulations with particles of five microns.

Researchers looked at the effects of three factors: different levels of filtration, different rates of outdoor air incorporation into the building air supply, and different rates of ventilation or air changes per hour. For downstream rooms, they found an expected clear benefit from increasing outdoor air and improving filtering, but the effect of increased ventilation rate was less obvious.

"More outside air is clearly a good thing for transmission risk, as long as the air is free of virus," said Pease.

The second factor studied--strong filtration--also was very effective at reducing transmission of the coronavirus.

The team studied the effects of three levels of filtration: MERV-8, MERV-11, and MERV-13, where MERV stands for minimum efficiency reporting value, a common measure of filtration. A higher number translates to a stronger filter.

Filtration decreased the odds of infection in the connected rooms markedly. A MERV-8 filter decreased the peak level of viral particles in connected rooms to just 20 percent what it was without filtration. A MERV-13 filter knocked down the peak concentration of viral particles in a connected room by 93 percent, to less than one-tenth of what it was with a MERV-8 filter. The researchers note that the stronger filters have become more common since the pandemic began.

The most surprising finding of the study involved ventilation--the effect of what researchers call air changes per hour. What's good for the source room--cutting transmission risk within the room by 75 percent--is not so good for connected rooms. The team found that a rapid rate of air exchange, 12 air changes per hour, can cause a spike in viral particle levels within minutes in connected rooms. This increases the risk of infection in those rooms for a few minutes to more than 10 times what it was at lower air-exchange rates. The higher transmission risk in connected rooms remains for about 20 minutes.

"There are many factors to consider, and the risk calculation is different for each case," said Pease. "How many people are in the building and where are they located? How large is the building? How many rooms? There is not a great deal of data at this point on how viral particles move about in multiroom buildings.

"These numbers are very specific to this model--this particular type of model, the amount of viral particles being shed by a person. Every building is different, and more research needs to be done," Pease added.

Co-author Timothy Salsbury, a buildings control expert, notes that many of the trade-offs can be quantified and weighted depending on circumstances.

"There are many factors to balance--filtration level, outdoor air levels, air exchange--to minimize transmission risk. Building managers certainly have their work cut out for them," he added.

The team is already conducting a series of experimental studies along the same lines as the modeling study. Like the newly published study, the additional analyses look at the effects of filtration, outdoor air incorporation and air changes.

These ongoing studies involve real particles made of mucus (not incorporating the actual SARS-CoV-2 virus) and consider differences among particles expelled from various parts of the respiratory tract, such as the oral cavity, the larynx, and the lungs. Investigators deploy an aerosolizing machine that disperses the viral-like particles much as they'd be dispersed by a cough, as well as fluorescent tracking technology to monitor where they go. Other factors include varying particle sizes, how long viral particles are likely to be infectious, and what happens when they drop and decay.