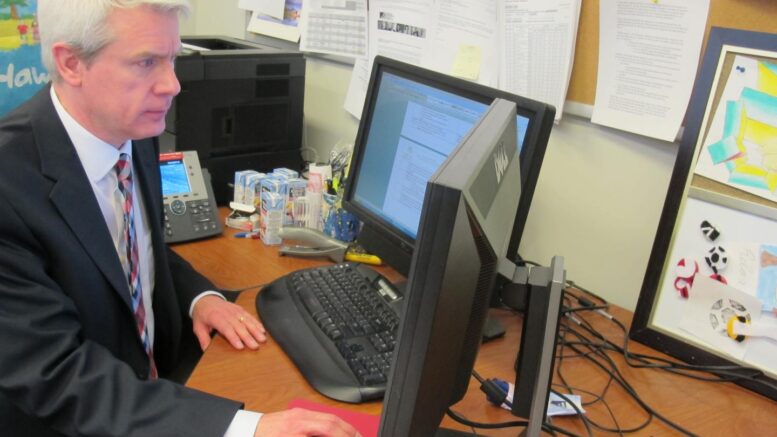 Finlay McAlister led an analysis that indicates people in neighborhoods and workplaces with a higher risk of COVID-19 infections should be prioritized for vaccination as Canada faces a third wave of the pandemic. Courtesy of Faculty of Medicine & Dentistry, University of Alberta

It's time for a more nuanced approach to vaccine prioritization, as more contagious COVID-19 variants become prevalent and a third wave of infections threatens to overwhelm hospitals in some provinces, according to an analysis published today in the Canadian Medical Association Journal.

"It's time to move the debate away from age and medical risk factors," said lead author Finlay McAlister, professor in the University of Alberta's Faculty of Medicine & Dentistry. "The third wave is showing us that the most vulnerable are people in economically marginalized neighborhoods, Amazon factories and Superstores, where there are a lot of people in close proximity, a group that wasn't prioritized for vaccination before."

McAlister and three other authors, including U of A infectious disease professor Lynora Saxinger, who co-chairs the scientific advisory group for Alberta Health Service's COVID-19 Emergency Coordination Centre, analyzed data for 61,000 Canadian patients using data from the Canadian Community Health Survey. They identified how many have conditions which are recognized as risk factors for severe COVID-19 disease, including high blood pressure, diabetes and smoking.

"At least 75 percent have at least one risk factor and one third have two or more," McAlister said. "When 75 percent of people are eligible, that's not really prioritization."

It was appropriate to give seniors living in communal settings and the very elderly shots first, as they were clearly the most likely to face severe disease and death at the time, McAlister said, but now the focus should be more targeted to neighborhoods and workplaces facing a higher risk of infection. He applauded the Alberta government's recent announcement that it will open vaccine clinics at the Cargill meat packing plant in High River, as an example of the new direction that should be taken.

McAlister also supports the recommendation from the National Advisory Committee on Immunization to give first doses to as many Canadians as possible, even if it means waiting up to three months to administer second doses while supplies are limited.

"The science is evolving rapidly and there is accumulating evidence now, showing that after the first shot we are getting about 80 per cent efficacy, so it looks like delaying that second dose is a good approach," McAlister said. "Of course, how long that first-dose protection will last, we will only know in retrospect."

He noted that some groups should be given special consideration to get their second dose more quickly, for example evidence shows cancer and transplant patients do not develop the same level of immunity from the first dose as others.

"They seem to get only partial immunity, which means they are at a greater risk for infection, giving the virus another chance to develop a variant and get passed on," McAlister explained. "We want as many people as possible to develop immunity as quickly as possible so there's less chance for new variants to develop."

Be the first to comment on "More Nuanced Approach to Deciding Who Receives COVID-19 Vaccine is Needed in Face of Third Wave, Expert Says"