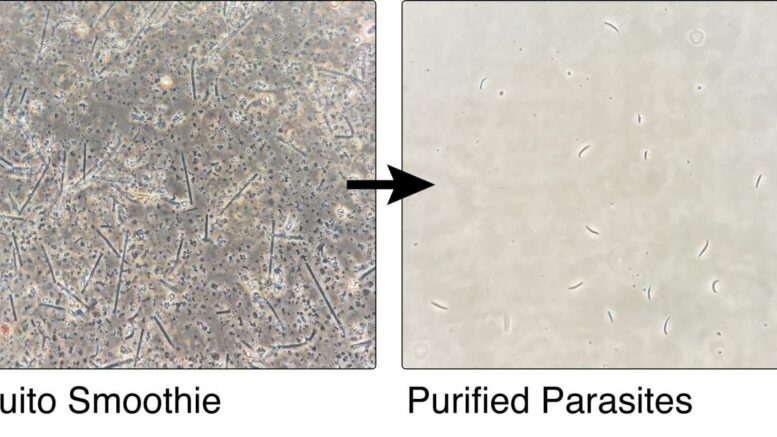 The mosquito 'smoothie' and the purified parasites after the team's process. Courtesy of Joshua Blight/Imperial College London

The new method, developed by a team of researchers led by Imperial College London, enables more parasites to be isolated rapidly with fewer contaminants, which could simultaneously increase both the scalability and efficacy of malaria vaccines.

Existing malaria vaccines that use whole parasites provide moderate protection against the disease. In these vaccines, the parasites are 'attenuated' -- just like some flu vaccines and the MMR vaccine -- so they infect people and raise a strong immune response that protects against malaria, but don't cause disease themselves. However, these vaccines require several doses, with each dose requiring potentially tens of thousands of parasites at an early stage of their development, known as sporozoites. Sporozoites are normally found in the salivary glands of mosquitoes, and in a natural infection are passed to humans when the mosquito bites. They then travel to the human liver, where they prepare to cause infection in the body.

Extracting sporozoites for use in a live vaccine currently requires manual dissection of the mosquito salivary glands -- miniscule structures behind the mosquito head -- by a skilled technician, which is a time-consuming and costly process.

The new method, described today in Life Science Alliance, vastly speeds up this process by effectively creating a 'mosquito smoothie' and then filtering the resulting liquid by size, density and electrical charge, leaving a pure sporozoite product suitable for vaccination. Importantly, no dissection is required.

Lead researcher Jake Baum, from the Department of Life Sciences at Imperial, said, "Creating whole-parasites vaccines in large enough volumes and in a timely and cost-effective way has been a major roadblock for advancing malaria vaccinology, unless you can employ an army of skilled mosquito dissectors. Our new method presents a way to radically cheapen, speed up and improve vaccine production."

But it's not just about speed and cost. Traditional dissection methods struggle to remove all contaminants, such as proteins from the salivary glands, which are often extracted with sporozoites. The extra debris is likely to affect the infectivity of the sporozoites once they are inside the body, and could even affect how the immune system responds, impacting the efficacy of any whole parasite vaccine.

The new method also tackles this problem, resulting in pure uncontaminated sporozoite samples. The team discovered that, as well as being purer, sporozoites produced were surprisingly more infectious, hinting that vaccines produced using their method may require a much lower dose of sporozoites.

First author of the study Dr. Joshua Blight, from the Department of Life Sciences at Imperial, said, "With this new approach we not only improve the scalability of vaccine production, but our isolated sporozoites may actually prove to be more potent as a vaccine, giving us additional bang per mosquito buck."

The team developed and tested their method with both human and rodent malaria parasites. They then tested the rodent version as a vaccine in mice, and found that when exposed to an infected mosquito bite, vaccinated mice showed 60-70 per cent protection when immunizations were given into muscle. When the same sporozoites were given directly into the blood stream (intravenously) protection was 100 per cent, known as 'sterile' protection.

The researchers are now developing the method further in readiness for mass manufacture of sporozoites under good manufacturing practice (GMP) conditions in order to produce a vaccine ready for human challenge trials. The plan is that participants would be given vaccine-grade sporozoites produced using this method and then purposefully bitten by an infected mosquito.

Looking beyond vaccines the researchers also say their method should help accelerate studies of sporozoite biology in general, which could in turn lead to fresh insights into the liver stage of malaria and new drug and vaccine regimes.

The research was funded by the Wellcome Trust and the Bill & Melinda Gates Foundation.