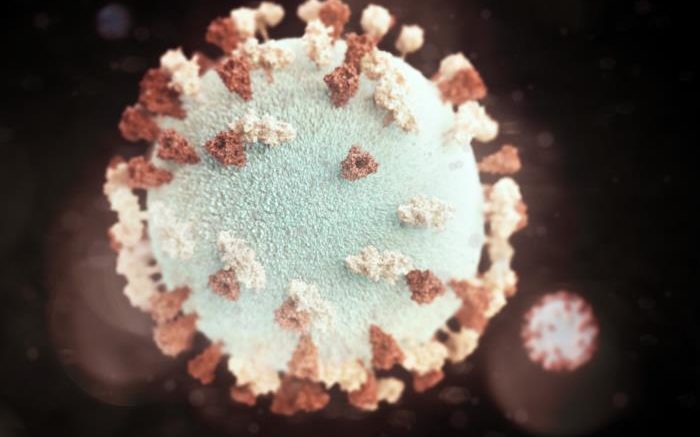 This illustration provides a 3D graphical representation of a spherical-shaped, mumps virus particle that is studded with glycoprotein tubercles. Courtesy of CDC/Allison M. Maiuri, MPH, CHES

Immunity against mumps virus appears insufficient in a fraction of college-aged people who were vaccinated in childhood, research from Emory Vaccine Center and the Centers for Disease Control and Prevention indicates. The findings highlight the need to better understand the immune response to mumps and mumps vaccines.

The results of the study are scheduled for publication in PNAS.

In the last 15 years, several mumps outbreaks have occurred among college students, sports teams and in close-knit communities across the United States. Two possible contributing factors include waning vaccine-induced immunity and differences between the strain of mumps virus now circulating and the vaccine strain, which is part of the standard measles, mumps, and rubella (MMR) childhood vaccine.

"Overall, the MMR vaccine has been great, with a 99 percent reduction in measles, mumps and rubella disease and a significant reduction in associated complications since its introduction," says Sri Edupuganti, MD, MPH, associate professor of medicine (infectious diseases) at Emory University School of Medicine and medical director of the Hope Clinic of Emory Vaccine Center. "What we're seeing now with these mumps outbreaks is a combination of two things - a few people were not making a strong immune response to begin with, and the circulating strain has drifted away from the strain that is in the vaccine."

Emory and CDC scientists collaborated on a study that included 71 people, aged 18 to 23, in the Atlanta area - the largest study so far of mumps memory B cells in vaccinated people. Recruitment of participants took place in 2010. Although almost all (69/71) had received two MMR doses, 80 percent of the participants received their second MMR more than ten years before enrolling in the study.

In addition, antibodies from the participants did not neutralize wild-type mumps virus as efficiently as the vaccine virus. At least six study participants may have been potentially susceptible to infection with the currently circulating wild-type mumps strain, the paper concludes. The researchers did not see a clear relationship between the timing of vaccination and low antibody or memory B cell levels.

Other research has shown that a third MMR dose resulted in increased neutralizing antibody responses to mumps in some individuals with low neutralization titers; however, the antibody levels declined toward baseline by 1 year so the effect was not long-lasting. In 2017, the CDC's Advisory Committee on Immunization Practices approved a third dose of MMR vaccine for groups of people who are at risk because of an ongoing mumps outbreak.

The Jeryl Lynn mumps vaccine strain in the MMR vaccine was originally cultured from a scientist's daughter's throat in the 1960s. Though there is only one serotype of mumps virus, the current circulating strain ("genotype G") is genetically distinct from the vaccine strain. How these genetic changes affect the antigenic properties of the wild-type strain is not fully understood.

Symptoms of mumps include those common to viral illnesses - fatigue, body aches, headache - but a distinctive aspect is often swelling of the salivary glands. More severe cases can lead to encephalitis or deafness. The disease is spread by direct contact, droplets, or contaminated objects. It usually takes 16 to 18 days for mumps symptoms to show up after infection starts.

The first author of the paper is Ata Ur Rasheed Mohammed, PhD, previously a research associate at Emory and now at the CDC. Co-authors at Emory include Walter Orenstein, MD and Rafi Ahmed, PhD, and at the CDC, Carole Hickman, PhD, mumps team lead in the Division of Viral Diseases. Ahmed is a Georgia Research Alliance Eminent Scholar.

Emory University received a research grant through the Investigator Initiated Studies Program of Merck and Co., Inc. The study was also supported through the Cooperative Center on Human Immunology of the Emory Vaccine Center (National Institute of Allergy and Infectious Diseases U19AI057266).