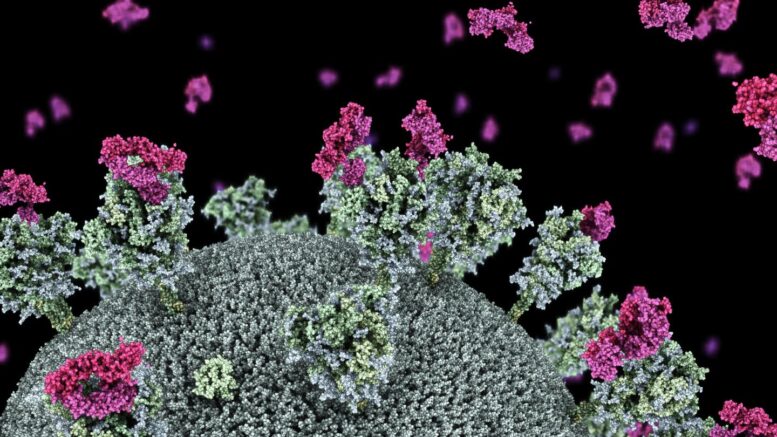 Visualization of SARS-CoV-2 virus with nanobodies (purple) attaching to the virus 'spike' protein. Courtesy of Drew Berry in collaboration with Wai-Hong Tham

Australian researchers have identified neutralizing nanobodies that block the SARS-CoV-2 virus from entering cells in preclinical models. The discovery paves the way for further investigations into nanobody-based treatments for COVID-19.

Published in PNAS, the research is part of a consortium-led effort, bringing together the expertise of Australian academic leaders in infectious diseases and antibody therapeutics at WEHI, the Doherty Institute and the Kirby Institute.

Antibodies are key infection-fighting proteins in our immune system. An important aspect of antibodies is that they bind tightly and specifically to another protein. Antibody-based therapies, or 'biologics', harness this property of antibodies, enabling them to bind to a protein involved in disease. Nanobodies are unique antibodies - tiny immune proteins - produced naturally by alpacas in response to infection.

WEHI associate professor Wai-Hong Tham, who led the research, said the establishment of a nanobody platform at WEHI allowed an agile response for the development of antibody-based therapies against COVID-19.

Tham said the leading nanobodies that block virus entry were then combined into a 'nanobody cocktail."

"By combining the two leading nanobodies into this nanobody cocktail, we were able to test its effectiveness at blocking SARS-CoV-2 from entering cells and reducing viral loads in preclinical models," she said.

ANSTO's Australian Synchrotron and the Monash Ramaciotti Centre for Cryo-Electron Microscopy were critical resources in the project, allowing the research team to map how the nanobodies bound to the spike protein and how this impacted the virus' ability to bind to its human receptor.

"We were able to directly image and map the neutralizing interaction of the nanobodies with the spike protein using Cryo-EM at near atomic resolution," Venugopal said. "Cryo-EM has been an important drug discovery tool in the global response to the COVID-19 pandemic."

By mapping the nanobodies, the research team was able to identify a nanobody that recognized the SARS-CoV-2 virus, including emerging global variants of concern. The nanobody was also effective against the original SARS virus (SARS-CoV), indicating it may provide cross-protection against these two globally significant human coronaviruses.

"In the wake of COVID-19, there is a lot of discussion about pandemic preparedness. Nanobodies that are able to bind to other human beta-coronaviruses - including SARS-CoV-2, SARS-CoV and MERS - could prove effective against future coronaviruses as well," Tham said.