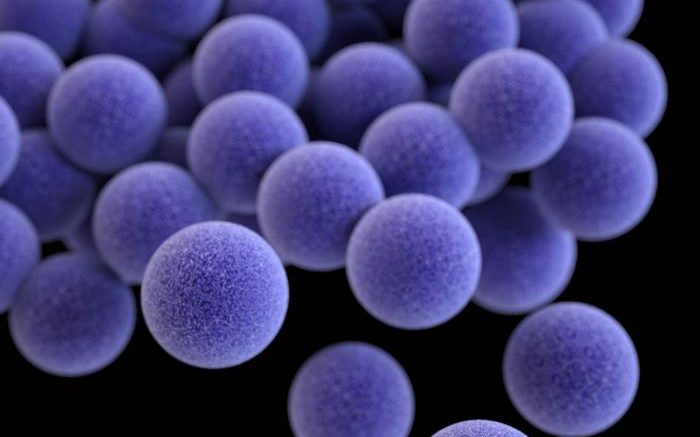 This illustration depicts a three-dimensional (3D) computer generated image of a group of methicillin-resistant, Staphylococcus aureus (MRSA) bacteria, which were arranged in a cluster. The artistic recreation was based upon scanning electron microscopic (SEM) imagery. Courtesy of CDC/ James Archer

Staphylococcus aureus bacteria are one of the main causes of hospital-acquired infections. These pathogens are particularly problematic because they can form highly robust biofilms on both natural and artificial surfaces and are very difficult to remove. The biofilm effectively protects the individual bacteria from attack by other substances, such as antibiotics, making them very hard to treat. One approach is therefore to try and stop biofilms from forming in the first place. But in order to be able to influence biofilm growth, researchers need to understand the mechanisms by which the bacteria adhere to different types of materials. Surfaces such as door handles or medical implants have nanoscale topographies (1 nanometre = one billionth of a metre) and are widespread in hospital environments. Under the microscope, these apparently smooth surfaces show up as rough, irregular landscapes of mountains and valleys.

In an earlier study, the team from Saarland University, led by experimental physicist Professor Karin Jacobs and microbiologist Professor Markus Bischoff, discovered that the bacteria adhered to solid surfaces by a mechanism in which numerous individual molecules in the bacterial cell wall become tethered to the surface. The dimensions of these tethering molecules vary due to thermal fluctuations that can induce length changes of around 50 nanometres.

In their most recent study, the scientists undertook a detailed examination of how the adhesive strength of individual molecules depends on the topography of the substrate surface. The research team prepared silicon surfaces exhibiting nanostructures of different sizes but of the same order of magnitude as the tethering molecules in the cell wall.

They then measured the forces with which the individual bacterial cells adhered to the nanostructured surfaces. These experiments showed that the adhesive forces diminished with increasing size of the nanostructures. While the experimental work was being performed, the mathematician Michael A. Klatt from the Karlsruhe Institute of Technology (now at Princeton University) carried out a very precise analysis of the silicon substrates and quantified the surface geometries using specific mathematical shape measures called Minkowski functionals. The procedure is known as 'morphometry'.

Working together, the teams were able to show that the magnitude of the experimentally determined adhesive force could be explained using geometrical parameters from the morphometric analysis. Put simply, if the roughness of the surface increases, many of the 'valleys' on the surface are no longer available as adhesion sites as they are now deeper than the length of the fluctuating molecules. There is therefore a corresponding reduction in the adhesive force between the bacterial cells and the surface.

This is an important result as it suggests that optimizing the nanostructured topography of a surface can minimize bacterial adhesion and thus reduce the likelihood of biofilm formation. The research team point out that this result can also be applied to other types of bacteria and to other types of surface. The study's findings may well help to develop novel materials and to improve existing materials that are better able to inhibit bacterial adhesion and the formation of biofilms.

The study also demonstrates the power of Minkowski functionals in characterizing the topography of a wide range of materials. The researchers believe that the broad applicability of morphometric analysis means that in future Minkowski functionals will be used as the gold standard for describing such surfaces.