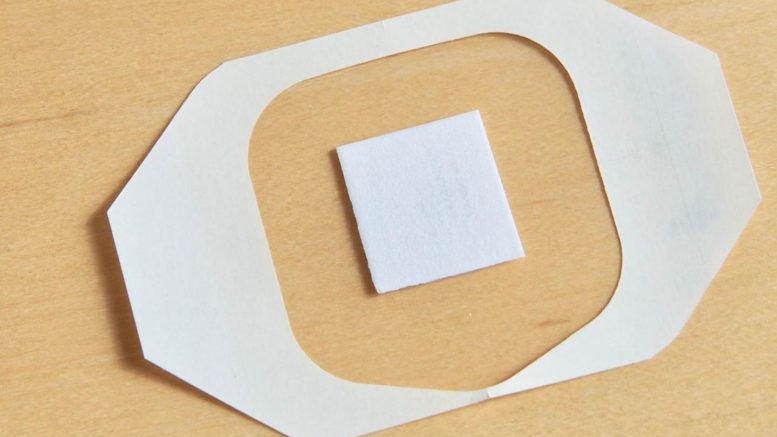 The new patch. Courtesy of University of Rochester Medical Center

A new needle-free flu vaccine patch revved up the immune system much like a traditional flu shot without any negative side effects, according to a study published in the Journal of Investigative Dermatology. Though the research is in the early stages (the patch hasn't been tested in humans), it's an important step toward a technology that could replace needle-based vaccination methods that require administration by health care workers and biohazard waste removal.

"Scientists have been studying needle-free vaccine approaches for nearly two decades, but none of the technologies have lived up to the hype," said Benjamin L. Miller, PhD, corresponding author and Dean's Professor of Dermatology at the University of Rochester Medical Center. "Our patch overcomes a lot of the challenges faced by microneedle patches for vaccine delivery, the main method that's been tested over the years, and our efficacy and lack of toxicity make me excited about the prospect of a product that could have huge implications for global health."

Transporting big molecules like flu vaccine proteins across the skin is difficult to do, as the skin is intended to keep things out of the body, not to let them in. The study team took lessons learned from the research and treatment of a common inflammatory skin disease to overcome this hurdle and inform their flu vaccine patch strategy.

In patients with eczema, or atopic dermatitis, the skin barrier is leaky, allowing pollens, molds and a host of other allergens to enter through the skin and be sensed by the immune system. Lisa A. Beck, MD, corresponding author and Dean's Professor of Dermatology at the University of Rochester Medical Center discovered that the expression of a protein called claudin-1 helps maintain barrier strength and lessen the permeability of the skin. Claudin-1 is significantly reduced in eczema patients (hence the leaky skin barrier) compared to individuals without the disease.

In past research, Beck found that decreasing claudin-1 expression in skin cells from healthy donors made the skin more permeable. Beck, Miller, and first author Matthew Brewer, PhD, wondered if they could use this induced permeability to get a flu vaccine virus through the skin. The key would be to disrupt the skin barrier long enough to deliver the virus, but not so long to let unwanted things in.

Miller, a chemist, worked with Brewer, who was trained in vaccine biology and immunology, to develop synthetic peptides that bind to and inhibit claudin-1 in an effort to open up the skin barrier. They tested their formulations in human skin cells and identified a peptide that disrupted the barrier without any toxic effects.

Next, they designed a patch containing the synthetic peptide and a recombinant flu vaccine and tested two scenarios. In the first, they placed the patch on mice to prime the immune system and subsequently administrated an intramuscular flu shot to boost immunity. In the second they did the opposite, delivering an intramuscular flu shot first to prime the immune system followed by the patch to boost immunity.

In both scenarios they placed the flu vaccine patch, which looks like a tiny piece of tape, on the backs of mice and left if there for as little as 18 and as long as 36 hours. The patch effectively opened up the skin barrier, as measured by water loss through the skin.

When the patch was placed first there wasn't a significant immune response, suggesting that it might not be effective at taking a flu naïve infant who hasn't received a flu shot or been exposed to the virus to adequate protection. But, it did initiate a robust immune response (as measured by an increase in antibodies to the flu vaccine virus) when it followed the intramuscular shot, suggesting it could boost preexisting immunity for anyone six months or older who has been vaccinated and/or exposed to the virus (mimicking what happens when we get seasonal flu shots year after year).

Importantly, the team saw no physical changes in the skin over the three month period the mice were observed, meaning that the brief barrier disruption didn't increase the risk of infection.

"When we applied the patch with the peptide the mouse skin became permeable for a short time," said Brewer, a postdoctoral fellow in both the Beck and Miller labs. "But as soon as the patch was removed the skin barrier started to close. We saw significant differences as early as one hour after removal, and by 24 hours the skin was back to normal, which is great news from a safety standpoint."

Current needle-based vaccines are effective but require medical personnel to deliver, generate biohazards (sharps) requiring disposal, and cause patients pain and anxiety - all barriers to delivery in developing world countries, which are the areas of greatest need.

"These countries don't have the manpower to vaccinate entire populations," said Beck. "On top of that, there's an aversion to health care in many of these communities. A needle is painful, it's invasive, and that makes things more difficult when you are dealing with a cultural bias against preventative medicine."

A flu vaccine patch could provide a non-invasive way to administer vaccines quickly and cheaply to large numbers of people.

"If you want to vaccinate a village in Africa you don't want to do it with needles," added Miller. "A patch doesn't have to be refrigerated, it can be applied by anyone, and there are no concerns about disposal or needles getting reused."

There's a lot more work to be done on the flu vaccine patch, including additional animal studies to help the team optimize the amount of time the patch must remain on the skin to appropriately boost the immune response. The team hopes to conduct human trials in the future, and believes that if the patch is effective in people it could work for diseases for which there's already a needle-based vaccine.

The research was funded by a technology development grant from UR Ventures and grants from the National Institutes of Health. In addition to Miller, Beck and Brewer, Elizabeth Anderson, Radha Pandya, Anna DeBenedetto, Takeshi Yoshida, Tom Hilimire and Luis Martinez-Sobrido contributed to the study. Two of the synthetic peptides developed by the team are patented and two are under a provisional patent.