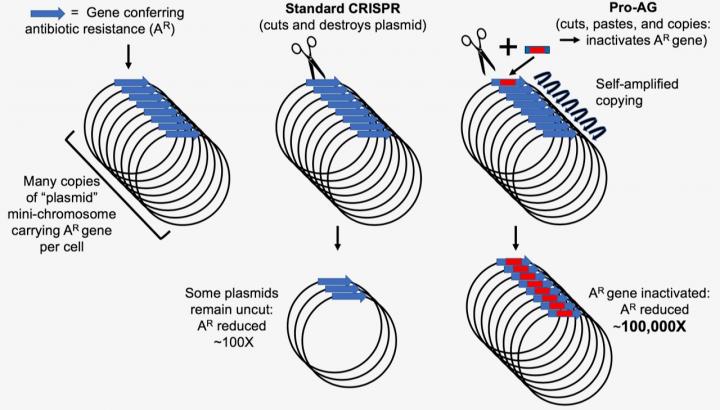 Genes conferring antibiotic resistance (AR) in bacteria (blue arrow) are often carried on circular mini-chromosome elements referred to as plasmids. Site-specific cutting of these plasmids using the CRISPR system, which results in destruction of the plasmid, has been used to reduce the incidence of AR by approximately 100 fold. Pro-Active Genetics (Pro-AG) employs a highly efficient cut-and-paste mechanism that inserts a gene cassette (red box) into the gene conferring AR thereby disrupting its function. The Pro-AG donor cassette is flanked with sequences corresponding to its AR target (blue boxes) to initiate the process. Once inserted into an AR target gene, the Pro-AG element copies itself through a self-amplifying mechanism leading to an approximately 100,000-fold reduction in AR bacteria. Courtesy of Bier Lab, UC San Diego

Taking advantage of powerful advances in CRISPR gene editing, scientists at the University of California San Diego have set their sights on one of society's most formidable threats to human health.

A research team led by Andrés Valderrama at UC San Diego School of Medicine and Surashree Kulkarni of the Division of Biological Sciences has developed a new CRISPR-based gene-drive system that dramatically increases the efficiency of inactivating a gene rendering bacteria antibiotic-resistant. The new system leverages technology developed by UC San Diego biologists in insects and mammals that biases genetic inheritance of preferred traits called "active genetics." The new "pro-active" genetic system, or Pro-AG, is detailed in a paper published December 16 in Nature Communications.

Widespread prescriptions of antibiotics and use in animal food production have led to a rising prevalence of antimicrobial resistance in the environment. Evidence indicates that these environmental sources of antibiotic resistance are transmitted to humans and contribute to the current health crisis associated with the dramatic rise in drug-resistant microbes. Health experts predict that threats from antibiotic resistance could drastically increase in the coming decades, leading to some 10 million drug-resistant disease deaths per year by 2050 if left unchecked.

The core of Pro-AG features a modification of the standard CRISPR-Cas9 gene editing technology in DNA. Working with Escherichia coli bacteria, the researchers developed the Pro-AG method to disrupt the function of a bacterial gene conferring antibiotic resistance. In particular, the Pro-AG system addresses a thorny issue in antibiotic resistance presented in the form of plasmids, circular forms of DNA that can replicate independently of the bacterial genome. Multiple copies of, or "amplified," plasmids carrying antibiotic-resistant genes can exist in each cell and feature the ability to transfer antibiotic resistance between bacteria, resulting in a daunting challenge to successful treatment. Pro-AG works by a cut-and-insert repair mechanism to disrupt the activity of the antibiotic resistant gene with at least two orders of magnitude greater efficiency than current cut-and-destroy methods.

Valderrama and Kulkarni, working in the UC San Diego labs of study coauthors Professors Victor Nizet and Ethan Bier, respectively, demonstrated the effectiveness of the new technique in experimental cultures containing a high number of plasmids carrying genes known to confer resistance to the antibiotic ampicillin. The system relies on a self-amplifying "editing" mechanism that increases its efficiency through a positive feedback loop. The result of Pro-AG editing is the insertion of tailored genetic payloads into target sites with high precision.

While Pro-AG is not yet ready for treating patients, "a human delivery system carrying Pro-AG could be deployed to address conditions such as cystic fibrosis, chronic urinary infections, tuberculosis and infections associated with resistant biofilms that pose difficult challenges in hospital settings," said Nizet, distinguished professor of Pediatrics and Pharmacy and the faculty lead of the UC San Diego Collaborative to Halt Antibiotic-Resistant Microbes (CHARM).

When combined with a variety of existing delivery mechanisms for spreading the Pro-AG system through populations of bacteria, the scientists say the technology also could be widely effective in removing, or "scrubbing," antibiotic-resistant strains from the environment in areas such as sewers, fish ponds and feedlots. Because Pro-AG "edits" its targets rather than destroys them, this system also enables engineering or manipulating bacteria for a broad range of future biotechnological and biomedical applications rendering them harmless or even recruiting them to perform beneficial functions.

"The highly efficient and precise nature of Pro-AG should permit a variety of practical applications, including dissemination of this system throughout populations of bacteria using one of several existing delivery systems to greatly reduce the prevalence of antibiotic resistance in the environment," said Bier, a distinguished professor in the Section of Cell and Developmental Biology and science director of the UC San Diego unit of the Tata Institute for Genetics and Society (TIGS).