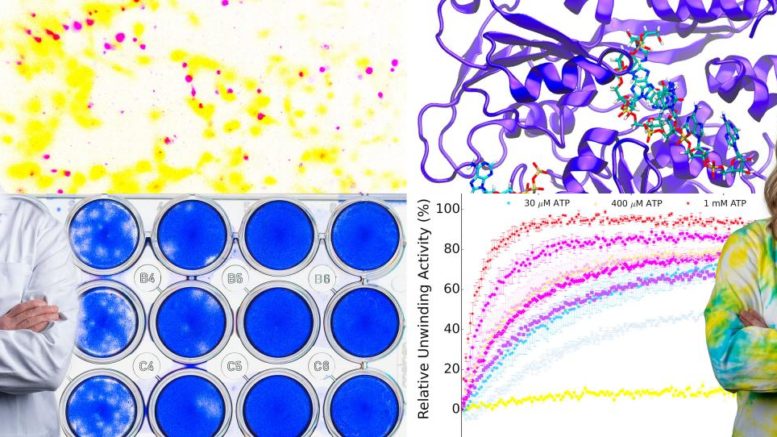 An interdisciplinary team of researchers at Colorado State University has used computational chemistry, biochemistry and virology to uncover new information on how viruses such as West Nile, dengue and Zika replicate. Based on their research, the team said these viruses appear to cripple their own genome replication machinery.

CSU researchers described the results as "surprising," and said the findings have implications for future vaccine and antiviral drug development.

The study, "Motif V regulates energy transduction between the flavivirus NS3 ATPase and RNA-binding cleft," was published in the Journal of Biological Chemistry on Feb. 7.

Kelly Du Pont, first author of the study and a doctoral candidate in chemistry at CSU, studies Nonstructural Protein 3 - or NS3 - in flaviviruses, which cause a number of diseases in humans. NS3 is a key enzyme that these viruses use to copy their genomes.

For flaviviruses to replicate, the NS3 helicase - a viral enzyme that binds or remodels nucleic acid - has to unwind the double-stranded ribonucleic acid. NS3 uses adenosine triphosphate or ATP, a molecule abundant in cells, as fuel to power the unwinding.

"The release of energy from the fuel drives the pistons up and down to turn the transmission and then the wheels, causing the car to move forward," she said. "NS3 uses ATP as its fuel to unwind the double-stranded ribonucleic acid, but we don't know where the crankshaft or transmission is for this machine."

Researchers described the results as "surprising," and said the findings have implications for future vaccine and antiviral drug development. Courtesy of Joe Mendoza/CSU Photography

Du Pont said this research was initially focused on trying to figure out what part of the NS3 protein acts as its molecular transmission. While studying the process, the team identified the part of NS3 that acts as a brake during unwinding.

If researchers can learn more about how NS3 unwinds the double-stranded ribonucleic acid and how this process is controlled, they could potentially target areas within the helicase for development of drugs to treat virus-caused diseases.

Brian Geiss, senior author on the study and associate professor of microbiology at CSU, said the findings could also one day lead to improved development of vaccines against these viruses.

"Most vaccines are developed by finding random mutations that slow down virus growth," he said. "By understanding how viral enzymes like NS3 work in great detail, we can use that information to rationally design new mutant viruses that replicate less well and act better as a vaccine, without having to rely on chance to make the vaccine. This can help develop vaccines more rapidly and precisely."

Du Pont, who specializes in creating computational simulations, has been working in Geiss's lab in the Department of Microbiology, Immunology and Pathology. While interdisciplinary work is common at CSU, Geiss said the breadth of Du Pont's project is not typical.

"Kelly represents a true interdisciplinary scientist who can use the tools and knowledge from many different areas of science to answer previously unanswerable questions," he said. "She uses computational chemistry, protein biochemistry and enzymology, and classical virology techniques to study how these viruses work in unprecedented detail. Kelly is what I hope we will see more of in terms of the scientist of the future," he said.

The research team is now taking a closer look at how changes in NS3 affect replication of the virus and how the changes affect the ability of the virus to kill cells. Du Pont and Geiss are also working with the Ebel Laboratory at CSU to see how viruses with altered NS3 proteins infect mosquitoes and alter their survival during infection.