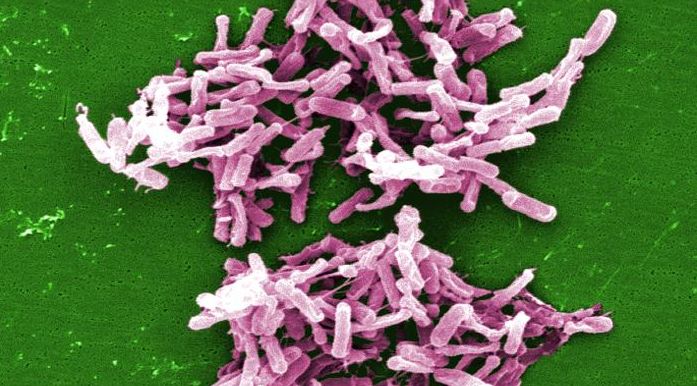 C. difficile. Courtesy of the CDC

A process called sporulation that helps the dangerous bacterium Clostridium difficile (C. difficile) to survive inhospitable conditions and spread is regulated by epigenetics, factors that affect gene expression beyond the DNA genetic code, researchers at the Icahn School of Medicine at Mount Sinai report. This is the first discovery that epigenetics regulate sporulation in any bacteria. Their research, published November 25th in Nature Microbiology, opens a new window to developing treatments for this devastating infection.

C. difficile infects nearly half a million people each year, causing severe diarrhea and killing just under 10 percent of those over 65 who contract it. Spores of the bacteria, which are spread through feces, are extremely resilient and can survive outside the body for weeks or months, infecting individuals who come in contact with contaminated surfaces.

Since the infection is so common and devastating, the C. difficile genome has been well studied, but Gang Fang, PhD, associate professor of genetics and genomic sciences at Mount Sinai’s Icahn Institute for Data Science and Genomic Technology and senior author of the study, says he and his colleagues took a different approach in their research.

“We wanted to study beyond the genetic code of the bacteria and look at what chemical modifications were being made to the genome,” said Fang. While these epigenetic chemical modifications, called methylation, do not alter the sequence of a gene, they can modify a particular gene’s activity to render it more or less active, which has profound impacts on the organism’s function.

Fang’s team pioneered the use of third-generation DNA sequencing to map epigenetic factors in bacteria in 2012 and began studying C. difficile epigenetics in 2015. First, the team isolated C. difficile from fecal samples of 36 patients in the intensive care unit (ICU) at Mount Sinai Hospital who had been infected with it. They analyzed the samples and found one particular epigenetic pattern that was highly conserved throughout all the samples. Next, they checked about 300 C. difficile genomes from GenBank, a databank of genetic sequences run by the National Institutes of Health, and found that all shared the same gene responsible for the epigenetic pattern found in the ICU patients.

Suspecting this epigenetic pattern was playing a crucial role in the function of the bacteria, Fang’s team collaborated on two further studies of C. difficile sporulation and mice infected with C. difficile, with the lab of Aimee Shen, PhD, associate professor of molecular biology and microbiology at Tufts University Medical School and a co-senior author of the study, and with the lab of Rita Tamayo, PhD, associate professor of microbiology and immunology at the University of North Carolina, Chapel Hill. In one study with mice, the researchers found that when they inhibited the gene responsible for the epigenetic pattern, as much as 100 times less bacteria was present after six days compared to unaltered bacteria.

Fang says the findings in these studies underscore the significance of epigenetics in the study of bacteria and drug development for infection.

In addition to offering new epigenetic insights into the study of C. difficile and possible targets for drug development, Fang hopes this research will encourage further studies of the epigenetic characteristics of bacteria. “This is just the beginning of our understanding of epigenetic regulation in bacteria; there are still so many questions yet to be answered,” said Fang. “We hope this exciting discovery will encourage further interdisciplinary collaborations to investigate epigenetics of bacteria and how we can use these new insights to develop life-saving treatments for infection.”

1 Comment on "New Discovery in C. difficile Biology Could Lead to Treatments for Dangerous Bacterial Infections"