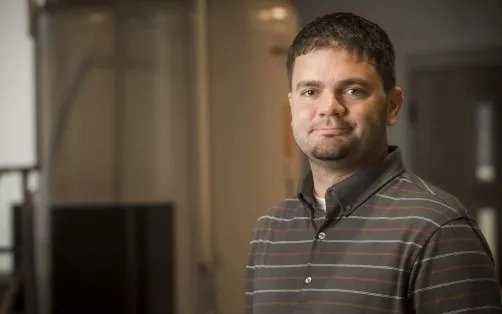 Chad Petit, PhD, and colleagues at the University of Alabama at Birmingham fight influenza at the molecular level, in part by finding natural mutations in the viral RNA genome that have a functional impact during infection. Discovering how the virus uses these unknown mechanisms to stop your body from mounting an effective defense against infection, Petit said, “will better prepare us to predict the pandemic potential of influenza A virus and aid in the development of vaccines and antivirals.”

Influenza A is dangerous because each year it adapts to various hosts and undergoes genetic reassortment. This generates a constant stream of unique strains that have unknown degrees of pathogenicity, transmissibility and ability to cause international pandemics.

Petit’s latest research, published in the Journal of Biological Chemistry, takes a detailed look at a naturally occurring mutation in a flu strain from a 1972 Russian outbreak that the UAB team described in 2015, while comparing that Russian strain to the 1918 strain responsible for Spanish flu.

The mutation is in the flu protein NS1. In 2015, Petit and his UAB colleagues were the first to show that NS1 from the 1918 strain had a direct interaction with RIG-I, the cell’s main sensor to detect flu virus infection and to then launch an innate immune defense. Furthermore, the portion of the 1918 NS1 RNA binding domain that bound to RIG-I had no previously known function. In contrast to the 1918 NS1, Petit’s lab found that the NS1 from the influenza A strain 1972 Udorn was unable to bind to the RIG-I site that interacted with the 1918 NS1.

Now, Petit and colleagues report the biological effects of NS1 binding to RIG-I — the binding directly quiets the alarm that activates the cellular innate immunity defense against the infection. This is a newly described way to antagonize the host cellular antiviral response.

“NS1 is almost like the Swiss army knife of proteins because it has so many functions,” said Petit, an assistant professor in the UAB Department of Biochemistry and Molecular Genetics. NS1 appears to interact with 20 to 30 host proteins, and compared with other flu proteins, NS1 also has remarkable genetic plasticity, meaning that its effect on virulence can vary among strains.

Study details
The mutation in the Udorn NS1 protein is a change of a single amino acid at position 21 from arginine to glutamine. In the current research, the UAB researchers used reverse genetics to engineer that mutation into a 1934 Puerto Rico flu strain, and then they compared how the wild type NS1 and mutant NS1 proteins functioned.

Using a variety of molecular biology tools, the UAB researchers found that, while the wild type NS1 antagonizes RIG-I signaling to start the alarm sequence, the mutant NS1 permitted that signaling. Specifically, the mutant NS1 was significantly less able to bind to RIG-I, which allowed the triggering of innate immunity — notably by increasing TRIM-25 ubiquitination of RIG-I, which is the critical step to activate RIG-I. That led to increased IRF3 phosphorylation and increased production of type I interferon.

However, the changed amino acid in the mutant NS1 had no effect on two other known ways that NS1 can block the cellular innate immunity response — binding to double-stranded RNA and binding with the TRIM-25 cellular protein. Thus, Petit and colleagues have described an additional tool on NS1 to increase viral survival.

But the UAB researchers are left with a particularly outstanding question — why does the arginine-to-glutamine mutation at amino acid-21 naturally occur if it leads to an increased antiviral response during infection? This seems counterintuitive in terms of evolution.

“Taken together, the work presented in this study,” Petit said, “stresses the importance of how strain-specific polymorphisms in NS1 can affect its ability to antagonize the host cellular immune response in ways that are yet to be appreciated.”

Co-authors with Petit in the study, “The influenza NS1 protein modulates RIG-I activation via a strain-specific direct interaction with the second CARD of RIG-I,” are Alexander S. Jureka and Alex B. Kleinpeter, UAB Department of Biochemistry and Molecular Genetics; and Jennifer L. Tipper and Kevin S. Harrod, UAB Department of Anesthesiology and Perioperative Medicine, Division of Molecular and Translational Biomedicine.