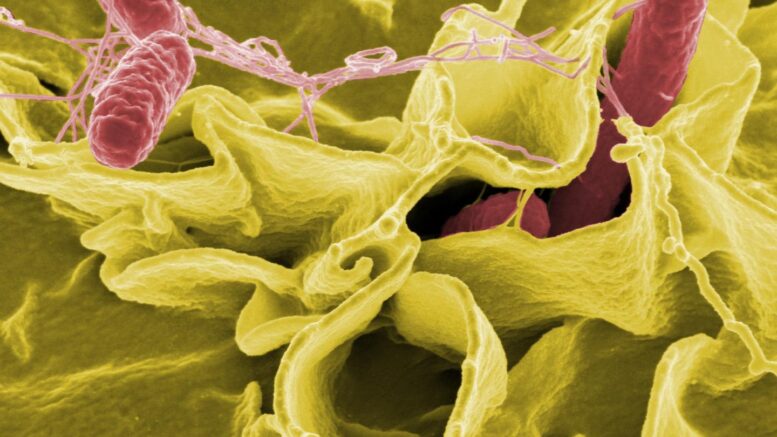 With the COVID-19 vaccines on many people's minds, some may be surprised to learn that we do not yet have vaccines for many common infectious diseases.

Take salmonella, for example, which can infect people through contaminated food, water and animals. According to the World Health Organization, non-typhoidal salmonella infection affects more than 95 million people globally each year, leading to an estimated 2 million deaths annually. There is no approved vaccine for salmonella in humans, and some strains are antibiotic-resistant.

But just as scientists spent decades doing the basic research that made the eventual development of the COVID-19 vaccines possible, University of Florida researchers led by Mariola Edelmann in the department of microbiology and cell science, UF/IFAS College of Agricultural and Life Sciences, are laying the groundwork for an effective vaccine for salmonella and other hard-to-treat bacterial infections. In their study supported by the National Institutes of Health and published in PLOS Pathogens, the UF/IFAS scientists demonstrate a novel approach to triggering immunity against salmonella.

This approach takes advantage of how cells communicate with each other, said Winnie Hui, first author of the study, which was conducted while she was a doctoral candidate in microbiology and cell science.

"Cells communicate with each other through particles called extracellular vesicles or EVs. Think of these like molecular telephones that let cells talk to each other. We wanted to know if some of those messages included information related to immune response," said Hui, who graduated from the UF/IFAS College of Agricultural and Life Sciences in 2019 and is now a postdoctoral researcher in the UF College of Medicine, division of rheumatology and clinical immunology.

"Host EVs have not been previously studied in the context of fighting enteric bacterial infections, so that is part of what makes our approach new and adds to the field," said Edelmann, senior author on the study, Hui's dissertation director and an assistant professor of microbiology and cell science.

Edelmann hypothesized that a specific type of EVs called exosomes were part of the immune response against salmonella and may one day hold the key to developing a vaccine.

To test their idea, the research team took exosomes from white blood cells infected with salmonella. Inside those exosomes, which measure just a few dozen nanometers across, they found salmonella antigens, which are bits of salmonella protein known to trigger an immune response.

Next, the researchers wanted to know if these exosomes might function as a vaccine, helping the body build up its defenses against salmonella, said Lisa Emerson, one of the study's co-authors and a doctoral student in Edelmann's laboratory.

"We put the exosomes in 'nanobubbles' that the mice inhaled. Later, we ran tests to see how their immune systems responded," said Emerson, who is in the UF/IFAS College of Agricultural and Life Sciences.

The researchers found that after they introduced the exosomes containing salmonella antigens, the exosomes localized to tissues that produce mucous, activating specific cells at these sites. Weeks later, mice developed antibodies against salmonella and specific cellular immune responses, which typically target this bacterium for elimination. For the researchers, this is a promising result.

"There are two types of immune responses generated when our bodies encounter a pathogen. The first one is called innate immunity, which is an immediate response to an infection, but it is also less specific. The other response is called adaptive immunity, and this protective response is specifically tailored to a given pathogen, but it also takes longer to develop. Exosomes generated by infected white blood cells stimulated both of these responses in animals," said Hui.

While these results show promise, more research will be needed before we have a salmonella vaccine that works in humans, Hui said.

"Our study has identified a novel role of exosomes in the protective responses against salmonella, but we also think that exosomes can find broader applications for other intestinal infections and beyond," Edelmann said.

"Exosomes have this unique capability to encapsulate precious cargo while enabling its targeted delivery to tissue of interest. For many conditions and infections, this precise delivery of therapeutic payload is what makes a difference, and we are currently also evaluating exosomes in delivering cargo to other tissues of choice," said Edelmannn whose work is supported by several federal funds focused on the roles of extracellular vesicles in bacterial infections and disease and host-directed therapies against intestinal infections.