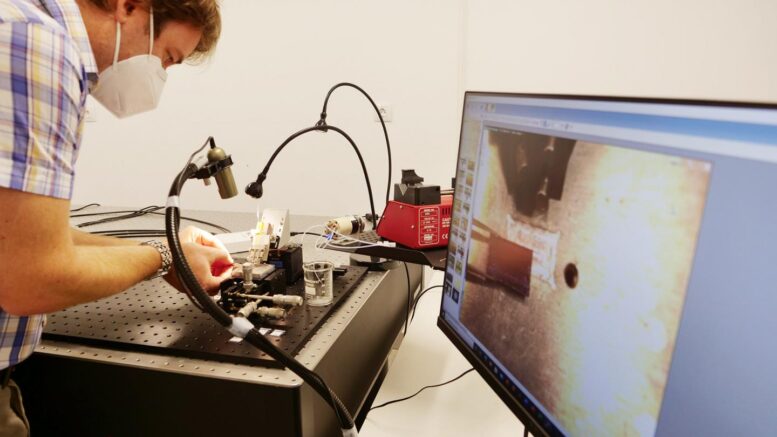 Detecting SARS-CoV-2 virus and related antibodies is essential to control the COVID-19 pandemic. A multidisciplinary team of scientists from the University of Malaga, led by Robert Halir, a researcher of the Department of Communications Engineering of the Higher Technical School of Telecommunications Engineering, aware of the limitations of current techniques, are developing a point-of-care detection system based on photonic sensors.

"PCR techniques currently applied to detect the virus are reliable, but also slow and expensive, while serological assays, though simpler, lack precision and cannot provide quantitative results", says Halir, who explains that their system will precisely add functionality and, in the future, could offer real-time results at a lower cost. To this end, it has been funded with €95,000 under the COVID-19 Fund of the Government of Andalusia to work, for one year, towards demonstrating the viability of their system.

The project was proposed by the Andalusian Centre for Nanomedicine and Biotechnology (BIONAND), and it is based on the collaboration of two R&D&I groups of the UMA: the "Biomimetic Dendrimers and Photonics Laboratory" and the "Photonics and Radiofrequency Laboratory", led by professors Ezequiel Pérez-Inestrosa and Íñigo Molina-Fernández, respectively, both members of the Biomedical Research Institute of Malaga (IBIMA).

The research team already has a real prototype of a sensing system based on photonic chips, and a measuring device, which is capable of detecting proteins in very low concentrations -inflammation and antibody biomarkers present in patients that are allergic to antibiotics. The prototype has been developed over the past four years and offers quantitative results in a matter of minutes. In fact, such is the sensitivity of the system that is capable of detecting changes in the refraction index of a one-hundred-millionth.

This multidisciplinary project aims to adapt the system for the detection of SARS-CoV-2 and its antibodies, as well as optimize and reduce the price of the measuring device. To this end, they are going to work on two lines: keep improving the optical sensitivity of the sensor and develop chemical protocols so that only a specific protein that expresses SARS-CoV-2, or the antibodies to such protein, as appropriate, adhere to the surface of the waveguides. "If results are satisfactory, in the future we will be able to develop a completely functional point-of-care equipment to be deployed in primary healthcare centers", says Halir.

According to the researcher, cost reduction would be significant compared to PCR testing, because these tests could be performed directly by family doctors, thus saving the costs of being processed in specialized laboratories and, also, the time frame for results, which would be obtained in a fraction of an hour.

On the other hand, regarding serological assays, the advantage would be the possibility of detecting lower concentrations of antibodies and, also, determining the exact number of antibodies a tested person has. "If we succeed, we believe that a commercial prototype could be developed in the near future", says Halir.