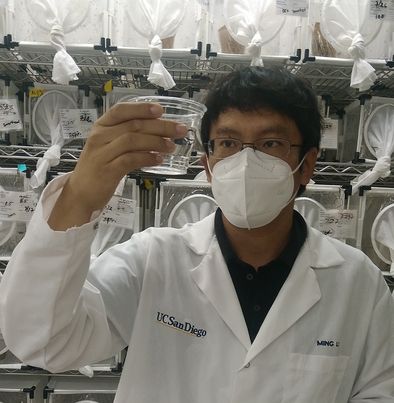 Leveraging advancements in CRISPR-based genetic engineering, researchers at the University of California San Diego have created a new system that restrains populations of mosquitoes that infect millions each year with debilitating diseases.

“pgSIT is a new scalable genetic control system that uses a CRISPR-based approach to engineer deployable mosquitoes that can suppress populations,” said UC San Diego biological sciences professor Omar Akbari. “Males don’t transmit diseases so the idea is that as you release more and more sterile males, you can suppress the population without relying on harmful chemicals and insecticides.”

Details of the new pgSIT are described Sept. 10, 2021, in the journal Nature Communications.

pgSIT differs from “gene drive” systems that could suppress disease vectors by passing desired genetic alterations indefinitely from one generation to the next. Instead, pgSIT uses CRISPR to sterilize male mosquitoes and render female mosquitoes, which spread disease, as flightless. The system is self-limiting and is not predicted to persist or spread in the environment, two important safety features that should enable acceptance for this technology.

Akbari says the envisioned pgSIT system could be implemented by deploying eggs of sterile males and flightless females at target locations where mosquito-borne disease spread is occurring.

“Supported by mathematical models, we empirically demonstrate that released pgSIT males can compete, and suppress and even eliminate mosquito populations,” the researchers note in the Nature Communications paper. “This platform technology could be used in the field, and adapted to many vectors, for controlling wild populations to curtail disease in a safe, confinable and reversible manner.”

Although molecular genetic engineering tools are new, farmers have been sterilizing male insects to protect their crops since at least the 1930s. United States growers in the 1950s began using radiation to sterilize pest species such as the New World Screwworm fly, which is known to destroy livestock. Similar radiation-based methods continue today, along with the use of insecticides. pgSIT is designed as a much more precise and scalable technology since it uses CRISPR—not radiation or chemicals—to alter key mosquito genes. The system is based on a method that was announced by UC San Diego in 2019 by Akbari and his colleagues in the fruit fly Drosophila.

As envisioned, Akbari says pgSIT eggs can be shipped to a location threatened by mosquito-borne disease or developed at an on-site facility that could produce the eggs for nearby deployment. Once the pgSIT eggs are released in the wild, typically at a peak rate of 100-200 pgSIT eggs per Aedes aegypti adult, sterile pgSIT males will emerge and eventually mate with females, driving down the wild population as needed.

Beyond Aedes aegypti, the researchers believe the pgSIT technology could be directed to other species that spread disease.

“… This study suggests pgSIT may be an efficient technology for mosquito population control and the first example of one suited for real-world release,” the researchers say. “Going forward, pgSIT may provide an efficient, safe, scalable, and environmentally friendly alternative next-generation technology for wild population control of mosquitoes resulting in wide-scale prevention of human disease transmission.”

Funding for the research was provided by a DARPA Safe Genes Program Grant (HR0011-17-2-0047); the National Institutes of Health (R01AI151004 and R56-AI153334); the U.S. Army Research Office (cooperative agreement W911NF-19-2-0026 for the Institute for Collaborative Biotechnologies); and the Innovative Genomics Institute.

Note: Akbari is a co-founder with equity interest, and former consultant, scientific advisory board member and income recipient of Agragene Inc.