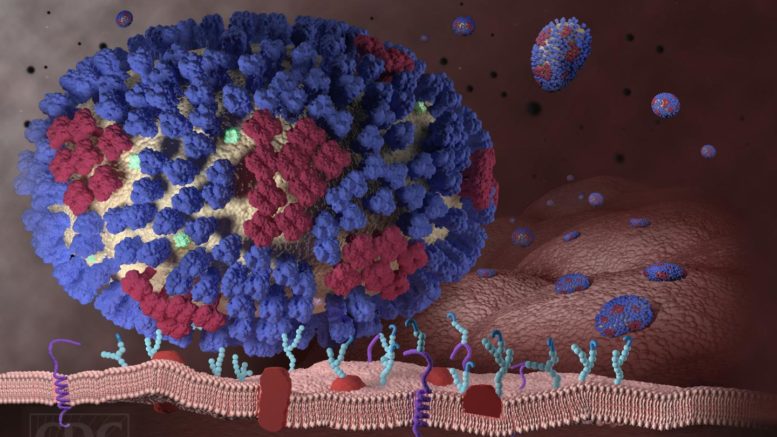 An influenza virus binds to receptors on a respiratory tract cell, allowing the virus to enter and infect the cell. Courtesy of Centers for Disease Control and Prevention

A Rutgers-led team has developed a tool to monitor influenza A virus mutations in real time, which could help virologists learn how to stop viruses from replicating.

The gold nanoparticle-based probe measures viral RNA in live influenza A cells, according to a study in The Journal of Physical Chemistry C. It is the first time in virology that experts have used imaging tools with gold nanoparticles to monitor mutations in influenza, with unparalleled sensitivity.

"Our probe will provide important insight on the cellular features that lead a cell to produce abnormally high numbers of viral offspring and on possible conditions that favor stopping viral replication," said senior author Laura Fabris, an associate professor in the Department of Materials Science and Engineering in the School of Engineering at Rutgers University-New Brunswick.

Viral infections are a leading cause of illness and deaths. The new coronavirus, for example, has led to more than 24,000 confirmed cases globally, including more than 3,200 severe ones and nearly 500 deaths as of Feb. 5, according to a World Health Organization report.

Influenza A, a highly contagious virus that arises every year, is concerning due to the unpredictable effectiveness of its vaccine. Influenza A mutates rapidly, growing resistant to drugs and vaccines as it replicates.

The new study highlights a promising new tool for virologists to study the behavior of influenza A, as well as any other RNA viruses, in host cells and to identify the external conditions or cell properties affecting them. Until now, studying mutations in cells has required destroying them to extract their contents. The new tool enables analysis without killing cells, allowing researchers to get snapshots of viral replication as it occurs. Next steps include studying multiple segments of viral RNA and monitoring the influenza A virus in animals.

The lead author is Kholud Dardir, who earned a doctorate at Rutgers. Rutgers co-authors include senior postdoctoral associate Hao Wang and Maria Atzampou, a doctoral student. Researchers at the University of Illinois at Urbana Champaign contributed to the study.