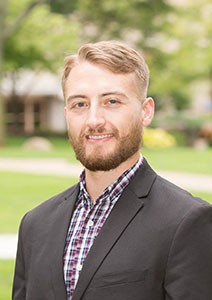 In two recent studies, including one published Oct. 1 in Trends in Parasitology, medical entomologist Riley Tedrow found that malaria-carrying mosquitoes in Madagascar, an African island nation, feed on the blood of humans and other mammals more frequently than assumed, which increases opportunities for disease transmission.

Tedrow, who conducted the research while in the biology department, co-authored the Trends in Parasitology study with Case Western Reserve colleagues Peter Zimmerman, professor of pathology at the School of Medicine, and Karen Abbott, professor of biology in the College of Arts and Sciences.

Tedrow graduated in May and now serves as a U.S. Navy medical entomologist in San Diego.

Understanding mosquito behavior is critical for surveillance and control measures in areas prone to mosquito-borne diseases. Worldwide, there were 219 million cases of malaria alone in 2017, according to the World Health Organization. More than 90 percent of malaria cases are in Africa.

It’s often assumed—although mosquito-control authorities are more likely to know this is not the case—that female mosquitoes feed once during what is known as the gonotrophic cycle—in which the insect consumes and digests a blood meal to lay eggs.

“As opposed to feeding once every three or four days as people previously thought, they are capable of feeding multiple times per egg-laying cycle,” Tedrow said. “The individual mosquito is going to have a significantly greater impact by biting more frequently. We need to do a better job at monitoring mosquito behavior to better understand disease transmission at local levels.”

Mosquitoes have been able to thwart common control measures by adapting to environmental changes, Tedrow said. They become resistant to insecticides and will change their feeding patterns.

For instance, mosquitoes denied indoor night feeding where bed nets are commonly used will, over a few generations, respond by changing to bite people outdoors during daylight hours.

The new study builds on a study published in July by Tedrow and Zimmerman from the Case Western Reserve School of Medicine Center for Global Health and Diseases that demonstrated the value of improved trapping and detection tools and generated new insight into mosquito behavior and disease transmission.

Tedrow ventured to remote villages of Madagascar, in collaboration with the country’s National Malaria Control Program, to trap the insects using a series of wide nets known as Quadrant Enabled Screen Traps, which captured significant numbers of the insects and information about their mobility.

Through analysis using a recently developed detection tool, the researchers were able to identify the mosquito species, the presence of the malaria parasite and the different mammals that the insects fed on.

The researchers found the mosquitoes feed multiple times per gonotrophic cycle, with varied diets. Mosquitoes in their study were found to feed most often on cows, then pigs and humans. These data have potential to inform public health authorities about the mosquitoes’ disease-spreading capacity.