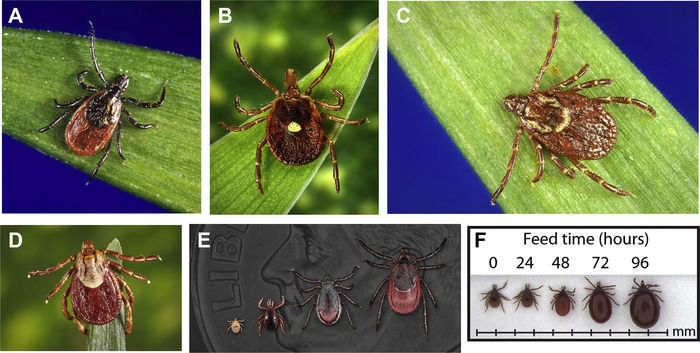 Medically important ticks found in the United States, including (A) Ixodes scapularis, (B) Amblyomma americanum, (C) Dermacentor variabilis, and (D) Dermacentor andersoni. In addition to species identification, these ticks may present in different (E) life stages and (F) levels of engorgement. Courtesy of Centers for Disease Control and Prevention

The number of cases of tick-borne illnesses (TBIs) reported annually to the Centers for Disease Control and Prevention (CDC) has more than doubled over the past two decades in the United States. An expert panel has developed a set of clinical practice guidelines that recommends low-risk interventions, employable with minimal resources, to help reduce the number of TBIs. The guidelines, issued by the Wilderness Medical Society, appear in Wilderness & Environmental Medicine.

Although Lyme disease is the most commonly reported vector-borne disease in the United States, the incidence of other TBIs, including anaplasmosis, spotted fever rickettsiosis, babesiosis, tularemia, alpha-gal syndrome, and Powassan virus, continues to rise as well. Lyme disease accounted for nearly 70% of cases of TBI reported in 2019, anaplasmosis 16%, and spotted fever rickettsiosis 10%. Experts believe that formal reporting probably underestimates the disease burden.

“TBI is influenced by the environment, geography, climate, ecology, and animal and human behavior,” explained lead author Benjamin M. Ho, MD, of Southern Wisconsin Emergency Associates. “It cannot be completely avoided given the interactions between humans and the environment. However, the overall burden of disease related to TBIs can be reduced with certain behavioral and medical adaptations.”

The Wilderness Medical Society convened an expert panel to develop evidence-based guidelines for the prevention and management of TBI. The guidelines include a brief review of the clinical presentation, epidemiology, prevention, and management of TBIs in the United States, with a primary focus on interventions that are appropriate for resource-limited settings. Their recommendations are largely consistent with those presented by the CDC and other practice guidelines, but they specifically highlight concepts most relevant to providers who encounter ticks in backcountry, austere, and limited-resource settings.

“With a changing climate that continues to influence the epidemiology of TBI, promotion and strict adherence to simple prevention measures is important,” commented Ho. “Despite the limitations of the existing literature, these guidelines provide a starting point for front-line providers to mitigate the transmission and reduce the disease burden of TBIs through education and low-risk interventions.”