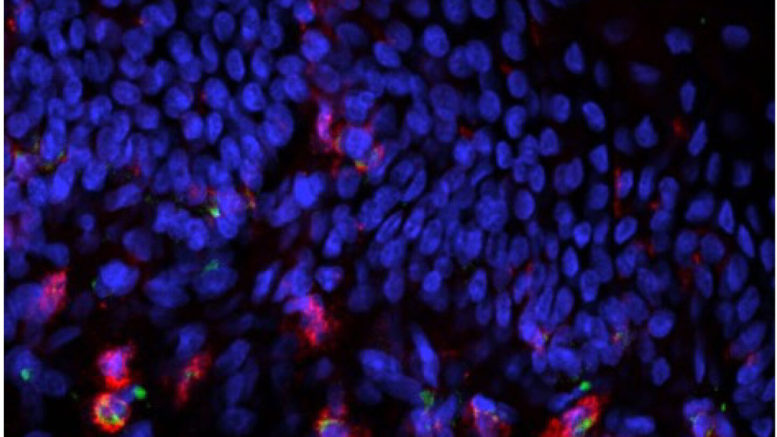 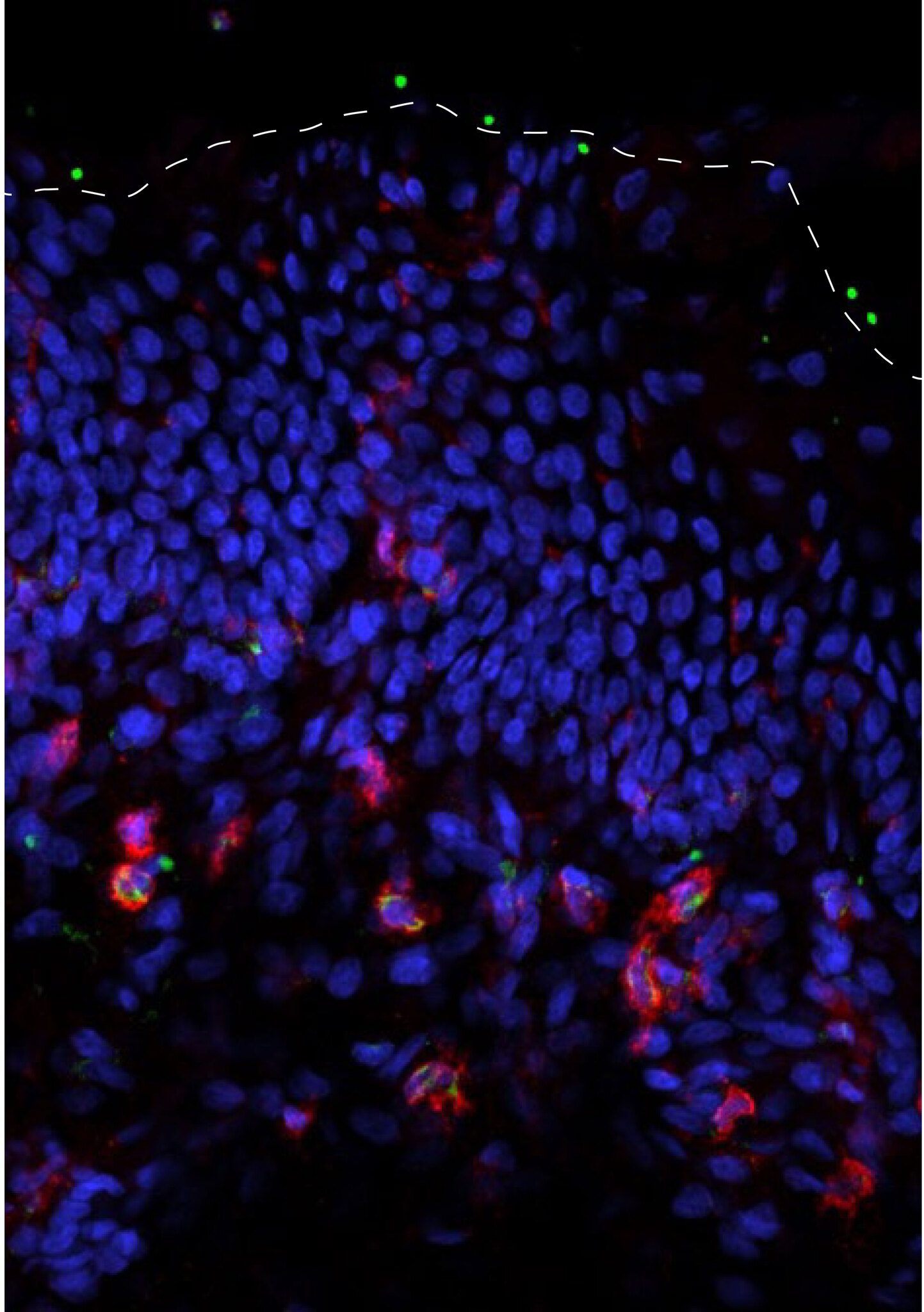 Bacteria (green dots) along the skin surface (dashed white line) and being taken up by skin immune cells (red). Courtesy of Scharschmidt Lab/UCSF

The immune system must learn from early in life to tolerate bacteria that normally populate healthy skin, while still defending against more dangerous "bugs," but how immune cells make this distinction has long been a mystery.

In a study of young mice, UC San Francisco scientists found that an early-life window of immune tolerance available to a normally harmless bacterial species is firmly closed to another, often pathogenic species -- one that is a leading cause of drug-resistant skin infections in the U.S. and occasional source of "flesh-eating" necrosis.

"It's long been clear that in infancy our developing immune systems learn to recognize our own cells and to refrain from attacking them, but it's still amazingly poorly understood how we distinguish good bugs from bad bugs," said Tiffany Scharschmidt, MD, an associate professor in the Department of Dermatology at UCSF, member of the UCSF Benioff Center for Microbiome Medicine and UCSF Bakar ImmunoX Initiative, and principal investigator for the study, which was published online Nov. 26, 2019 in Cell Host & Microbe.

The skin is no mere wrapper; it's a full-fledged, multi-layered organ weighing several pounds that serves as a crucial physical barrier against life-threatening bacteria and other pathogens. In addition, cells of the immune system are abundant in skin and work together to recognize and attack microbes that may pose a threat.

Yet the immune system also has mechanisms in place to permit the development of a normal, healthy community of skin microbes. The skin microbiome comprises hundreds of different bacterial species and varies in composition between individuals and even between different parts of each person's skin. Many of these resident bacterial species are thought to serve helpful roles in skin health. For example, they make antibacterial molecules that serve as a chemical defense against more threatening species we might encounter -- say, on a dirty doorknob.

In an earlier study, Scharschmidt worked with Staphylococcus epidermidis, one of the most prevalent bacteria on healthy human skin. S. epidermidis is believed to be largely beneficial, but in rare situations, such as infection of implanted medical devices, it can act as a harmful pathogen.

That earlier work revealed that exposure to these healthy bacteria as a newborn led to immune tolerance: limiting skin inflammation upon subsequent encounters with this species. In contrast, delaying initial exposure to S. epidermidis until later in life resulted in a more inflammatory immune response to the same bacteria. The researchers found that this early window for tolerance was supported by a class of immune cells called regulatory T cells (Tregs), long known to play a role in maintaining tolerance to proteins from our own bodies and in preventing autoimmune diseases.

They found that Tregs were enriched in neonatal skin compared to adult skin, suggesting that the immune system could learn which bacterial species are "normal" and thus likely healthy based on which species Tregs encounter immediately after birth.

But this hypothesis presented a conundrum: If a newborn is exposed to pathogenic bacteria, would their immune systems be tricked into welcoming these dangerous invaders with open arms? "We wondered if this mechanism was an Achilles heel of the system that would also permit tolerance to pathogenic bacteria as a result of exposure during early life," Scharschmidt said -- a question that led to the new study.

Scharschmidt and her lab team now have found that early-life exposure to a multi-drug-resistant strain of Staphylococcus aureus -- the leading cause of skin infections in the U.S., a frequent aggravator of eczema, and a rare source of "flesh-eating" necrotizing fasciitis -- does not result in immune tolerance to the pathogen. The immune system is still able to respond vigorously upon later exposure to the same strain, they discovered.

"Rather than being merely immature, the immune system in early life has distinctive features and capacities, including the ability to accept commensal bacteria as part of a broader self," Scharschmidt said. "In this study we demonstrated that this tolerance is not indiscriminately extended to all bacteria encountered during this early window, but rather that the immune system very early on can distinguish commensal bacteria from pathogens, and make profoundly divergent responses with important long-term consequences."

So what accounted for the difference in early-life responses to the commensal versus the pathogenic bacterium? The researchers discovered that a specific toxin made by S. aureus plays a role in preventing tolerance and maintaining the immune system's vigilance.

Postdoctoral researcher John Leech, PhD, who conducted most of the experiments and is first author of the Cell Host & Microbe study, notes that S. aureus makes a slew of toxins that can destroy host tissues or disrupt normal immune responses. But he discovered that one specific molecule, called alpha toxin, allowed the immune system to recognize S. aureus as a threat during early-life skin exposure.

"Alpha toxin is the trigger that allows the immune system to say, 'You're not one of us,'" Leech said. "The immune system recognizes this pathogenic strain as one that is dangerous, and later in life it can still mount a robust immune response against it."

The researchers found that alpha toxin prevented tolerance by triggering immune cells in skin to take biochemical steps through an "alarmin pathway," leading to secretion of a molecule called IL-1 beta. This in turn resulted in a species-specific memory response involving fewer Tregs and instead more immune cells poised to defend against S. aureus in later life.

"I am hopeful that learning how the immune system appropriately recognizes and responds to good bugs versus bad bugs will help us better understand why certain individuals are particularly susceptible to infection, or how chronic inflammatory skin disorders are apparently exacerbated by the presence of normally well-tolerated bacteria," Scharschmidt said.

"It remains to be tested," she added, "but the types of immune responses we identified in this study are not unique to skin, and so I would think the same mechanisms of tolerance or lack of tolerance may hold for other body sites."