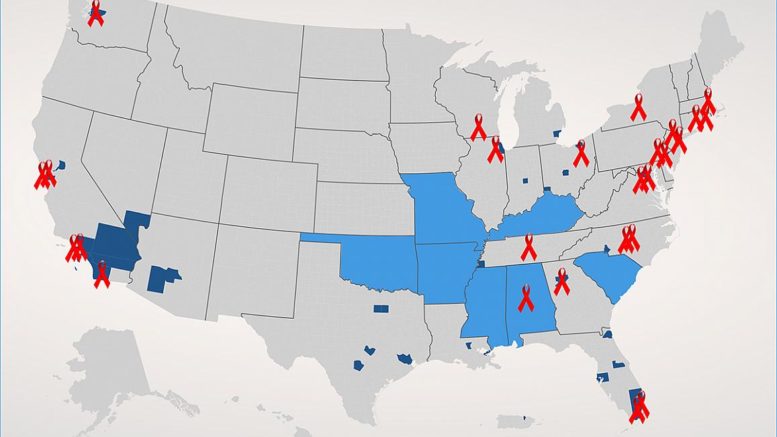 This map shows the 48 counties, plus Washington, D.C., and San Juan, Puerto Rico, where >50% of HIV diagnoses occurred in 2016 and 2017, and an additional seven states with a substantial number of HIV diagnoses in rural areas. The red ribbons mark the locations of Centers for AIDS Research and AIDS Research Centers, Courtesy of NIAID

The National Institutes of Health has awarded approximately $11.3 million to 23 institutions across the United States to collaborate with community partners to develop locally relevant plans for diagnosing, treating and preventing HIV in areas with high rates of new HIV cases.

The awards will help enhance the implementation science knowledge base needed for the proposed Ending the HIV Epidemic: A Plan for America. The plan aims to leverage the powerful data and tools now available to reduce new HIV diagnoses in the United States by 75 percent in five years and by 90 percent by 2030. President Donald J. Trump announced this bold new initiative during the State of the Union Address in February. If funds are appropriated by Congress, the 10-year initiative will begin in fiscal year 2020. The awards announced today are one-year awards to support pilot and formative studies to prepare for more extensive implementation science research proposals expected in 2020.

“With existing, powerful HIV treatment and prevention tools, we can end the epidemic in the United States,” said Anthony S. Fauci, MD, director of the National Institute of Allergy and Infectious Diseases (NIAID) at NIH. “The new initiative is a practical, achievable implementation plan. By working directly with health departments and other community organizations, researchers can find the best ways to use the highly effective methods at our disposal to diagnose, prevent and treat HIV in the United States.”

The one-year supplemental awards were made to 17 institutions that participate in the NIH-funded Centers for AIDS Research (CFAR) program. The nationwide network of CFARs supports multidisciplinary NIH-funded research aimed at reducing the burden of HIV domestically and globally. Awards also were made to six AIDS Research Centers (ARCs), an interdisciplinary mental health research program funded by the NIH National Institute of Mental Health (NIMH).

As part of the new effort, CFARs and ARCs will build on existing relationships with local health authorities, community-based groups and other U.S. Department of Health and Human Services (HHS) agencies involved in the Ending the HIV Epidemic initiative, including the Centers for Disease Control and Prevention and the Health Resources and Services Administration. With these partners, researchers will work to identify and evaluate strategies to diagnose new cases of HIV, help connect people living with HIV or at risk of HIV acquisition with medical care and HIV prevention services, and ensure they continue to receive care to treat or prevent HIV. With much of the needed research infrastructure already in place, the new effort is expected to yield critical findings with modest funding.

The new initiative will focus on implementing proven HIV treatment and prevention tools. These include daily antiretroviral therapy that suppresses HIV to undetectable levels, which benefits people living with HIV and prevents sexual transmission of the virus to others (Undetectable=Untransmittable, or U=U); pre-exposure prophylaxis (PrEP), a single pill that can reduce the risk of acquiring HIV by more than 95 percent when taken daily; and emergency post-exposure prophylaxis (PEP), which can prevent HIV infection if begun within three days of exposure and taken for an additional 28 days. Implementation strategies that demonstrate success in these initial research locations will be shared as best practices to inform efforts in other jurisdictions.

Most new HIV cases in the United States are concentrated in certain geographic areas. More than 50 percent of new HIV diagnoses in 2016 and 2017 occurred in 48 counties; Washington, D.C.; and San Juan, Puerto Rico. Additionally, seven states have a disproportionate occurrence of HIV in rural areas.

The 65 supplemental awards announced today will fund research in 36 of the 48 counties and five of the seven states with a high rural burden, as well as in Washington, D.C., and Puerto Rico. Within these geographic areas, the new research will investigate how to best deliver evidence-based interventions and services for populations that face a disproportionate risk of HIV, including Black and Latinx women and men, transgender women and youth aged 13-24 years.

Researchers will collaborate closely with local health officials and community groups to design and test implementation techniques that take local issues into account. The Ending the HIV Epidemic initiative will foster active partnerships with city, county and state public health departments; local and regional clinics and healthcare facilities; clinicians; providers of medication-assisted treatment for opioid use disorder; and community- and faith-based organizations. This community engagement is critical to developing the type of creative, local interventions that meet a community’s unique needs. Researchers and their community partners will examine local policies to identify structural and social barriers that hinder HIV prevention and treatment efforts and investigate methods to overcome these challenges.

“The rubber meets the road in communities,” said Dianne M. Rausch, PhD, director of the NIMH Division of AIDS Research. “Our partnerships with community and local health professionals are critical. All parties must gain value from this research to ultimately find success in ending the HIV epidemic in the United States.”

The CFARs are co-funded and managed by 13 Institutes and Centers and the Office of AIDS Research at NIH. The new supplements will be funded by the Minority HIV/AIDS Fund from the HHS Office of the Assistant Secretary, and by NIH.