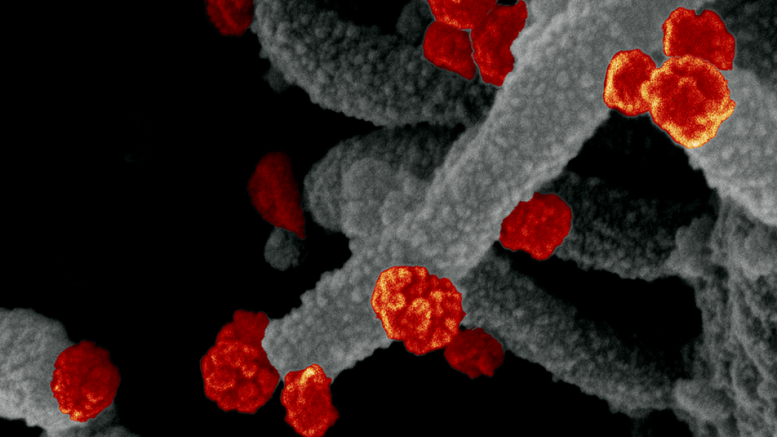 This scanning electron microscope image shows SARS-CoV-2 (round red particles) emerging from the surface of a cell cultured in the lab. SARS-CoV-2 is the virus that causes COVID-19. Courtesy of NIAID

National Institutes of Health scientists studying SARS-CoV-2, the virus that causes COVID-19, have defined in Syrian hamsters how different routes of virus exposure are linked to disease severity. Their study, published in Nature Communications, details the efficiency of airborne transmission between hamsters and examines how the virus replicates and causes disease throughout the respiratory system. Their work also shows that virus transmission via fomites—exposure from contaminated surface contact — is markedly less efficient than airborne transmission but does occur.

Scientists from NIH’s National Institute of Allergy and Infectious Diseases conducted the experiments at Rocky Mountain Laboratories in Hamilton, Mont.

To investigate how different routes of exposure affected disease development, the scientists exposed hamsters to SARS-CoV-2 via both aerosols and fomites. For aerosol exposure, the scientists used equipment that controlled the size of virus-loaded droplets. For fomite exposure, they placed a dish contaminated with SARS-CoV-2 in the animal cages.

The scientists found that aerosol exposure directly deposited SARS-CoV-2 deep into the lungs, whereas fomite exposure resulted in initial virus replication in the nose. Regardless of exposure route, animals had SARS-CoV-2 replicating in the lungs, but lung damage was more severe in aerosol-exposed animals compared to the fomite group.