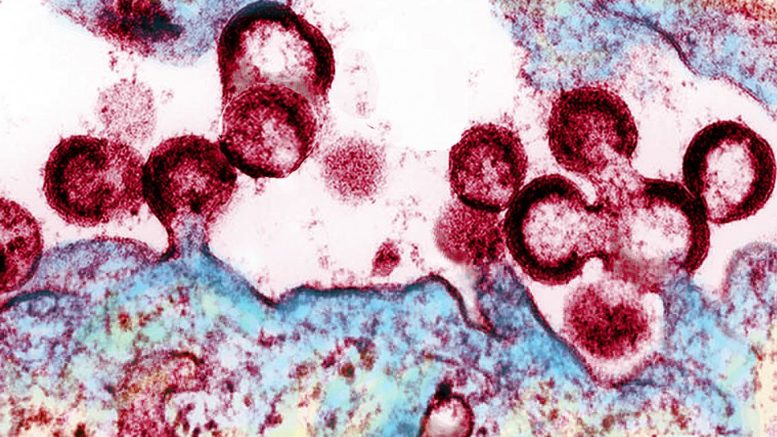 When a resting immune cell that is latently infected with HIV gets reactivated, the cell starts producing HIV virions (red) that bud and release from the cell (blue), as shown here. Courtesy of NIAID

In a range of experiments, scientists have reactivated resting immune cells that were latently infected with HIV or its monkey relative, SIV, in cells in the bloodstream and a variety of tissues in animals. As a result, the cells started making copies of the viruses, which could potentially be neutralized by anti-HIV drugs and the immune system. This advance, published today in two papers in the journal Nature, marks progress toward a widely accessible cure for HIV.

The new research was conducted by investigators from the Collaboratory of AIDS Researchers for Eradication (CARE) based at the University of North Carolina at Chapel Hill and from the Emory Consortium for Innovative AIDS Research (E-CIAR) in Nonhuman Primates, both funded by the National Institutes of Health. Scientists from ViiV Healthcare and Qura Therapeutics collaborated on the research. CARE is part of the Martin Delaney Collaboratories for HIV Cure Research, the flagship NIH-supported HIV cure research program. The joint efforts of scientists from a variety of specialties made the new findings possible.

“A simple, safe and scalable cure for HIV is an aspirational goal that, if achieved, would accelerate progress toward ending the HIV pandemic,” said Anthony S. Fauci, MD, director of the National Institute of Allergy and Infectious Diseases, part of NIH. “These new findings help sustain our cautious optimism that an HIV cure is possible.”

While consistent antiretroviral therapy (ART) maintains the health of people living with HIV and prevents transmission of the virus, it is not a cure. Developing an HIV cure has been extremely difficult due to the persistence of viral reservoirs, where the virus hides from the immune system. These reservoirs consist of HIV-infected cells containing HIV genetic material that can generate new virus particles if a person’s treatment is interrupted. The cells have entered a resting state that they maintain until they are activated to produce the virus. The immune system cannot recognize and kill HIV-infected cells in a resting state, and ART has no effect on them.

Consequently, scientists have been attempting to activate the HIV reservoir so therapeutic agents or an enhanced immune system can recognize and kill the infected cells, eliminating HIV. This strategy is often called “kick and kill.” Previous attempts to reactivate or “kick” the HIV reservoir worked well in the laboratory but were either ineffective or too toxic when tested in animals and people.

One of today’s reports describes the testing of a compound called AZD5582, which belongs to a class of molecules that have proven safe as experimental cancer therapeutics.

CARE scientists obtained 20 mice with human immune systems, infected the animals with HIV, and then gave them ART that suppressed the virus. Next, the scientists injected AZD5582 into 10 of the mice and a placebo into the other 10.

Within 48 hours, high levels of HIV RNA were detected in the blood of six of the AZD5582-treated mice. HIV RNA levels in resting immune cells of the bone marrow, thymic organoid, lymph node, spleen, liver and lung were up to 24-fold higher in the AZD5582-treated mice than in the controls. This indicated that AZD5582 had activated resting cells in the HIV reservoir throughout the treated mice. The compound did not cause toxicity in the mice or activate their immune systems.

The E-CIAR and CARE investigators also obtained 21 rhesus macaques, infected them with SIV and gave them suppressive ART. More than a year after the monkeys began ART, the scientists gave 12 of them weekly intravenous infusions of AZD5582 for either three or 10 weeks.

The level of SIV increased in the blood of five of the nine monkeys (55%) that received 10 doses of AZD5582 and in none of the three monkeys that received fewer doses. Thus, SIV levels increased in five of 12 monkeys (42%) overall, even as they remained on ART. SIV RNA levels in resting immune cells from the monkeys’ lymph nodes were significantly higher in animals treated with 10 doses of AZD5582 than in the nine monkeys that did not receive the compound. The investigators found AZD5582 treatment to be safe for most of the monkeys. The scientists did not detect a consistent reduction in the size of SIV reservoir in the AZD5582-treated monkeys, however, suggesting that it may be necessary to pair the compound with another agent to kill activated reservoir cells.

The researchers have begun additional animal studies to determine the best dose and timing of treatment and to be sure AZD5582 activates the reservoirs of many different HIV and SIV strains. It also will be important to test other compounds in the same class as AZD5582 to determine which might work best in humans, according to the scientists. If the results of these follow-up studies are successful, a preliminary clinical trial of treatment with AZD5582 or a related compound in people living with HIV may follow.

This study was led by J. Victor Garcia, PhD, Ann Chahroudi, MD, PhD, and Richard Dunham, PhD.  Garcia is director of the International Center for the Advancement of Translational Science, an Oliver Smithies Investigator and a professor of medicine, microbiology and immunology at University of North Carolina at Chapel Hill.  Chahroudi is an associate professor of pediatrics in the division of pediatric infectious diseases at Emory University School of Medicine and director of the Emory + Children's Center for Childhood Infections and Vaccines. Dunham is a director at ViiV Healthcare and an adjunct assistant professor at University of North Carolina at Chapel Hill.

The other new report published today describes how a combination of two agents strongly activated the SIV reservoir in ART-treated rhesus macaques and the HIV reservoir in ART-treated mice with human immune systems. One agent, an antibody called MT807R1, depletes the body of immune cells called CD8+ T cells. The other agent is an engineered protein complex called N-803, a more powerful version of a naturally occurring molecule that activates certain immune cells to fight pathogens.

E-CIAR scientists obtained 35 rhesus macaques, infected them with SIV and gave them ART, which suppressed the virus in 33 of the animals. At least a year after ART began, the scientists gave seven monkeys N-803 alone, 14 monkeys MT807R1 alone, and 14 monkeys both MT807R1 and N-803.

N-803 alone had no impact on the SIV reservoir. MT807R1 alone led to a moderate but significant increase in the level of SIV in the animals’ blood (their viral load). But the combination of MT807R1 plus N-803 led to a robust and persistent increase in the SIV viral load of all 14 animals — even the six in which fewer than three copies of SIV were detected before the experimental treatment began.

CARE scientists at UNC replicated these outcomes in 23 mice that had been given human immune systems, infected with HIV and given suppressive ART.

In addition, investigators demonstrated in cell culture that N-803 could reactivate human immune cells latently infected with HIV, but that adding CD8+ T cells to the culture suppressed the latency-reversing activity of N-803.

Taken together, the findings illustrate that CD8+ T cells play a role in maintaining the SIV reservoir in monkeys. The scientists hope to clarify exactly how CD8+ T cells do this so they can develop a latency-reversing strategy that does not require eliminating all CD8+ T cells and is thus gentler on the body.

This research was led by Guido Silvestri, MD, the Georgia Research Alliance Eminent Scholar in comparative pathology, professor and interim chair of the department of pathology and laboratory medicine at Emory University School of Medicine, and chief of the division of microbiology & immunology at Yerkes National Primate Research Center.