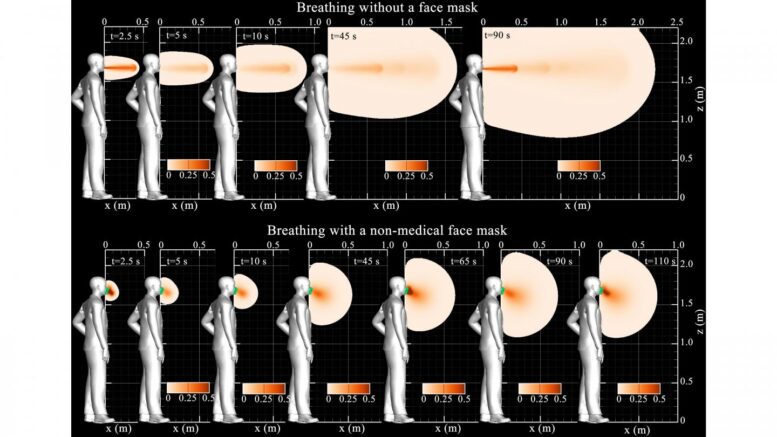 Instantaneous simulation results of saliva plume concentration contours (in volume fraction) during normal breathing shown on the sagittal plane. Top and bottom images show the case without and with a nonmedical face mask. Considering a threshold of 1 part per million, saliva concentrations below 10-6 are cut off. Courtesy of Ali Khosronejad

The World Health Organization and the Centers for Disease Control recommend keeping a certain distance between people to prevent the spread of COVID-19. These social distancing recommendations are estimated from a variety of studies, but further research about the precise mechanism of virus transport from one person to another is still needed.

In Physics of Fluids, researchers from Stony Brook University, Harvard, ETH Zurich, and Hanyang University demonstrate normal breathing indoors without a mask can transport saliva droplets capable of carrying virus particles to a distance of 2.2 meters, or 7.2 feet, in a matter of 90 seconds.

The use of a face mask significantly reduces the distance these droplets travel. After almost two minutes, the saliva droplets restricted by a mask had traveled only 0.72 meters, under 2.4 feet and well below the distance of 1.8 meters, or 6 feet, suggested by the CDC.

The study used computer simulations with a more realistic model for the situation of interest than those used in previous studies. Previous work considered aerosol transport after coughing or sneezing, while this study specifically looked at normal human breathing. A normal breath produces periodic jet flows that contain saliva droplets, but the velocity at which the jet travels is less than a tenth that of a cough or sneeze.

The investigators found even normal breathing produces a complex field of vortices that can move saliva droplets away from the person's mouth. The role of these vortices has not previously been understood.

This complex vorticity field can transport aerosol droplets over long distances. A face mask dissipates the kinetic energy of the jet produced by an exhaled breath, disrupting the vortices and limiting the movement of virus-laden droplets.

The investigators considered the effect of evaporation of the saliva droplets. In the case of no mask, they found the saliva droplets near the front of the plume of exhaled breath had partially evaporated, reaching a size of only one-tenth of a micron. In stagnant indoor air, droplets this size would not settle to the ground for days.

The use of a mask partially redirects the exhaled breath downward and significantly restricts forward movement of the plume, so the risk of suspended droplets remaining in the air is substantially reduced.

The paper, "A computational study of expiratory particle transport and vortex dynamics during breathing with and without face masks" is authored by Ali Khosronejad, Seokkoo Kang, Fabian Wermelinger, Petros Koumoutsakos and Fotis Sotiropoulos. The article appears in Physics of Fluids (DOI: 10.1063/5.0054204) and can be accessed at https://aip.scitation.org/doi/10.1063/5.0054204.