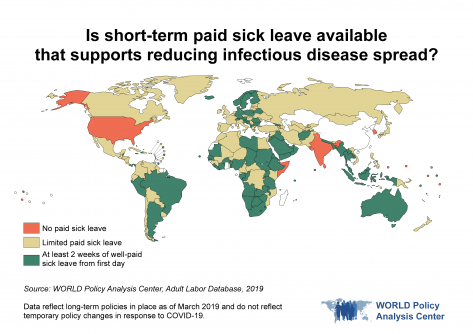 At a time when the world’s attention is focused on curbing the spread of infectious disease, new research by the UCLA WORLD Policy Analysis Center shows that strengthening guarantees of paid sick leave is crucial to protecting health and economic security around the globe.

To be published in the journal Global Public Health, the study found that almost every country (94%) mandates some form of paid sick leave at the national level. The United States is one of 11 countries that do not.

Yet, even in nations that guarantee paid time off for illness, the analysis showed critical gaps that undermined the ability of sick workers to follow public health advice and stay home from the very first day of illness. This was true in such countries as Italy and Iran — among the hardest hit in the early days of the COVID-19 pandemic, the study noted.

Rules that limit the duration of leave, set low rates of pay and exclude certain classes of employees put countries’ health and economic systems at risk, the study concluded. The global health emergency underscores the consequences.

“The cost of providing paid sick leave is modest compared to the cost of reining in a pandemic,” said Jody Heymann, founder of the WORLD Policy Analysis Center and a distinguished professor of public policy, public health, and medicine at UCLA.

“This is particularly true once the more rapid spread of disease caused by workers going to work sick is factored in,” said study co-author Amy Raub, principal research analyst at WORLD. She pointed to previous studies showing that ill employees are 1.5 times more likely to go to work when they lack strong paid leave guarantees.

Heymann and Raub led the research team that analyzed government policies in all 193 U.N. member states to answer an array of questions: When do paid sick leave benefits begin and how long do they last? What is the rate of pay? Are self-employed and part-time workers covered? Are there exemptions for small businesses? The findings are based on long-term policies in place as of March 2019 and do not reflect temporary policy changes in response to the outbreak of the novel coronavirus.

“The pandemic provides a stark illustration that expanding sick leave protections to the world’s workers is urgently needed,” Raub said.

Recognizing that their paid sick leave policies left them ill-equipped to combat COVID-19, countries around the world put stronger protections in place. However, Heymann said, “These temporary changes do not ensure that countries are prepared for the next pandemic.”

“In the last 20 years, the world has battled a series of acute health emergencies,” said Heymann, citing severe acute respiratory syndrome (SARS) in 2002, the H1N1 influenza virus in 2009, and Middle East respiratory syndrome (MERS) in 2012, among other outbreaks. “And new and dangerous respiratory diseases are bound to emerge.”

“Well-designed paid sick leave is critical to ensure workers stay home when sick to prevent the spread of COVID-19 and other infectious pathogens — both when the economy is open and during an economic shutdown,” Raub said.

The new study found strong sick-leave policies in place in both low-income and affluent countries. In key areas, the United States’ record lagged far behind:

The U.S. has no permanent national sick leave policy, although some state and local governments have adopted protections.
Even if the nationwide emergency paid sick leave act adopted amid the coronavirus outbreak were made permanent, the U.S. would be the only country to exclude workers from the benefits based solely on the size of the business they work for.
Beyond the United States, there are critical global gaps:

58% of countries do not explicitly guarantee paid sick leave to self-employed workers. This group makes up nearly half of the world’s work force, according to the United Nations’ International Labor Organization.
65% of countries — including 54% of high-income countries — do not explicitly guarantee paid sick leave to part-time workers. This gap disproportionately impacts women, who are more likely to be employed part time than men in nearly every country.
To conduct the study, the multilingual research team analyzed the full texts of labor and social security legislation, as well as other resources. For each of the 193 countries, source materials were read independently by two researchers, who then compared and reconciled their assessments.

Note to Editors: Maps illustrating key findings from this report are available for download here. Please direct questions to Erin Bresnahan, manager of new initiatives and strategic partnerships at the WORLD Policy Analysis Center, at ebresnahan@ph.ucla.edu.

The WORLD Policy Analysis Center at UCLA is a nonprofit policy research center that aims to improve the quantity and quality of globally comparative data on policies affecting human health, development, well-being and equity. With this data, WORLD informs policy debates and advances efforts to improve government transparency and accountability. The center’s founding director, Jody Heymann, is a distinguished professor at the Fielding School of Public Health, Luskin School of Public Affairs, and David Geffen School of Medicine. She is also dean emeritus of the Fielding School.

2 Comments on "Paid Sick Leave a Crucial Weapon During COVID-19 Era and Beyond, UCLA Study Finds"