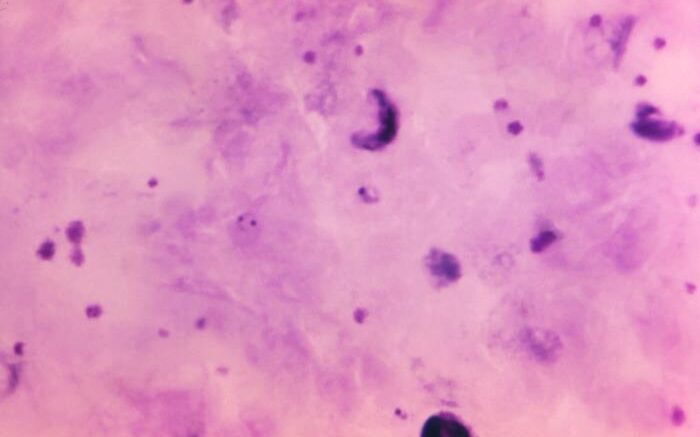 This photomicrograph of a Giemsa stained blood smear, revealed a number of Plasmodium falciparum parasites. Courtesy of CDC/Dr. Mae Mellvin

Malaria, a disease caused mainly by the parasites Plasmodium falciparum and Plasmodium vivax, (P. vivax) is associated with over 400,000 deaths each year. Previously, the spleen was assumed to mostly play a role in parasite destruction, as it eliminates malaria parasites after antimalarial treatment. A study published in the open access journal PLOS Medicine by Steven Kho and Nicholas Anstey at Menzies School of Health Research, Australia, and international colleagues, suggests that in chronic P. vivax infections, malaria parasites survive and replicate via a previously undetected lifecycle within the spleen.

A large biomass of intact asexual-stage malaria parasites accumulates in the spleen of asymptomatic human subjects infected with Plasmodium vivax (P. vivax). However, the mechanisms underlying this intense reaction are unknown. To better understand the accumulation of malaria parasites in the spleen, researchers examined the spleen tissue in twenty-two individuals naturally exposed to P. vivax and P. falciparum undergoing splenectomy in Papua, Indonesia between 2015-2017. The authors then analyzed the density of infection, parasites and immature red blood cells, as well as their distribution throughout the spleen.

The researchers found that the human spleen is a reservoir for immature red blood cells that are targeted by P. vivax for invasion, and that the examined spleens contained a substantial hidden biomass of malaria parasites, with densities hundreds to thousands of times higher than in circulating peripheral blood, suggesting an undetectable endosplenic lifecycle in asymptomatic P. vivax infections. The study had several limitations, such as the small sample size and asymptomatic status of all individuals included in the study. Future research should include acute, symptomatic malaria cases.

According to the authors, "Our findings provide a major contribution to the understanding of malaria biology and pathology and provide insight into P. vivax specific adaptations that have evolved to maximize survival and replication in the spleen".