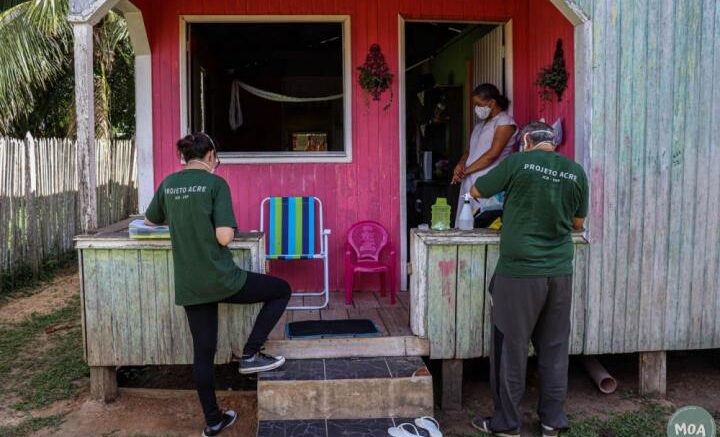 Members of the research team during a household survey in Mâncio Lima, Acre. Study suggests that people who have had dengue in the past are twice as likely to develop symptoms of COVID-19 if they are infected by the novel coronavirus. Courtesy of Bárbara Prado/ICB-USP

A study published in the journal Clinical Infectious Diseases suggests that people who have had dengue in the past are twice as likely to develop symptoms of COVID-19 if they are infected by the novel coronavirus.

The findings of the study were based on an analysis of blood samples from 1,285 inhabitants of Mâncio Lima, a small town in the state of Acre, part of Brazil’s Amazon region. The principal investigator was Marcelo Urbano Ferreira, a professor at the University of São Paulo’s Biomedical Sciences Institute (ICB-USP) in Brazil. The study was supported by FAPESP.

“Our results show that the populations most exposed to dengue, possibly owing to socio-demographic factors, are precisely those that most risk falling very sick if they’re infected by SARS-CoV-2. This is an example of what has been called a syndemic [synergic interaction between two epidemic diseases so that one exacerbates the effects of the other]. On one hand, COVID-19 has hindered efforts to control dengue. On the other, the latter appears to increase the risk for those who contract the former,” Ferreira told Agência FAPESP.

For seven years Ferreira has been conducting research in Mâncio Lima with the aim of combating malaria. In 2018 he began work on a project involving a survey of 20% of the town’s population every six months. His team call on homes, apply questionnaires, and collect blood samples. In early 2020 the project received additional funding from FAPESP so that part of the research effort could be redirected to the monitoring and characterization of SARS-CoV-2 in the region (read more at: agencia.fapesp.br/34728).

“In September 2020, a study by another group was published suggesting that areas with many cases of dengue were relatively little affected by COVID-19. Because we already had blood samples collected from inhabitants of Mâncio Lima before and after the first wave of the pandemic, we decided to use the material to test the hypothesis that prior infection by dengue virus conferred some degree of protection against SARS-CoV-2. What we found was exactly the opposite,” Ferreira said.

The blood samples analyzed had been collected in November 2019 and November 2020. They were submitted to tests capable of detecting antibodies against all four dengue serotypes and against SARS-CoV-2.

The results showed that 37% of the cohort studied had contracted dengue before November 2019 and 35% had been infected by the novel coronavirus before November 2020. Clinical data (symptoms and outcomes) of the volunteers diagnosed with COVID-19 were also analyzed.

“We deployed statistical analysis to conclude that prior infection by dengue virus doesn’t alter the risk of being infected by SARS-CoV-2. On the other hand, our study also shows that people who have had dengue are more likely to have symptoms if they’re infected by SARS-CoV-2,” said Vanessa Nicolete, first author of the article. Nicolete is a researcher with a postdoctoral fellowship at ICB-USP.

The causes of the phenomenon described in the article are unclear. There may be a biological basis for it, in the sense that antibodies against dengue virus somehow exacerbate COVID-19, or it may simply be due to socio-demographic factors that make certain population groups more vulnerable to both diseases for various reasons.

“The results evidence the importance of reinforcing both the social distancing measures introduced to contain the spread of SARS-CoV-2 and efforts to control the dengue vector, as the two epidemics are occurring at the same time and affecting the same vulnerable population. This should be getting more attention from the federal government,” Ferreira said.