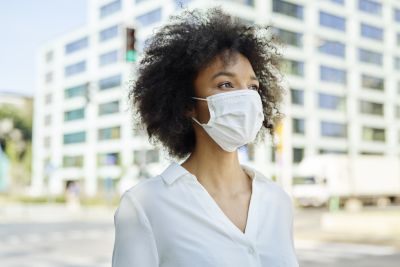 People's politics and values are exerting a bigger influence on how much of a threat they feel from COVID-19 compared to objective indicators such as the number of confirmed cases.

That's the finding of a new University of Cambridge survey which measured how attitudes to the coronavirus have varied over the course of 10 months of the pandemic for more than 6,000 UK residents.

Published today in the Journal of Risk Research, the results show that throughout 2020, UK inhabitants' perception of the risk from COVID-19 moved up and down as the pandemic waxed and waned.

However, what remained consistent was that beliefs and other psychological factors - rather than numbers of cases - had the greatest effect on the perceived risk, which in turn was associated with people's willingness to adopt protective health behaviors.

People with a lower perception of the risk of the virus included:

However, people with a higher trust in government and greater confidence in the country's actions to limit its spread, also had a lower risk perception of COVID-19.

People with a higher risk perception of the virus included:

On average, women were more concerned. Naturally, those who reported to have had an experience with the virus were also more worried about its risks too.

Of these factors, the three most important determinants were the extent to which people thought the government should intervene in society, their feelings of personal ability to stop the spread, and their tendencies to do things for the benefits of others. Trust in science ranked fourth and gender fifth.

Lead researchers, Dr. Claudia R. Schneider and professor Sander van der Linden, say the findings should impact upon how the UK public is communicated to about the risk of the coronavirus.

"Although risk communicators may be tempted to try to increase perception of the risk of COVID-19 as a means of ramping up greater protective behavior in the population, we caution that a fearful population is not necessarily a desirable endpoint. Risk is a feeling and changes over time - public perception may be underestimating or overestimating the actual risk at different times," explains Schneider, from the Winton Centre for Risk and Evidence Communication. "Risk communicators can benefit from these insights about the key factors that drive people's psychological reactions to the pandemic in their development of risk communication strategies."

The team at Cambridge surveyed UK occupants about their risk perception of the virus and the health protective measures they adopted, such as wearing face masks or social distancing.

The samples, taken in March, May, July and September 2020, and January 2021, were balanced for age, gender and ethnicity.

The researchers found that although risk perception varied over time, it was consistently and positively correlated with the adoption of health protective behaviors.

Such behaviors increased between March 2020 and January 2021, and the association between risk perception and behavior was stronger in January 2021 than in March and May 2020.

van der Linden, director of the Cambridge Social Decision-Making Lab, says, "Our results suggest that people's values, worldviews and sense of personal efficacy, play a larger role for risk perception compared to more 'objective' and cognitive factors, such as personal knowledge and COVID-19 case reports. Importantly, these conclusions remain robust over time for the UK."

Limitations of the research includes not being able to assess whether risk perception drives behavior or vice versa (or both) due to the correlational nature of the studies, and the team did not repeatedly survey the same individuals.

The authors stress the importance for future research to paint a more complete picture of why some people take up public health advice and others don't to help devise evidence-based communication strategies.