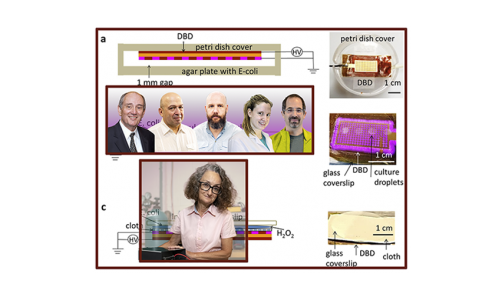 The COVID-19 pandemic has cast a harsh light on the urgent need for quick and easy techniques to sanitize and disinfect everyday high-touch objects such as doorknobs, pens, pencils, and personal protective gear worn to keep infections from spreading. Now scientists at the U.S. Department of Energy’s (DOE) Princeton Plasma Physics Laboratory and the New Jersey Institute of Technology (NJIT) have demonstrated the first flexible, hand-held, device based on low-temperature plasma — a gas that consists of atoms, molecules, and free-floating electrons and ions — that consumers can quickly and easily use to disinfect surfaces without special training.

Recent experiments show that the prototype, which operates at room temperature under normal atmospheric pressure, can eliminate 99.99 percent of the bacteria on surfaces, including textiles and metals in just 90 seconds. The device has shown a still-higher 99.9999 percent effectiveness when used with the antiseptic hydrogen peroxide. Scientists think it will be similarly effective against viruses. “We’re testing it right now with human viruses,” said PPPL physicist Sophia Gershman, first author of a paper in Scientific Reports that describes the device and the research behind it.

The positive results were welcome at PPPL, which is widening its fusion research and plasma science portfolios. "We are very excited to see plasmas used for a broader range of applications that could potentially improve human health," said Jon Menard, deputy director for research at PPPL.

The flexible hand-held device, called a dielectric barrier discharge (DBD), is built like a sandwich, Gershman said. “It’s a high-voltage slice of bread on cheese that is an insulator and a grounded piece of bread with holes in it,” she said.

The high-voltage slice of “bread” is an electrode made of copper tape. The other slice is a grounded electrode patterned with holes to let the plasma flow through. Between these slices lies the “cheese” of insulating tape. “Basically it’s all flexible tape like Scotch tape or duct tape,” Gershman said. “The ground electrode faces the users and makes the device safe to use.”

The room-temperature plasma interacts with air to produce what are called reactive oxygen and nitrogen species — molecules and atoms of the two elements — along with a mixture of electrons, currents, and electrical fields. The electrons and fields team up to enable the reactive species to penetrate and destroy bacteria cell walls and kill the cells.

Room-temperature plasmas, which compare with the fusion plasmas PPPL studies that are many times hotter than the core of the sun, are produced by sending short pulses of high-speed electrons through gases like air, creating the plasma and leaving no time for it to heat up. Such plasmas are also far cooler than the thousand-degree plasmas that the laboratory studies to synthesize nanoparticles and conduct other research.

A special feature of the device is its ability to improve the action of hydrogen peroxide, a common antiseptic cleanser. “We demonstrate faster disinfection than plasma or hydrogen peroxide alone in stable low power operation,” the authors write. “Hence, plasma activation of a low concentration hydrogen peroxide solution, using a hand-held flexible DBD device results in a dramatic improvement in disinfection.”

Achieving these results was a novel collaboration that brought together the plasma physics expertise of PPPL and the biological know-how of a laboratory at NJIT. “While we usually are a neurobiology lab that studies locomotion, we were eager to collaborate with PPPL on a project related to COVID-19,” said Gal Haspel, a professor of biological sciences at NJIT and a co-author of the paper.

Performing the plasma disinfection tests was co-author Maria Belen Harreguy, a graduate student in biological sciences at NJIT, with assistance from Gershman. “She did all the experiments and without her we wouldn’t have this study,” Gershman said.

The idea for this research began “as soon as we got into the COVID lockdown last March,” said PPPL physicist and co-author Yevgeny Raitses, who directs the Princeton Collaborative Temperature Plasma Research Facility (PCRF) — a joint venture of PPPL and Princeton University supported by the DOE Office of Science (FES) that provided resources for this work through a user project. “We at PCRF were thinking of how to help in fighting against COVID through our low-temperature plasma research, and it’s been exciting for us to continue this collaboration,” he said.

Raitses guided the PPPL side of the project, which included setting up the DBD based on a printed surface design and characterizing the plasma discharge in this device, and oversaw the ongoing collaboration with NJIT. Going forward, he said, “we are working to get access to a facility in which we will be able to apply the DBD and other relevant devices against the SARS CoV-2 virus” that causes COVID-19. "Also under way is research with immunologists and virologists at Princeton University and Rutgers University to expand the applicability of developed plasma devices to a broader range of viruses."

Co-authors of the paper include Shurik Yatom, who introduced the flex DBD idea and conducted physics research, and physicist Phillip Efthimion, who heads the PPPL Plasma Science & Technology Department and oversees the PCRF. Efthmion proposed combining hydrogen peroxide with plasma, which allowed boosting the disinfection properties of the plasma device.