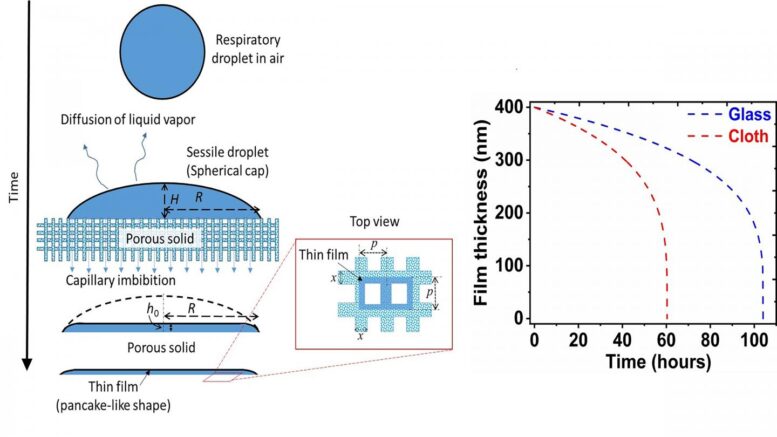 Researchers show a droplet remains liquid for a much shorter time on a porous surface, making it less favorable to survival of the virus. Left: Schematic of capillary imbibition and thin-film formation on porous surfaces; right: a comparative picture depicting the time varying film thickness on glass (an impermeable material) and paper (a porous material) in the context of coronavirus survival. Courtesy of S. Chatterjee, J. S. Murallidharan, A. Agrawal, and R. Bhardwaj

As COVID-19 spreads via respiratory droplets, researchers have become increasingly interested in the drying of droplets on impermeable and porous surfaces. Surfaces that accelerate evaporation can decelerate the spread of the COVID-19 virus.

In Physics of Fluids, researchers from IIT Bombay show a droplet remains liquid for a much shorter time on a porous surface, making it less favorable to survival of the virus.

The researchers found the coronavirus can survive for four days on glass, seven days on plastic, and seven days on stainless steel. But on paper and cloth, the virus survived for only three hours and two days, respectively.

"Based on our study, we recommend that furniture in hospitals and offices, made of impermeable material, such as glass, stainless steel, or laminated wood, be covered with porous material, such as cloth, to reduce the risk of infection upon touch," said author Sanghamitro Chatterjee.

Similarly, the researchers suggest seats in public places, such as parks, shopping malls, restaurants, and railway or airport waiting halls, could be covered with cloth to alleviate the risk of disease spread.

For both impermeable and porous surfaces, 99.9% of the droplet's liquid content is evaporated within the first few minutes. After this initial state, a microscopic thin residual liquid film remains on the exposed solid parts, where the virus can still survive.

The researchers discovered the evaporation of this remnant thin film is much faster in the case of porous surfaces as compared to impermeable surfaces. The droplets spread due to capillary action between the liquid near the contact line and the horizontally oriented fibers on the porous surface and the void spaces in porous materials, which accelerates evaporation.

"The fact that just the geometric features rather than the chemical details of the porous material make the thin-film lifetime significantly less was surprising," said Rajneesh Bhardwaj.

Specific findings, such as the droplet's liquid phase lifetime of approximately six hours on paper, will be particularly relevant in certain contexts, like schools. While this timescale is shorter than that of any permeable material (e.g., glass with a liquid phase lifetime of approximately four days), it would impact the exchange of notebooks, for example, as policymakers evaluate safe measures for reopening schools or the exchange of currency note transactions in retail banks.

Similarly, cardboard boxes, used commonly by e-commerce companies around the world, could be deemed relatively safe, since they would inhibit the virus survival.

The article "Why coronavirus survives longer on impermeable than porous surfaces" is authored by Sanghamitro Chatterjee, Janani Srree Murallidharan, Amit Agrawal, and Rajneesh Bhardwaj. The article will appear in Physics of Fluids on Feb. 9, 2021 at https://aip.scitation.org/doi/10.1063/5.0037924.

1 Comment on "Porous Materials are Unfavorable for Coronavirus Survival"