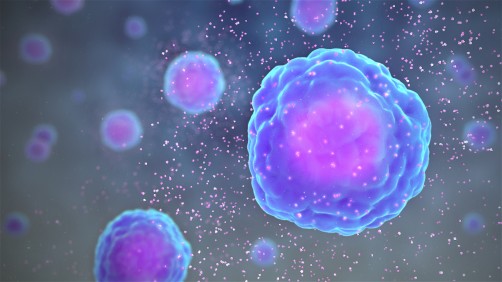 Scientists are still figuring out how COVID-19 affects the human body. This chart lays out one proposed path by which infection might escalate to a cytokine storm, with symptoms that can include acute respiratory distress syndrome (ARDS) and, in severe cases, organ failure and death. Illustration coutrtesy of J.T. Vogelstein et al./ arXive.org 2020

For some COVID-19 patients, the body’s immune response may be as destructive as the virus that causes the disease. The persistent high fevers, severe respiratory distress, and lung damage seen in some critically ill patients are all signs of an immune system in overdrive.

Now, a new clinical trial will test a treatment that targets this overactive immune response, says Howard Hughes Medical Investigator Bert Vogelstein. He and his team at the Johns Hopkins University School of Medicine are currently recruiting individuals for the trial, which includes patients ages 45 to 85 at the Johns Hopkins Hospital who have COVID-19 but who aren’t on a ventilator or in the ICU.

Their treatment, a common type of prescription drug called an alpha blocker, might break a cycle of hyper inflammation before it ramps up, their findings from mouse studies and a recent analysis of medical claims data suggest.

“The approach we’re advocating involves treating people who are at high risk early in the course of the disease, when you know they’re infected but before they have severe symptoms,” says Vogelstein. If the trial’s results suggest the drug is safe and effective against COVID-19, it could potentially help many people recover safely at home and lessen the strain on hospital resources, he says.

When macrophages (and some other kinds of immune cells) detect virus particles, they send out alert messages by releasing various proteins known as cytokines. Those cytokines recruit other immune cells to the scene – an inflammatory response that, in moderation, helps the body fight off a virus. But macrophages can also release other signaling molecules, called catecholamines, that amplify this response further, triggering the release of more cytokines. The result is a runaway feedback loop, like a snowball getting bigger as it barrels down a hill.

“It seems that once this process starts, there’s this inability to properly switch it off,” says Maximilian Konig, a rheumatologist at Hopkins who is helping to coordinate the trial.

Before COVID-19 hit, Vogelstein’s team was already exploring ways to ease the hyperinflammatory immune response in cancer patients treated with immunotherapy. The researchers were interested in drugs called alpha blockers, which are widely prescribed for prostate conditions and high blood pressure – and also interfere with the cell signaling that triggers cytokine storms. In theory, alpha blockers might stop a cytokine storm before it starts.

Giving mice with bacterial infections an alpha blocker lessened cytokine storms and decreased deaths, Vogelstein’s team reported in the journal Nature in 2018. And, the researchers found, the treatment didn’t seem to harm other aspects of the immune response.

As the COVID-19 pandemic escalated in the United States over the past few months and severely ill patients presented with cytokine storm symptoms, the idea of testing alpha blockers in humans has become more urgent, Vogelstein’s team recently argued in the Journal of Clinical Investigation.

To obtain approval for an alpha blocker clinical trial, Vogelstein’s team first surveyed medical claims data. They combed through records from people hospitalized for pneumonia and acute respiratory distress and analyzed whether patients’ outcomes were better if they had been taking alpha blockers for unrelated conditions. The team’s tentative conclusion: taking alpha blocker drugs correlated to a lower risk of death from respiratory distress. Those findings haven’t yet been peer reviewed, but they were reported April 21, 2020, in a preprint posted to arRxiv.org.

On its own, that’s not strong enough evidence to prescribe the drug for a wholly new disease like COVID-19, says Susan Athey, an economist at Stanford University who collaborated with Vogelstein’s team on the claims analysis. But it helps bolster the case for the team’s clinical trial.

In the trial, COVID-19 patients will take gradually increasing doses of an alpha blocker called prazosin, sold under the brand name Minipress, over six days, says Chetan Bettegowda, a neurosurgeon at Hopkins who is helping to design and run the trials. Then, the team will evaluate whether people who received this treatment had a lower ICU admission rate or ventilator use than patients who received the standard treatment. They’ll follow each patient for 60 days, but preliminary data from the first patients could be available within weeks to months, Bettegowda says.

If the trial’s results suggest alpha blockers are safe and effective, the team hopes to run a second trial with patients who have been diagnosed with COVID-19 but are not yet hospitalized. They’re also encouraging colleagues at other hospitals to join their clinical trial efforts, to gather patient data more quickly.

This treatment, if it works, would be a secondary form of prevention, Vogelstein says, mitigating symptoms before they become severe, rather than stopping infection in the first place. “Eventually, hopefully, a vaccine will be produced, and that will be the essence of prevention,” he says. “But until vaccines are available, secondary prevention makes a lot of sense.”