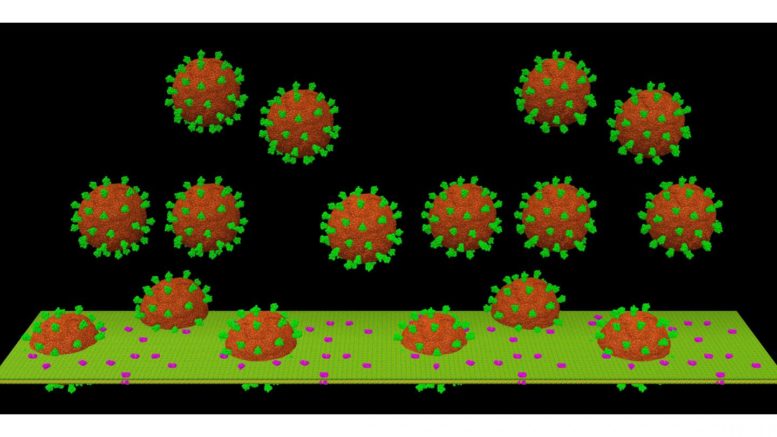 Structural model of SARS-CoV-2 infection. This structural model was built with UCSF Chimera using high-performance computers (Bridges Large and Frontera). The model shows 16 viruses, with the spike proteins shown in green (PDB ID: 6VSB) and an actual lipid bilayer membrane, with ACE2 dimers shown in magenta. All these structures are at atomic resolution. The length of the membrane is approximately 1 micrometer. Courtesy of Victor Padilla-Sanchez, The Catholic University of America.

With millions of COVID-19 cases reported across the globe, people are turning to antibody tests to find out whether they have been exposed to the coronavirus that causes the disease. But what are antibodies? Why are they important? If we have them, are we immune to COVID-19? And if not, why not?

"Antibodies are important because they prevent infection and heal patients affected by diseases," said Victor Padilla-Sanchez, a researcher at The Catholic University of America in Washington D.C. "If we have antibodies, we are immune to disease, as long as they are in your system, you are protected. If you don't have antibodies, then infection proceeds and the pandemic continues."

This form of foreign-antibody-based protection is called passive immunity -- short-term immunity provided when a person is given antibodies to a disease rather than producing these antibodies through their own immune system.

"We're at the initial steps of this now, and this is where I'm hoping my work might help," Padilla-Sanchez said. Padilla-Sanchez specializes in viruses. Specifically, he uses computer models to understand the structure of viruses on the molecular level and uses this information to try to figure out how the virus functions.

Severe acute respiratory syndrome (SARS) was the first new infectious disease identified in the 21st century. This respiratory illness originated in the Guangdong province of China in November 2002. The World Health Organization identified this new coronavirus (SARS-CoV) as the agent that caused the outbreak.

Now we're in the middle of yet another new coronavirus (SARS-CoV-2), which emerged in Wuhan, China in 2019. COVID-19, the disease caused by SARS-CoV-2, has become a rapidly spreading pandemic that has reached most countries in the world. As of July 2020, COVID-19 has infected more than 15.5 million people worldwide with more than 630,000 deaths.

To date, there are not any vaccines or therapeutics to fight the illness.

Since both illnesses (SARS-CoV and SARS-CoV-2) share the same spike protein, the entry key that allows the virus into the human cells, Padilla-Sanchez's idea was to take the antibodies found in the first outbreak in 2002 -- 80R and m396 -- and reengineer them to fit the current COVID-19 virus.

A June 2020 study in the online journal, Research Ideas and Outcomes, describes efforts by Padilla-Sanchez to unravel this problem using computer simulation. He discovered that sequence differences prevent 80R and m396 from binding to COVID-19.

"Understanding why 80R and m396 did not bind to the SARS-CoV-2 spike protein could pave the way to engineering new antibodies that are effective," Padilla-Sanchez said. "Mutated versions of the 80r and m396 antibodies can be produced and administered as a therapeutic to fight the disease and prevent infection."

His docking experiments showed that amino acid substitutions in 80R and m396 should increase binding interactions between the antibodies and SARS-CoV-2, providing new antibodies to neutralize the virus.

For his research, Padilla-Sanchez relied on supercomputing resources allocated through the Extreme Science and Engineering Discovery Environment (XSEDE). XSEDE is a single virtual system funded by the National Science Foundation used by scientists to interactively share computing resources, data, and expertise.

"XSEDE resources were essential to this research," Padilla-Sanchez said.

He ran the docking experiments on Stampede2 using the Rosetta software suite, which includes algorithms for computational modeling and analysis of protein structures. The software virtually binds the proteins then provides a score for each binding experiment. "If you find a good docking position, then you can recommend that this new, mutated antibody should go to production."

TACC's Frontera supercomputer, the 8th most powerful supercomputer in the world and the fastest supercomputer on a university campus, also provided vital help to Padilla-Sanchez. He used the Chimera software on Frontera to generate extremely high-resolution visualizations. From there, he transferred the work to Bridges because of its large memory nodes.

"Frontera has great performance when importing a lot of big data. We're usually able to look at just protein interactions, but with Frontera and Bridges, we were able to study full infection processes in the computer," he said. Padilla-Sanchez's findings will be tested in a wet lab. Upon successful completion of that stage, his work can proceed to human trials.

Currently, various labs across the world are already testing vaccines.

"If we don't find a vaccine in the near term we still have passive immunity, which can prevent infection for several months as long as you have the antibodies," Padilla-Sanchez said. "Of course, a vaccine is the best outcome. However, passive immunity may be a fast track in providing relief for the pandemic."

4 Comments on "Re-Engineering Antibodies for COVID-19"