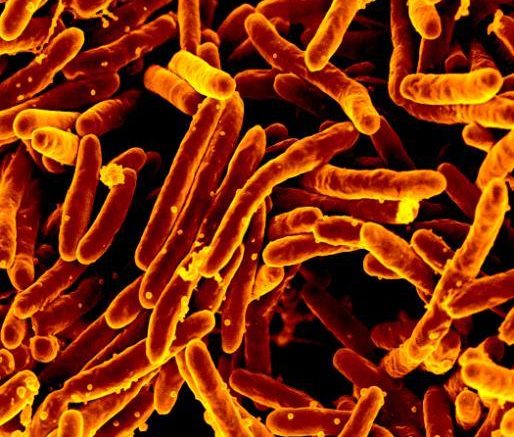 This is a scanning electron micrograph of Mycobacterium tuberculosis bacteria, which cause TB. Courtesy of NIAID

In September 2018, the National Institute of Allergy and Infectious Diseases (NIAID), part of the NIH, issued its Strategic Plan for Tuberculosis Research, which outlined research priorities to reduce and ultimately end the burden of tuberculosis (TB). TB is a bacterial disease that has claimed the lives of more than a billion people in the past two centuries. Now, a new "Perspective" in The Journal of Infectious Diseases by NIAID director Anthony S. Fauci, MD, and other Institute officials summarizes recent progress in improved TB diagnostics, therapeutic regimens and prevention approaches that made 2019 a "banner year" for TB research.

Therapeutics trials described by the NIAID authors include BRIEF TB/A5279, a Phase 3 clinical study demonstrating that a one-month course of two antibiotic drugs worked as well as a nine-month regimen of a single drug to prevent TB disease among adults and adolescents with HIV at risk of developing active TB. In June 2019, NIAID and the Eunice Kennedy Shriver National Institute of Child Health and Human Development, also part of NIH, launched the Phase 3 PHOENIx MDR-TB trial in 12 countries. PHOENIx MDR-TB (Protecting Households on Exposure to Newly Diagnosed Index Multidrug-Resistant Tuberculosis Patients) will compare two oral regimens for preventing active TB in adults, teens and children who are at high risk of infection because they live with adults who have multidrug-resistant TB.

"Results from this innovative study will inform new TB prevention guidelines to avert the pain, disability and death associated with MDR-TB," Fauci and his coauthors write.

Advances in TB vaccine development in 2019 included exciting preclinical and clinical results from several studies, the Perspective authors write. A study in macaques, in which the Bacille Calmette-Guerin (BCG) vaccine--the world's only licensed TB vaccine--was administered intravenously (IV) instead of by the standard intradermal route resulted in a dramatic increase in efficacy. The findings support further investigation of IV BCG administration in future human clinical trials. The authors described results of a Phase 2b trial of a candidate TB vaccine M72/AS01 (developed by GlaxoSmithKline) as "groundbreaking." The trial enrolled 3,575 volunteers in three countries and demonstrated 50% efficacy in preventing development of active pulmonary TB compared with placebo.

The challenge in 2020 and beyond is to build on the momentum generated by these recent accomplishments, the authors note. Still urgently needed are rapid, inexpensive and accurate point-of-care diagnostics; new and more effective drugs; and new and improved vaccines that prevent transition from latent infection to active TB disease or that prevent infection altogether. Achieving the end of TB within a generation is possible only through concerted, collective and collaborative efforts that involve government, academia, industry and civil society at all levels, the authors conclude.