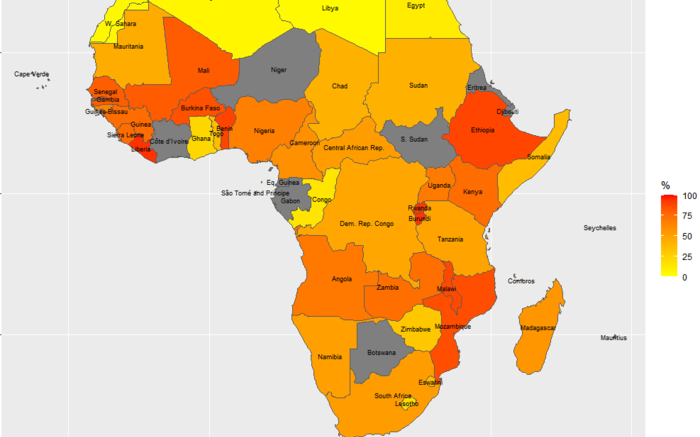 Map of Africa showing areas which lack soap. Courtesy of University of Bristol

Millions of people across the African continent are at risk of contracting COVID-19 because of a lack of the most basic public health tools to protect themselves, including the essentials of soap and water.

These measures – known as non-pharmacological public health interventions (NPIs), and including physical distancing or isolation at home to prevent transmission – are among the simplest and least expensive methods to slow the spread of SARS-CoV-2, the virus that causes COVID-19. Yet huge numbers of Africa’s roughly 1.4 billion people do not have access to these tools, researchers said.

“Hundreds of millions of people across Africa simply lack means for implementing NPIs to prevent SARS-CoV-2 transmission,” said Dr. Timothy Brewer, UCLA Fielding School of Public Health professor of epidemiology and professor of medicine, and a member of the Division of Infectious Diseases, at the David Geffen School of Medicine at UCLA. “These populations urgently need to be prioritized for vaccination to prevent disease and to contain the global pandemic.”

The findings – published this month in the peer-reviewed journal Epidemiology & Infection, as “Housing, sanitation and living conditions affecting SARS-CoV-2 prevention interventions in 54 African countries” –are from an international team, led by Brewer and colleagues at the University of Bristol, and including researchers in China, Ethiopia, Mexico, South Africa, Spain, Sweden, the United Kingdom, and the U.S.

As of now, COVID-19, caused by severe acute respiratory syndrome coronavirus 2 (SARS-CoV-2), has resulted in some 7.3 million cases and 185,505 deaths across the continent. Globally, nearly 210 million cases and 4.4 million deaths have been reported in more than 200 countries, although total mortality due to COVID-19 may be as high as 7 million deaths. The global COVID-19 case fatality ratio approximates that of the 1918 H1N1 Influenza pandemic.

“SARS-CoV-2 spreads primarily by respiratory droplets generated by coughing, sneezing or talking,” Brewer said. “Until effective vaccines are universally available, NPIs are the principal means by which governments prevent SARS-CoV-2 transmission in their populations.”

In addition to isolation of those infected and contact tracing and quarantine for those exposed, the World Health Organization (WHO) recommends physical distancing, masking in public places and hand washing as important NPIs that countries should employ for COVID-19 prevention and control. Laboratory-based and observational studies suggest that physical distancing and the wearing of face masks may reduce SARS-CoV-2 transmission by at least 80%.

“These findings illustrate the substantial barriers many African households face in keeping safe from SARS-CoV-2 infection because of living conditions that preclude their ability to quarantine, isolate or maintain physical distancing and because of substantial obstacles to handwashing,” said Dr. Jody Heymann, a UCLA distinguished professor of public health, public policy, and medicine who serves as director of the Fielding School's WORLD Policy Analysis Center (WORLD). “Crucially, the findings raise the urgency of getting vaccines rapidly to all countries in Africa, which lag far behind, and for addressing the underlying conditions of poverty that place populations at increased risk from respiratory virus outbreaks and pandemics.”

“The pandemic has exposed structural inequalities in almost all spheres, from health to the economy, security to social protection,” said study co-author Yehualashet Mekonen, director of the African Child Observatory Program at the African Child Policy Forum (ACPF). “Girls in the continent have particularly felt its impact with far reaching consequences on their life trajectories including higher risks for early marriage, drop out from school and reduced access to reproductive health services.”

The researchers also made the point that despite the structural and resource issues faced by governments in Africa, some nation’s responses to COVID have been among the best in the world.

“Unfortunately, impoverished living conditions mean that it is almost impossible for many people in African countries to follow public health advice and protect themselves from the virus,” said co-author Dr. David Gordon, with the University of Bristol in the United Kingdom. “European and North American countries need to stop hoarding millions of doses of vaccines that they will never be able to use and make them available to people in Africa.”