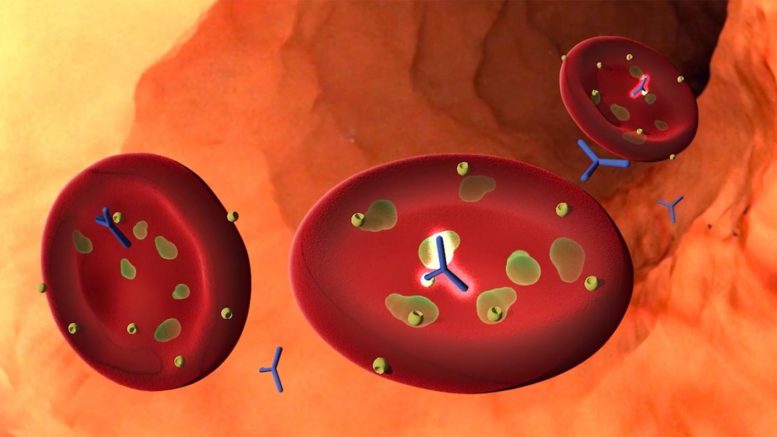 A new study identifies an antibody, often present in children with natural immunity to severe malaria, that attacks a particular malaria protein called pGARP. When the antibody binds the protein, it causes malaria cells to undergo a form of programmed cell death. The discovery could be the basis for a new malaria vaccine. Courtesy of Kurtis Lab/Big Ocean

Researchers have discovered a promising new strategy for combating malaria, a mosquito-borne parasite that claims nearly a half-million lives each year.

For a study reported in the journal Nature, researchers screened blood samples from children who had natural immune resistance to severe malaria infection. The study identified an antibody to a particular malaria protein, called PfGARP, that appears to protect resistant children from severe disease. Lab tests showed that antibodies to PfGARP seem to activate a malarial self-destruct mechanism, causing parasite cells living inside human red blood cells to undergo a form of programmed cell death.

"We demonstrated in two independent studies in nonhuman primates that vaccination with PfGARP protects against a lethal malaria parasite," said study senior author Dr. Jonathan Kurtis, a professor at the Warren Alpert Medical School of Brown University and laboratory director of the Center for International Health Research at Rhode Island Hospital. "What's exciting is that this is a vaccination strategy that attacks malaria in a way that it has never been attacked before -- one in which the parasite becomes complicit in its own demise. We are hopeful that this vaccine, perhaps combined with other malarial antigens, will translate into a strategy that can help prevent severe malaria in people."

Testing of a human vaccine is likely years away, the researchers say, and there's no way to be certain it will work. But the team is hopeful that the approach taken in this study, which looks for the factors that contribute to naturally occurring disease resistance, will prove effective where other approaches have not.

The results described in this new paper were nearly 20 years in the making, beginning with epidemiological research led by Michal Fried and Patrick Duffy of the National Institutes of Health. Starting around 2001, they began recruiting cohorts of children in Tanzania. The kids were enrolled at birth and followed for years to see who among them developed an acquired immune response to malaria.

"There was a ton of hard epidemiological work that went into simply identifying which kids were resistant and which weren't," Kurtis said. "Only after we knew their resistance levels could we use this information to identify the parasite targets that were recognized by antibodies made only by the resistant kids but not by the susceptible kids."

For this latest research, the team selected 12 resistant and 14 susceptible children from the Tanzanian cohort. The researchers looked at blood samples taken from the children around age two, when naturally acquired immunity seems to develop. Using a sophisticated method to introduce malaria proteins to each blood sample one by one, the researchers could look for any antibodies to a particular protein that were present in the resistant samples and not in the susceptible samples. That work identified PfGARP as a potential factor in conferring resistance.

Having identified PfGARP, the researchers then examined whether antibody responses to PfGARP were associated with resistance in a larger sample of 246 children. They found that children without anti-PfGARP antibodies were at 2.5 times higher risk of severe malaria compared to those who had the antibody.

The next step was trying to understand how anti-PfGARP antibodies affect the parasite. A series of laboratory experiments showed that the PfGARP protein is produced by malarial trophozoite cells, which live and feed off of nutrients inside red blood cells. The protein is then transported to the outer membrane of the red blood cell, where it makes the parasite cell vulnerable to the antibody.

"It's a kill switch," Kurtis said. "When the antibody binds to the protein, it sends a signal that tells the trophozoite to shrivel up and die. When we introduce the antibody to samples in petri dishes, we end up with 98% or 99% dead parasites."

The activity of the protein begs the question of why an organism would evolve such a self-destruct mechanism. Kurtis thinks it might have evolved as a means of sensing when the parasite's host is in distress.

"It's not necessarily in a parasite's best interest to kill its host," Kurtis said. "Keeping the host infected but alive means more chances for the parasite to reproduce. So what this might be is a means of sensing a host in distress and then reducing parasite load accordingly."

The anti-PfGARP antibody hijacks that evolved system and turns it against the parasite.

Having shown that PfGARP antibodies kill the parasite, the researchers developed two types of PfGARP vaccines. Both of those were shown to be protective in nonhuman primates exposed to a human form of malaria.

Previous efforts to develop vaccines against malaria have met with limited success. But the researchers involved in this latest work say there's reason to believe this new strategy may succeed where others have failed. That's because it attacks the parasite at a different point in the infection cycle from other vaccines.

When an infected mosquito bites someone, it injects thread-like cells called sporozoites, which travel through the bloodstream to the liver. There, the parasite morphs into a different type of cell called merozoites that exit the liver in large quantities to infect red blood cells. Once they've invaded red blood cells, the parasites morph again into trophozoites, which feed off of the nutrients inside the cell before they burst out to start the cycle again.

An existing vaccine that targets the first stage -- aiming to prevent infection of the liver -- has had limited success. That's partly, Kurtis says, because the time window to intervene is so small.

"It takes five minutes for the parasite to go from the mosquito to the liver," he said. "Because it's so quick, the amount of antibody needed to stop it is huge. And if just one sporozoite gets in, you've got malaria."

This new vaccine targets the trophozoite stage, which lasts up to a day, Kurtis says. The researchers are hopeful that the longer window for intervention will reduce the amount of antibody needed to kill the parasite, and thereby make for a more effective vaccine.

"This gives us 24 hours as opposed to 5 minutes to intervene," Kurtis said. "During that time, the parasite expresses PfGARP -- a kill switch. We have designed a vaccine that activates it."

The researchers plan to continue testing different versions of the vaccine in animal models and ultimately to begin human trials in the coming years.

"This was an incredible team effort involving infectious disease experts, pathologists, epidemiologists, geneticists and molecular biologists," Kurtis said. "It really took all of these people to make this possible, and we're hopeful that the end result will be a vaccine that can save lives."