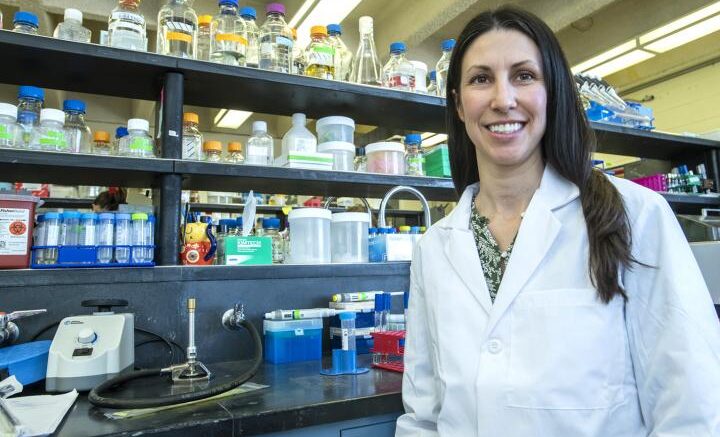 University of Montana researchers and their partners have discovered a slimy strategy used by bacteria to defeat antibiotics and other drugs used to combat infections afflicting people with cystic fibrosis. The research was published Feb. 23 in the journal Cell Reports.

Cystic fibrosis is a life-threatening disease that causes persistent lung infections and limits a person's ability to breathe over time. A common strain of bacteria, Pseudomonas aeruginosa, often thrives in the lungs of people with cystic fibrosis, as well as in wounds from burns or diabetic ulcers. Once a P. aeruginosa infection is established, it can be incredibly difficult to cure, despite repeated courses of antibiotics.

Dr. Laura Jennings, a research assistant professor in UM's Division of Biological Sciences and an affiliate with the University's Center for Translational Medicine, said their research showed that the stubborn germs living in the lungs of cystic fibrosis patients create a self-produced carbohydrate slime. And this slime makes the bacteria more resistant to the antibiotics prescribed by doctors, as well as drugs that reduce the thickness of mucus.

"We found the first direct evidence that these carbohydrates are produced at the sites of infection," Jennings said. "We showed that one of the carbohydrates, called Pel, sticks to extracellular DNA, which is abundant in the thick mucus secretions prominent in cystic fibrosis lungs.

"This interaction makes a slimy protective layer around the bacteria, making them harder to kill," she said. "As such, it reduces the pathogen's susceptibility to antibiotics and drugs aimed at reducing the thickness of airway mucus by digesting DNA."

She said the work supports a hypothesis that it's the carbohydrates that group, or aggregate, the bacteria in cystic fibrosis lungs.

"This is important because we know that physically breaking up bacterial aggregates can restore bacterial susceptibility to killing with antibiotics and cells of the immune system," Jennings said. "Therefore, understanding the mechanisms that promote bacterial aggregation may facilitate new therapeutic approaches aimed at digesting the carbohydrates holding bacterial cells together."

The research also suggests that the carbohydrate Pel likely diminishes the efficacy of the most commonly used therapeutics for cystic fibrosis, which are inhaled antibiotics and a drug that breaks down the thickness of the airway mucus, making it easier to cough up.

The paper in Cell Reports is titled "P. aeruginosa aggregates in cystic-fibrosis sputum produce exopolysaccharides that likely impede current therapies." Dr. Matthew Parsek from the University of Washington is the senior author. Jennings is the lead author and a former postdoctoral fellow in Parsek's laboratory. Other authors are from UW, UM and The Ohio State University.