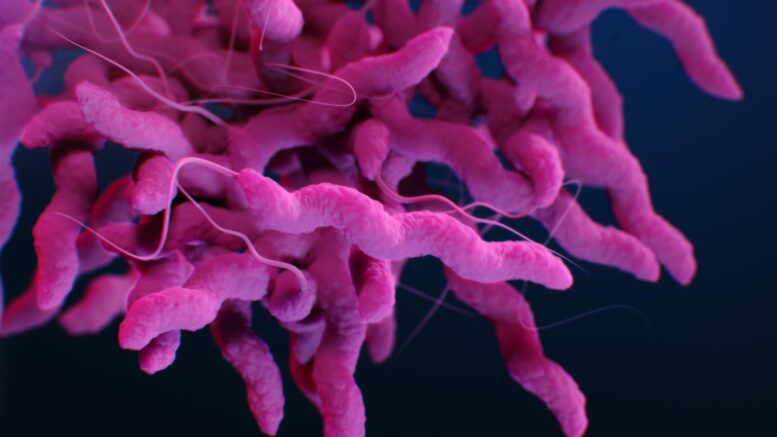 Campylobacter infection, one of the most common foodborne illnesses in the Western world, can also be spread through sexual contact, according to a new research discovery by an Oklahoma University (OU) Hudson College of Public Health faculty member, working in conjunction with colleagues in Denmark.

The team's research has been published in Emerging Infectious Diseases, a journal published by the Centers for Disease Control and Prevention (CDC), and is the first known study to prove this mode of transmission for Campylobacter. During a time when COVID-19 has dominated news about infectious diseases, the research is a reminder that many other pathogens affect lives around the world every day. The study was led by infectious disease epidemiologist Katrin Kuhn, PhD, an assistant professor in the Department of Biostatistics and Epidemiology in the OU Hudson College of Public Health.

"This research is important for public health messaging and for physicians as they talk to their patients about risks associated with sexual contact," Kuhn said. "Although Campylobacter infection is usually not a serious disease, it causes diarrhea, which can result in people missing work, losing productivity or perhaps losing their job. It poses an additional risk for people with underlying health conditions."

Campylobacter infections usually occur when people eat chicken that has not been cooked thoroughly or when juices from uncooked poultry make their way into other food. Infections can also be caused by drinking unpasteurized milk or water that has been contaminated by the feces of infected animals. However, those didn't account for all cases of infection, Kuhn said, and she wondered if there was another route of transmission that remained unproven. An outbreak of Campylobacter infections in northern Europe among men who have sex with men prompted her to study that population of people in Denmark, where she was working when the research began.

Two other bacteria, Salmonella and Shigella, were used as comparisons in the study. Salmonella is spread primarily through infected foods, while Shigella can be transmitted through food or sexual contact. Salmonella has a high infectious dose, meaning people must ingest a significant amount of the bacteria before they become ill. However, Shigella and Campylobacter have low infectious doses, which makes transmission easier.

"That's an additional reason why we believe Campylobacter can be transmitted through sexual contact like Shigella is - because people can become infected when only small amounts of the bacteria are present," Kuhn said.

Campylobacter infections are probably more prevalent than the numbers show. For every one person who goes to the doctor and is diagnosed, epidemiologists estimate that 20 more people are infected, Kuhn said. Although treatment is usually required only for severe cases, complications can occur, especially in people who have compromised immune systems. In some cases, infection can result in reactive arthritis, in which the body's immune system attacks itself, causing pain in the joints. Infection can also lead to Guillain-Barré Syndrome, a serious nerve disorder that can cause paralysis.

"This is an interesting time because COVID-19 has made people more aware of the importance of monitoring infectious diseases in general, not only during a pandemic," she said. "There are many infections like the one caused by Campylobacter that make people sick. It's important that we spotlight the fact that these diseases exist and that we continue to conduct research on their effects and modes of transmission."

"A formal collaboration between OU Hudson College of Public Health and Statens Serum Institut will build a solid foundation for strengthening transatlantic research and, not least, improving the way that we monitor, understand and prevent infectious diseases in Oklahoma," Kuhn said.

2 Comments on "Researcher Identifies New Mode of Transmission for Campylobacter"